Why I Went to Jail on October 5 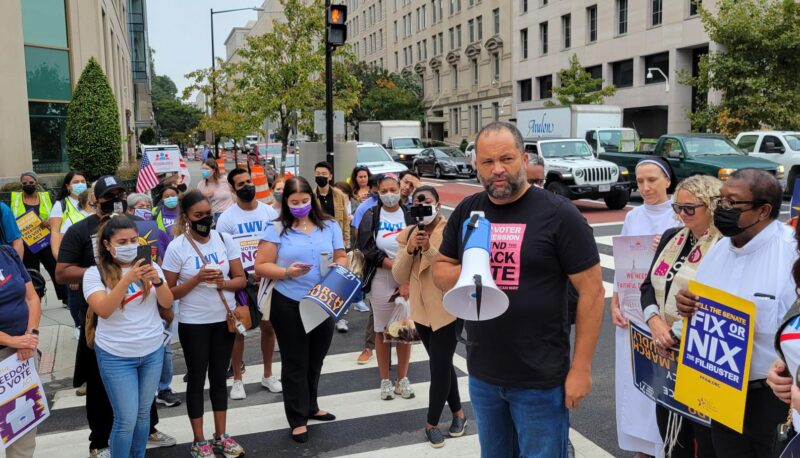 Sometimes friends have to hold friends accountable. That’s why I got arrested outside the White House on Oct. 5. I was there with other civil rights and religious leaders to call on President Joe Biden to do more to protect voting rights that are under attack.

WATCH: This is the moment five brave souls were arrested for fighting for our voting rights.

We know that President Biden supports voting rights. He has called anti-voting laws being passed by Republican state legislators the biggest threat to our democracy since the Civil War. We need him to act like he truly believes those words.

We need a federal voting rights law passed this year. More states are enacting voter suppression. They are abusing the redistricting process to rig future elections and give Republicans more power than they would win in a fair system. They want to shut Democrats out of power in 2022 and 2024. They want to stop progress that millions of Americans voted for when we put President Biden and Vice President Kamala Harris in the White House—and mobilized to elect Georgia Sens. Raphael Warnock and Jon Ossoff.

We have seen this before. When Black people and their allies won political power after the Civil War, white supremacists used violence and illegitimate power to reverse that progress. State-level voter suppression was a core tactic of Jim Crow. The solution then, and the solution today, is strong federal voting rights legislation that will override those state laws and prevent new ones from taking effect.

The good news is that the legislation has been written. It has passed the House of Representatives and it has the support of every Democratic senator. If it gets to the White House, President Biden will sign it.

That bad news is that Senate Minority Leader Mitch McConnell and his Republican colleagues are using Senate filibuster rules to keep voting rights from coming up for a vote. This is 2021, not 1921. President Biden and Senate Democrats cannot let McConnell have the final word on voting rights in this country.

In the 1960s, President Lyndon Johnson did not choose between civil rights and his anti-poverty agenda. He knew the country needed both and he used his mastery of the Senate to get both passed. That’s what we need from President Biden, who has more experience in the Senate than any president since Johnson. The infrastructure bill is vitally important. So is the Build Back Better agenda. But we need the White House to devote the same level of urgency to the infrastructure of our democracy. President Biden must lead Senate Democrats in passing voting rights this year—and getting rid of the filibuster if it stands in the way.

We need strong, effective moral leadership both inside and outside the White House at this moment. The civil rights movement of the 1950s and 1960s was a moral movement. It called on Americans to live up to their own ideals as well as to the promises in our founding documents. It brought the public pressure that compelled LBJ to use the powers of his office to pass civil rights and voting rights legislation.

I was proud to stand outside the White House with so many religious leaders: a Catholic nun representing thousands of her sisters; a Jewish rabbi in whose organization’s office the original Voting Rights Act was drafted; Black Baptist and AME clergy taking their place in the Black church’s long legacy of working for justice. We were joined by representatives of secular social justice and voting rights organizations.

Rev. Timothy McDonald, who pastored in Martin Luther King’s church and who serves as the co-chair of People For the American Way, the organization I lead, led us in singing and prayer and brought powerful words of truth.