Today, under the banner of the Coalition to Protect Wisconsin Elections, a group of seventeen grassroots nonprofit organizations including People For the American Way gathered in the Wisconsin Senate Parlor to protest a batch of anti-democracy voting rights and campaign finance bills slated for Senate consideration tomorrow. The event included voters with their mouths taped shut to symbolize their voices being silenced by the proposed legislation as well as speakers from a range of progressive organizations, including PFAW regional political coordinator Scott Foval. 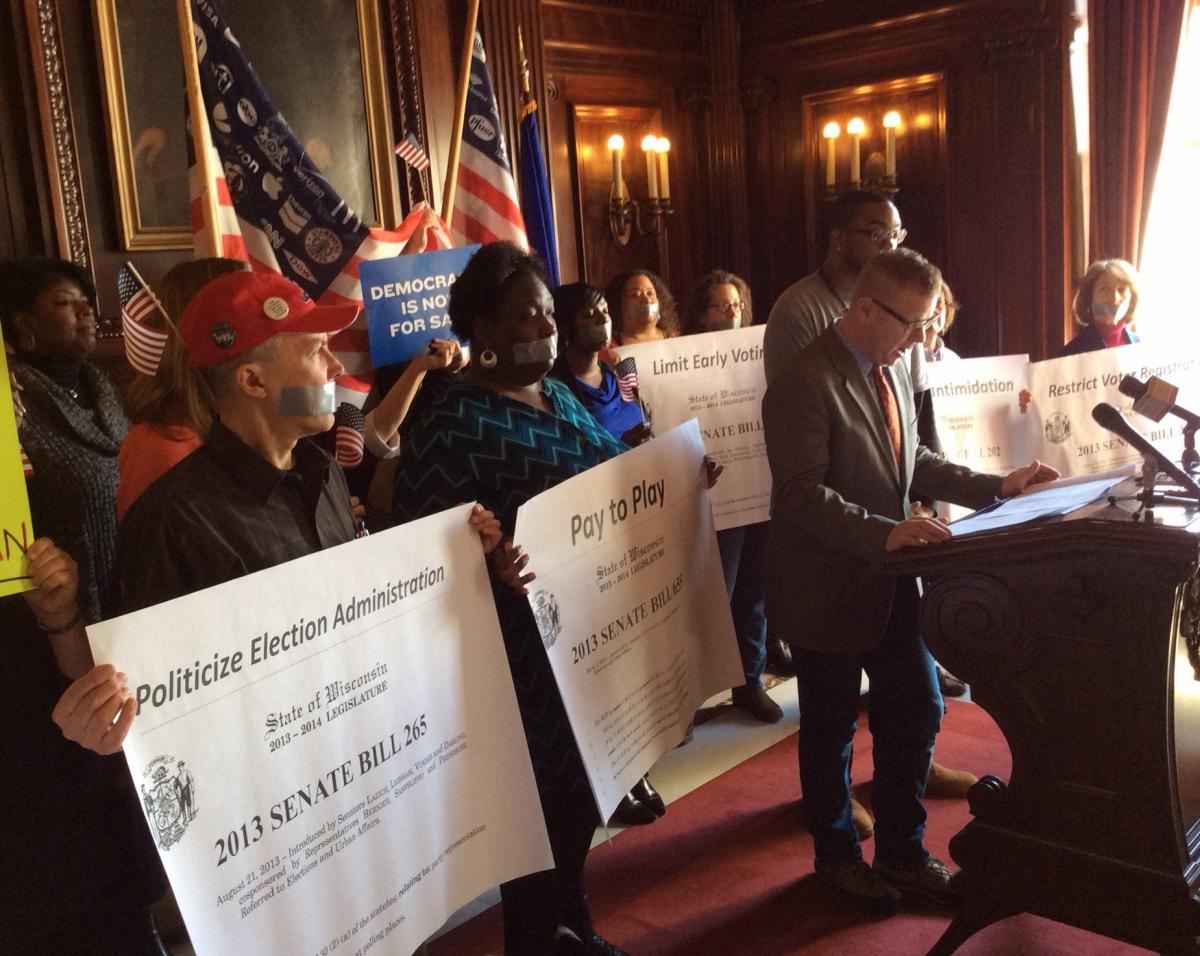 Speakers expressed opposition to a legislative package that will restrict access to a free and fair vote, allow unfettered spending on so-called political “issue ads,” and reduce transparency on reporting political activity in Wisconsin, including:

•  Senate Bill 324, restricting early voting hours and banning the option of weekend voting like “souls to the polls” drives organized by faith communities.

•  Senate Bill 267, making it more difficult for people to register to vote early.

•  Senate Bill 655, repealing current law to allow lobbyists to contribute directly to legislators starting April 15 of election years, even while the legislature is in session; lowering the bar for disclosing political contributions; and allowing unlimited Internet political activity without disclosure to the Government Accountability Board.

•  Assembly Bill 202, requiring poll observers to be allowed as close as three feet to poll workers, despite numerous complaints of harassing and intimidating behavior in recent elections.

Also under consideration, but not yet added to the official Senate calendar, is Senate Bill 654, which would rewrite the rules for disclosing political “issue ads” ahead of an election.  And currently seeking sponsors but not yet introduced is a bill that would eliminate same-day voter registration.

These bills could do serious damage to our democracy. In 2012, hundreds of thousands of Wisconsinites cast their ballots early. Several municipal clerks, who are responsible for administering elections, offered extended hours for voting to allow working people to participate in their democracy by casting their votes after work or on weekends.

In addition, the proposed new disclosure requirements would allow nearly unlimited, undisclosed political ad spending, both in broadcast and on the Internet, as well as increased allowances for solicitation activity for political bundling by political action committees and political conduits.

But “We, the People” are fighting back. Check out the video of today’s event below:

The Georgia Primary Illustrates the Need for Election Protections