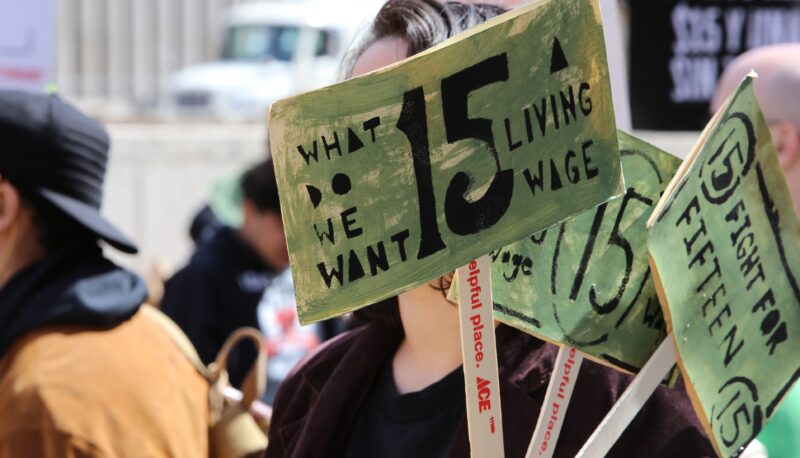 It is time for a maximum push for a new minimum wage.

The federal minimum wage has not budged for more than a decade. But the cost of living keeps rising. So, low-income people fall further and further behind. Raising the minimum wage to $15 an hour would lift millions of working people out of poverty. This is especially true for families headed by women, especially Black women, who are disproportionately clustered in minimum-wage jobs.

It would make a big dent in the income and wealth gaps that make Black Americans poorer and their families more vulnerable. And it would help right something that is seriously wrong with our economy, which keeps pushing a greater share of the country’s overall wealth to the tiny percentage of the most ridiculously rich people at the very top.

This is a moral question as well as an economic one.

If the minimum wage had kept up with the rise in workers’ productivity over the years, it would now be closer to $25 an hour. But it didn’t.

In other words, as a society, we have been effectively stealing from the people who already have the least.

So this is about justice. And it is specifically about racial justice.

According to congressional testimony from the Economic Policy Institute last month, “Due to the impacts of structural racism and sexism, women and Black and Hispanic men are concentrated in low-wage jobs” and would greatly benefit from a higher minimum wage.

A higher percentage of Black women are full-time minimum wage workers than any other racial group. More than one-third of Black women have been in frontline jobs during the pandemic, where they are still paid less than white men.

This is about the health of our children and families. About 80 percent of Black women are sole, primary, or co-breadwinners for their households. Bringing home a few thousand more dollars per year could be transformative for low-income families.

When he was campaigning, President Joe Biden told voters that he supported a $15 minimum wage. House Democrats included it in their most recent COVID relief bill. But because of an interpretation of Senate rules, the minimum wage may not be included in the final bill.

That cannot be the final word. The administration must put its weight behind the Raise the Wage Act of 2021, which would get us to a $15 minimum by 2025.

For congressional Democrats and the Biden-Harris administration, fighting for a $15 minimum wage is a place where moral obligation and political interests intersect.

Biden and Democrats campaigned on a $15 minimum. And they are in the White House with a Senate majority because Black women organized and turned out the vote.

Rev. William Barber recently reminded us that Rev. Martin Luther King Jr. called for a $2 an hour minimum wage almost 60 years ago. That would be over $15 today if it kept up with inflation.

King talked about racial equality as an unfulfilled promise from the nation’s Founding Fathers.