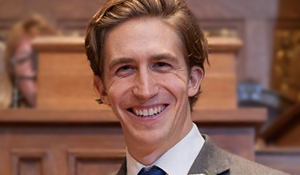 State Representative Daniel Riemer represents the 7th Assembly District in Wisconsin. He was first elected in November 2012 at age 25 and was the youngest man serving in the Wisconsin Legislature during his first term. Riemer was re-elected in 2014. He currently serves on the Assembly committees on Health; Mental Health Reform; Veterans and Military Affairs; Ways and Means; and Workforce Development. Riemer also serves on the Law Revision Committee and the State Fair Park Board. In the 2015-16 session Riemer authored legislation to strengthen access to Medicaid, increase tax credits for working families, and resettle refugees from Syria in Wisconsin. Riemer recently participated in an international conference on the EU refugee crisis at the Ditchley Foundation in the United Kingdom. Riemer graduated from the University of Wisconsin-Madison Law School, the University of Chicago, and Milwaukee Public Schools. He is a Milwaukee native and lives on Milwaukee’s South Side.