With the midterm elections over, Mitch McConnell is calling the Senate back for a lame duck session with one overriding goal: pack the federal courts with as many of Donald Trump’s extreme judicial nominees as possible, just as the GOP has been doing since Trump took office.

But this effort will take place under very different circumstances than before. First, the American people have just risen up and said no to Donald Trump and the Republican agenda, delivering the House of Representatives to the Democratic Party. The Senate remains under GOP control only by happenstance of which states had a Senate election this year.

In addition, the Senate’s rush to confirm one narrow-minded elitist after another is occurring in the shadow of the corrupt process of Brett Kavanaugh’s confirmation to the Supreme Court. The American people saw Judiciary Committee chairman Chuck Grassley abuse his position as he:

The savaging of Blasey Ford showed the nation that Republicans would say anything, do anything, and destroy anybody in order to get a fellow right-wing Republican onto the Supreme Court.

The context of nomination fights has also shifted radically in the last 48 hours with Donald Trump’s firing of Attorney General Jeff Sessions and his appointment of loyalist Matthew Whitaker as acting Attorney General. The move is an obvious attempt to constrain and undermine the Mueller investigation—a direct challenge to the Constitution and the rule of law the should inform every discussion about judicial nominations until it is resolved.

Despite the changed circumstances and context, we fully expect McConnell and his allies to double down on trying to confirm as many extremists to the lower federal courts as they can. Indeed, as described below, they have been doing so since Trump took office.

Senate Republicans Made a 180-Degree Turn When Trump Took Office

During the lame duck, we can expect to hear GOP accusations that Democrats are being obstructionists. Any such claim is laughable.

During the Obama presidency, Senate Republicans used one procedural rule after another not just to oppose qualified judicial nominees, but also to dramatically slow down the confirmation of ones they supported—even ones they themselves had recommended to the White House. They did this despite being in the minority for all but the final two years.

And when they finally held the majority in 2015-2016, staffing the federal bench was far from a priority for them. McConnell made this clear in an interview with Hugh Hewitt in June of 2015, at a point when he had allowed confirmation votes for only four nominees:

[McConnell]: Well, so far, the only judges we’ve confirmed have been federal district judges that have been signed off on by Republican Senators.

[Hewitt]: And so you expect that that will continue to be the case for the balance of this session?

Indeed, he lived up to his promise of lackadaisicalness: During Obama’s last two years, the GOP-controlled Senate confirmed the fewest number of lower court nominees since the Truman era: a mere 20 circuit and district judges.

But when Trump took office and began nominating extremists vetted by the Federalist Society and Heritage Foundation, all the energy Senate Republicans had been using to keeping vacancies open went to filling them as quickly as possible. McConnell now says that “the most important confirmations we have are lifetime appointments to the judiciary. … [T]his is my top priority.”

So instead of a mere 20 confirmations of Obama’s judicial nominees as in 2015-16, the GOP-controlled Senate has already confirmed an astonishing 82 of Trump’s.

The contrast between how Republicans treat nominees based on partisanship is striking, especially on the circuit level, where the GOP has put much of its effort. It has taken an average of 138 days for the Senate to confirm Trump’s circuit judges, as opposed to 232 days for Obama’s at this point in his presidency. That’s a difference of nearly 100 days.

Their laser-like focus on stacking the circuit courts is paying off for them: The Senate has already confirmed an unprecedented 29 Trump circuit court nominees in less than two years, dwarfing Obama’s 11 at the same point. (The numbers are equally lopsided for district courts: 53 for Trump vs. 30 for Obama.) And that isn’t because of a disparity in the absolute number of nominees: More than three fourths of Trump’s circuit court nominees have already been confirmed, while fewer than half of Obama’s had been confirmed at this point. 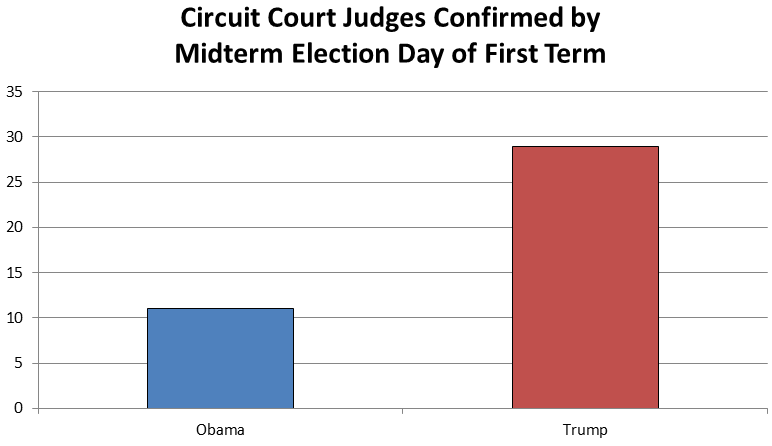 The nominees getting so quickly approved are also not a diverse group. While 45 percent of Obama’s confirmed circuit judges at this point were people of color, only 10 percent of Trump’s are (James Ho, John Nalbandian, and Amul Thapar; thus far, Trump has not nominated a single African American or Latinx individual to fill a circuit court of appeals vacancy). 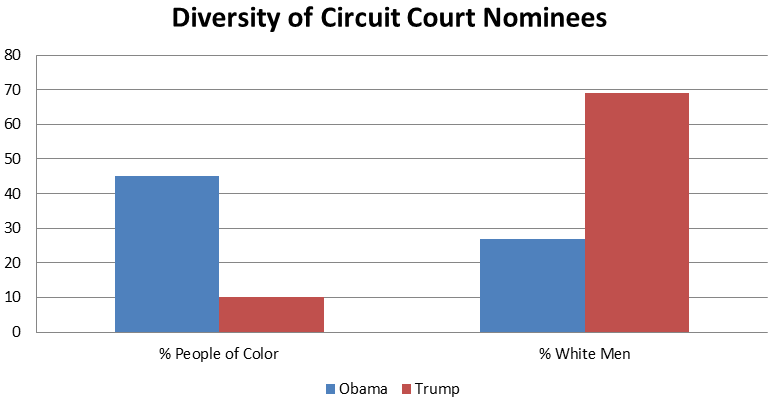 That disparity remains when you include district court judges, as well: Only 9 percent of Trump’s are people of color, while 39 percent of Obama’s at this point were.

By Hook or By Crook

As People For the American Way has covered in great detail, Senate Republicans have bulldozed over a number of longstanding protections and norms in order to get so many judges confirmed despite their disqualifying records.

Chuck Grassley has done away with the longstanding requirement that no judicial nominee gets a hearing without the consent of both home state senators. He strictly adhered to that practice for Obama nominees, but changed course when Trump became president. Unilaterally changing the rules based solely on who it benefits is the antithesis of the rule of law, and it is toxic to a democracy. Circuit nominees Michael Brennan (Seventh Circuit), David Porter (Third Circuit), Eric Miller (Ninth Circuit), Chad Readler (Sixth Circuit), Eric Murphy (Sixth Circuit) and Ryan Bounds (Ninth Circuit) all had committee hearings over the strong objections of one or even both of their home state senators. McConnell has extended the abuse of power by scheduling confirmation votes for these nominees once they reach the floor.

In addition, Grassley held two confirmation hearings during the current recess over the objections of the Democrats, including for highly controversial nominees Allison Jones Rushing (Fourth Circuit) and Eric Miller (Ninth Circuit). When the recess was announced, every other Senate committee postponed hearings that had been scheduled during that time. Never before has the Judiciary Committee held nominations hearings during the pre-election recess without the minority party’s consent.

Another of Grassley’s abuses is holding hearings for more than one circuit nominee at a time over the Democrats’ objections. Because of the particular importance of those lifetime appellate positions, senators need more time to examine the nominees’ records and ask them questions at a hearing. Having two of them on the same panel halves the time available to ask questions of each, and impedes senators’ ability to research adequately in order to ask the most important questions. The previous chairman, Patrick Leahy, never overrode his colleagues’ objections to stack a hearing that way; the two times he had more than one circuit nominee at a hearing, it was with the Republicans’ consent.

The American Bar Association has a nonpartisan panel that evaluates every judicial nominee’s abilities without any reference to ideology. A majority finding of unqualified is unusual and, indeed, none of President Obama’s nominees was deemed unqualified. In contrast, the panel has found six of President Trump’s nominees to be unqualified, in three cases unanimously. Unanimous agreement on such a devastating evaluation is exceedingly rare and had occurred only twice before since 1989 (the first year available on the ABA’s website). This is bound to happen when the White House prioritizes political ideology and loyalty over qualifications for these lifetime positions, and they have not dissuaded Senate Republicans from supporting Trump’s nominees.

As described in People For the American Way’s recent report Confirmed Judges, Confirmed Fears, Trump’s judges are already having a significant impact on the law, harming the rights of workers, religious and other minorities, women, voters, immigrants, and many more.

Below is a sampling of the disturbing nominees who have been approved by the Judiciary Committee and will likely get a floor vote during the lame duck session:

Thomas Farr has long been the go-to lawyer for North Carolina Republicans having to defend their voter suppression tactics in court. It appears he lied to the Judiciary Committee when he claimed not to have been part of a notorious scheme by Jesse Helms to intimidate African Americans from voting. Farr has been nominated to the Eastern District of North Carolina.

Howard Nielson politicized hiring at the Justice Department so corruptly during the Bush era that the department’s inspector general formally recommended that he “should never get a job with the Department or, in my view, any other Federal agency.” He also argued that a judge should recuse himself from a marriage equality case because he was gay and might one day want to marry his partner. He has been nominated to the District of Utah.

Michael Truncale attacked Texas Democrat Wendy Davis for her support of the Constitution, saying that her “claim to fame is the fact that she wants to kill babies five months into term.” He also declared that “voter fraud makes a mockery of our elections” but admitted during his confirmation hearing that this was not based on any research whatsoever, but was instead based on one personal experience that he had no evidence had actually involved voter fraud. He has been nominated for the Eastern District of Texas.

Wendy Vitter has a long record supporting laws burdening women’s access to abortion. She urged people at an anti-choice conference to ask their physicians to provide their patients with pamphlets containing the lie that women using birth control pills are more likely to die a violent death. She made her unsuitability for the bench even clearer by lying under oath to the Judiciary Committee about it. She has been nominated to the Eastern District of Louisiana.

Patrick Wyrick is on President Trump’s list of potential Supreme Court nominees, suggesting he has passed Trump’s litmus test of opposition to health care and abortion rights. He left private practice to become a political appointee in Oklahoma, where he defended sharp restrictions on abortion rights and attacked efforts to protect the environment. Wyrick believes that the Constitution prohibits many if not most actions by federal agencies, starting with the New Deal, even asserting that “the whole administrative state is unlawful.” He has been nominated to the Western District of Oklahoma.

After years of preventing President Obama from filling vacancies on the federal courts, Senate Republicans have become a juggernaut in confirming President Trump’s nominees. They are set on continuing their efforts to stack the nation’s federal courts with ultra-right elitist judges. Democrats should use whatever power they have as the minority party to prevent the confirmation of Trump’s dangerously unqualified judicial nominees, both during the lame duck and for the next two years. Republicans will call it mindless obstruction, but it is what Democrats must do to protect our nation’s judicial system and the people across America whose rights are at risk from the decisions of Trump judges.