2015: A Year of GOP Obstruction for Judicial Nominees - People For the American Way
Skip to main content

2015: A Year of GOP Obstruction for Judicial Nominees

Contact: Layne Amerikaner or Laura Epstein at People For the American Way

To: Interested Parties
From: Paul Gordon, Senior Legislative Counsel, People For the American Way
Date: December 21, 2015
Re: 2015: A Year of GOP Obstruction for Judicial Nominees

With the Senate having closed up shop for the year, one thing is clear: the Republican majority has failed miserably in carrying out one of the most important jobs entrusted to the Senate by the U.S. Constitution: confirming judges.

Courts are the infrastructure of justice, just as important to our constitutional rights as roads and bridges are to transportation.  Either in spite of this or because of this, Senate Republicans have abused their position in the majority to stymie President Obama’s efforts to put qualified people on our nation’s federal courts.  In so doing, they are weakening the entire third branch of the United States government.

Failing to confirm judges has never been the norm even when the Senate and the White House are held by different parties.  A useful basis of comparison is George W. Bush’s final two years in office, when Democrats took over the Senate after the 2006 midterms.  In 2007, the first year as the majority, the Democratic Senate confirmed 40 of President Bush’s circuit and district court nominees (with a total of 68 by the end of 2008).  In stark contrast, the McConnell Senate confirmed only 11 judges this year. 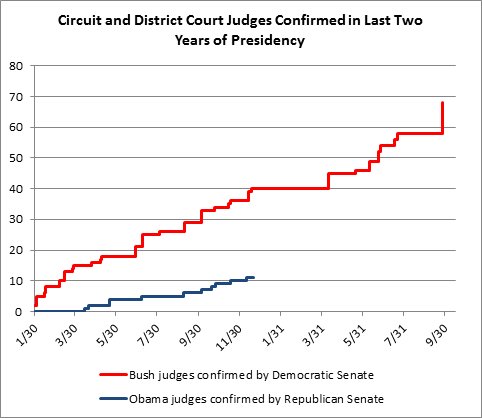 Today, in stark contrast, the number of circuit and district court vacancies is climbing, from 40 at the beginning of the year to 62 today, a nearly 60% increase. 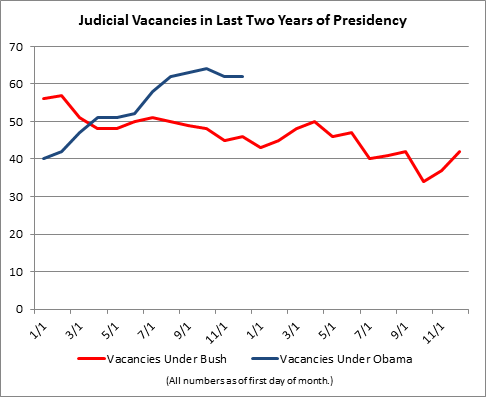 We see the same thing with judicial emergencies, a formal designation assigned by the Administrative Office of U.S. Courts for vacancies where the caseload per judge is so high that it endangers access to justice. Judicial emergencies have skyrocketed from 12 at the beginning of the year to 31 today. As the chart below shows, Democrats in the Senate during Bush’s last two years did not allow the number of judicial emergencies to increase in a similar fashion, and in fact the number generally remained steady or decreased during most of those two years. 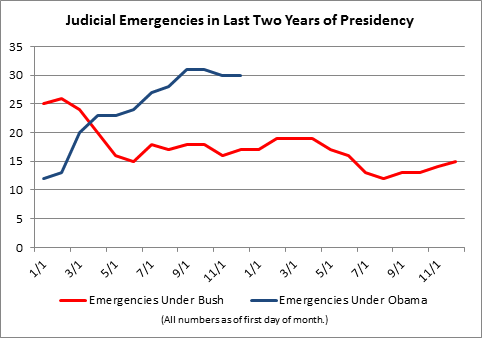 The endeavor to sabotage our nation’s judiciary involves multiple senators playing different roles.  Most prominently, no confirmation vote is scheduled unless Majority Leader Mitch McConnell agrees to it.  When nominees fully vetted by the Judiciary Committee languish on the Senate floor for month after month after month, with no reason for the delay, that is because Senator McConnell wants it that way.  Every nominee confirmed this year was forced to wait inordinately long after committee approval for a vote, even though they had strong bipartisan support and, in almost all cases, had no opposition whatsoever.

And now, the Senate has left town without voting on 13 fully vetted circuit and district court nominees.  Five have been waiting three months or more since committee approval, two of them since July.  All were approved by the Judiciary Committee unanimously.  Eight are women or people of color, and nine would fill judicial emergencies.

(Also denied floor votes are five nominees for the Court of Federal Claims and one for the Court of International Trade, all approved without opposition by the Judiciary Committee last year in the previous Congress and then again in February in the new one.)

Iowa’s Chuck Grassley, chairman of the Judiciary Committee, also plays a key role in the obstruction.  Senator Grassley held only eight confirmation hearings for circuit and district court nominees this year, not nearly enough to process the available nominees.  In part because of that slowdown, nominees this year have tended to wait much longer than necessary for their hearings … unless they happen to be Grassley’s hand-picked judges from Iowa.  He also routinely delays without explanation committee votes that he himself called … again, except for Iowa nominees and those lucky enough to be grouped with them.  Grassley chose to let the Senate end the year without holding a hearing for five long-waiting nominees: One was nominated in February, two were nominated in July, and two were nominated in September, more than three months ago.

Of particular note are those Republican senators who get great local press for saying good things about nominees from their states … but who, behind the scenes, collaborate with party leaders’ efforts to obstruct those very nominees.  Perhaps no one exemplifies this more than Pennsylvania’s Pat Toomey, who simultaneously praised and helped block L. Felipe Restrepo, President Obama’s nominee for the Third Circuit Court of Appeals.  Restrepo was nominated in November of 2014 with the support of Toomey and Democrat Bob Casey.  He could have been confirmed long ago.  Unfortunately, Toomey cooperated with Senator Grassley’s efforts at delay, so that Restrepo didn’t get a hearing until seven months after his nomination.  Then, even though Restrepo was approved unanimously by the committee in July, Senator Toomey collaborated with his party leadership’s plans to delay a floor vote for as long as possible.  Facing increasingly critical in-state press and disappointed constituents, Toomey finally made a public statement in early December calling for a vote, then meekly stood by when Senator McConnell – with no explanation – announced that Restrepo would not get a vote until January 11, more than a month later.

As if Republicans hadn’t already injected enough partisanship into the process, they floated a plan in December to politicize the judicial confirmation process even more for last-minute year-end confirmations.  Specifically, they pushed a plan to skip over blue-state nominees in favor of red-state nominees who had been waiting less time for a vote.  Recall that every one of these nominees had cleared the Judiciary Committee unanimously, so there was no disagreement on their qualifications. (Ultimately, Democrats prevented them from carrying out this plan.)

Next year may be even worse, as Senate Republicans go to even more extremes to keep judicial seats vacant so that a Republican president (they hope) can fill them in 2017.

This year shows that even when Republicans agree with Democrats that particular nominees are highly qualified to fill critically important positions in our nation’s judiciary, the GOP regards moving the confirmation process along as a major concession to the Democrats.  Our nation deserves better.

What we deserve are home-state senators who don’t work to block qualified nominees from having committee hearings.  We deserve a Judiciary Committee chairman who gives nominees an opportunity to be questioned about their qualifications and face a vote by committee members.  And we deserve a Senate Majority Leader who promptly schedules confirmation votes for fully vetted nominees.