Edit Memo: Instead of Protecting the U.S. Judiciary, Senate Republicans are Fighting to Help Donald Trump Transform It - People For the American Way
Skip to main content

Edit Memo: Instead of Protecting the U.S. Judiciary, Senate Republicans are Fighting to Help Donald Trump Transform It

Contact: Drew Courtney or Laura Epstein at People For the American Way

To: Interested Parties
From: Paul Gordon, Senior Legislative Counsel, People For the American Way
Date: September 6, 2016
Re: Instead of Protecting the U.S. Judiciary, Senate Republicans are Fighting to Help Donald Trump Transform It

After their seven-week vacation, Senate Republicans should be fully recovered from their exhausting pace in processing judicial nominations up through July. After all, it takes a great deal of energy and ingenuity to come up with excuses for refusing to hold committee hearings for people nominated many months ago, and thus needlessly creating a bottleneck in committee; for refusing to allow confirmation votes on nominees long ago fully vetted and approved by the Judiciary Committee, and thus needlessly creating a backlog on the floor; and for staying far from the Senate floor while a nominee you recommended and claim to support is being blocked by GOP leadership, thus demonstrating that GOP senators are far more interested in serving Mitch McConnell than they are in serving their constituents.

For the past year and a half, Majority Leader Mitch McConnell and Judiciary Committee Chairman Chuck Grassley have been blocking hearings and votes on President Obama’s judicial nominees and keeping seats open for a hypothetical future Republican president to fill. But in recent months they have conducted their obstruction specifically so Donald Trump can fill the vacancies … including the Supreme Court seat that Merrick Garland was nominated to fill nearly half a year ago.

While their refusal even to hold a hearing for Judge Garland has garnered significant attention, the GOP’s deliberate sabotage of the rest of the federal judiciary is nothing new. Since Republicans have taken control of the Senate, the pace at which they’ve chosen to process all of President Obama’s judicial nominations has fallen far short of what precedent would dictate.

Refusing to confirm judges has never been the norm even when the Senate and the White House are held by different parties. A useful basis of comparison is George W. Bush’s final two years in office, when Democrats took over the Senate after the 2006 midterms. The McConnell Senate has confirmed only 20 circuit and district court judges during this Congress (along with two Court of International Trade nominees). In contrast, at this same point in Bush’s last two years, the Democratic Senate had already confirmed 58 of President Bush’s circuit and district court nominees, nearly three times as many as the current Senate.

Nor did progress stop after summer recess and during the fall campaign. In September of 2008, then-Chairman Patrick Leahy held committee hearings and then committee votes for ten of George Bush’s judicial nominees, all of whom were confirmed in less than one minute by unanimous consent before the month was out, for a total of 68 by the end of 2008.

Now, in September of 2016, Republicans have an opportunity and a responsibility to fill dozens of vacancies. In addition to Merrick Garland, there are 29 circuit and district court nominees still bottled up in the Judiciary Committee. Only six of them have even had hearings, let alone a committee vote; two of the nominees (both from Pennsylvania) had their committee hearings last year, but Grassley still has not brought them up for a vote.

In addition, there are 20 circuit and district court nominees who have been vetted and approved by Judiciary Committee and who could — and should — have confirmation votes as soon as the Senate returns to Washington. More than a third of these have been pending on the floor for more than six months, including four who advanced from committee back in 2015.

These 20 pending men and women include highly qualified nominees such as Wisconsin’s Donald Schott, who would fill the oldest circuit court vacancy in the nation, a Seventh Circuit judgeship that has been empty since January of 2010. Schott earned the ABA’s highest rating of his qualifications, and he advanced through the Judiciary Committee with strong bipartisan support. He also has the bipartisan support of his home-state senators, Republican Ron Johnson and Democrat Tammy Baldwin.

They also include North Dakota’s Jennifer Klemetsrud Puhl, who would serve on the Eighth Circuit. Approved by the Judiciary Committee unanimously, Puhl will break an important barrier … if Sen. McConnell allows the Senate to vote on her: No woman has ever served as a federal judge at any level in North Dakota, circuit or district. In addition, even though the Eighth Circuit covers seven states (Arkansas, Iowa, Minnesota, Missouri, Nebraska, North Dakota, and South Dakota), only two judges in this court’s history have been women. Like Donald Schott, Puhl has the bipartisan support of her home state senators, Republican John Hoeven and Democrat Heidi Heitkamp.

The figure below shows the stark difference in the pace of circuit and district judicial confirmations under today’s Republican-controlled Senate as compared to the Democratic-controlled Senate of Bush’s last two years. 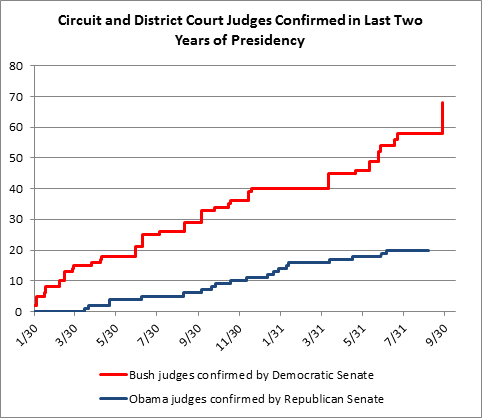 Today, in stark contrast, the number of circuit and district court vacancies is climbing, more than doubling from 40 at the beginning of the year to 87 today.

We see the same thing with judicial emergencies, a formal designation assigned by the Administrative Office of U.S. Courts for vacancies where the caseload per judge is so high that it endangers access to justice. Judicial emergencies have skyrocketed from 12 at the beginning of the new Congress to 32 today .* As the chart below shows, Democrats in the Senate during Bush’s last two years did not allow the number of judicial emergencies to increase in a similar fashion, and in fact the number generally remained steady or decreased during most of those two years. 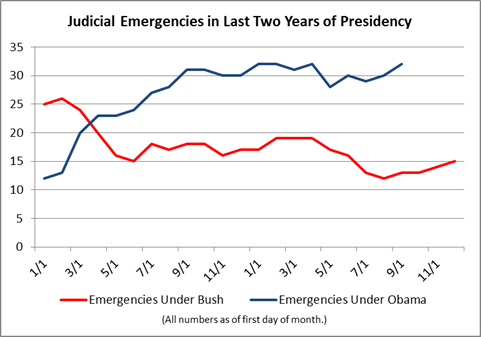 The Judiciary Committee and Senate should be busy this month moving Merrick Garland’s Supreme Court nomination, as well as those of the many, many qualified judicial nominees President Obama has already nominated. The committee has a hearing scheduled this week for several judicial nominees from Texas, but Chairman Grassley and his colleagues have the time and the obligation to hold many more. The judicial branch of the United States is unique, in that it relies completely on the other two branches for its continued existence. President Obama has been fulfilling the executive’s obligation by identifying and nominating qualified people.

But the Republicans controlling the Senate have refused to do their job by allowing fair consideration of President Obama’s nominees throughout the federal judiciary.  Instead, they’re playing political games in order to keep vacancies open for their party’s nominee to fill.

* – Judicial emergencies are based on caseloads, which are weighted to reflect the wide variations in time and resources generally associated with different types of cases. On April 15, the Administrative Office of U.S. Courts list of emergency vacancies began to incorporate a new weighting system adopted a month earlier by the Judicial Conference of the United States. As a result, the number of officially designated judicial emergencies dropped from 34 on April 14 to 28 the next day, a drop that had nothing to do with Senate action.