Although national attention has been focused on the ongoing GOP blockade of President Obama’s nominee to the Supreme Court, Merrick Garland, commentators should remember that the Republicans’ campaign of obstruction aimed at President Obama’s judicial nominees is nothing new. Since Republicans have taken control of the Senate, the pace at which they’ve chosen to process all judicial nominations has fallen far short of what precedent would dictate.

Failing to confirm judges has never been the norm even when the Senate and the White House are held by different parties. A useful basis of comparison is George W. Bush’s final two years in office, when Democrats took over the Senate after the 2006 midterms. In 2007, the first year as the majority, the Democratic Senate confirmed 40 of President Bush’s circuit and district court nominees (with a total of 68 by the end of 2008). In stark contrast, the McConnell Senate has confirmed only 17 judges during this congress. 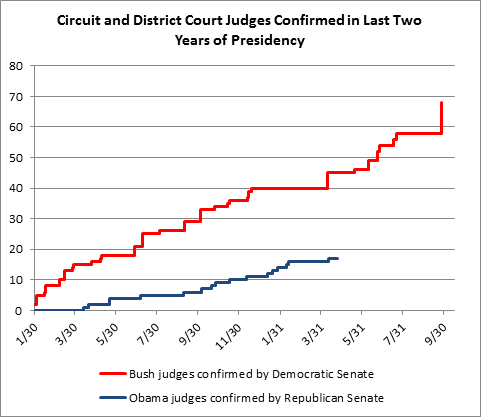 Today, in stark contrast, the number of circuit and district court vacancies is climbing, from 40 at the beginning of the year to 74 today, an 85% increase. 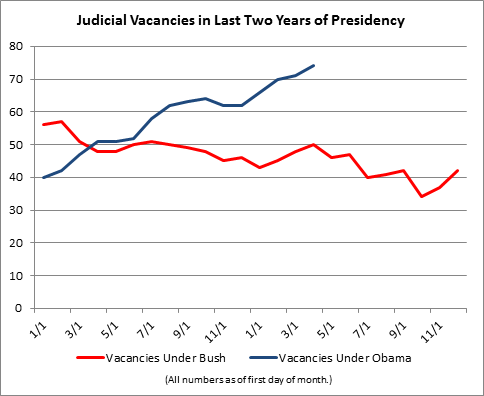 We see the same thing with judicial emergencies, a formal designation assigned by the Administrative Office of U.S. Courts for vacancies where the caseload per judge is so high that it endangers access to justice. Judicial emergencies have skyrocketed from 12 at the beginning of the new congress to 32 as of April 1 of this year*. As the chart below shows, Democrats in the Senate during Bush’s last two years did not allow the number of judicial emergencies to increase in a similar fashion, and in fact the number generally remained steady or decreased during most of those two years. 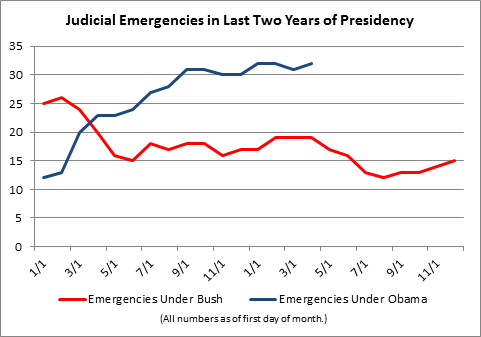 Courts are the infrastructure of justice, just as important to our constitutional rights as roads and bridges are to transportation. Either in spite of this or because of this, Senate Republicans have abused their position in the majority to stymie President Obama’s efforts to put qualified people on our nation’s federal courts. In so doing, they are weakening the entire third branch of the United States government.

* – Judicial emergencies are based on caseloads, which are weighted to reflect the wide variations in time and resources generally associated with different types of cases. On April 15, the Administrative Office of U.S. Courts list of emergency vacancies began to incorporate a new weighting system adopted a month earlier by the Judicial Conference of the United States. As a result, the number of officially designated judicial emergencies dropped from 34 on April 14 to 28 the next day, a drop that had nothing to do with Senate action.