Edit Memo: The Numbers Make Clear: Republican Senators Still Refuse to Do Their Jobs - People For the American Way
Skip to main content

To: Interested Parties
From: Paul Gordon, Senior Legislative Counsel, People For the American Way
Date: September 27, 2016
Re: The Numbers Make Clear: Republican Senators Still Refuse to Do Their Jobs

Earlier this month, the Senate returned from the longest summer recess in 60 years.  That recess came even though Senate Republicans hadn’t found the time to hold a confirmation hearing for Supreme Court nominee Merrick Garland, or vote on lower court judges who had long ago been fully vetted and approved by the Judiciary Committee.

Now, three weeks after returning to town, the Senate is on the verge of recess again at least until after the November elections, having put far more time into actively blocking confirmation votes than holding them.  Without enough judges, the entire third branch of the United States government fails to perform its functions effectively, delaying or denying justice for millions of people and businesses across America.

Since the Senate returned three weeks ago:

In fact, McConnell has allowed only six judicial confirmation votes in the past six months.  Only 20 circuit and district courts and two International Trade nominees have been confirmed so far this entire Congress, which is breathtakingly low by historical standards.

Senate GOP leaders could have done what Democratic leaders did at the same point eight years ago, two months before the election to replace George W. Bush.  During the month of September, then-chairman Patrick Leahy held committee hearings and votes for ten Bush nominees, and then-Majority Leader Harry Reid arranged for all ten to be confirmed at the same time by unanimous consent on September 26.

Despite the two-dozen Obama nominees on the Senate floor, it actually wouldn’t take that long to confirm them.  Confirming those ten Bush nominees in 2008 took less than one minute of Senate floor time.

Less than one minute—that bears repeating, because Senate Republicans this month have spent a lot more time than that actively blocking efforts to have votes on long-waiting judicial nominees.  The details of that obstruction are worth recounting, because they show just how ridiculous the GOP’s efforts are.

On Wednesday, Sept 7, several Democrats went to the floor and highlighted the outrageously slow pace of judicial confirmations.  Each asked for unanimous consent (UC) to hold confirmation votes.  Sen. Heidi Heitkamp began, asking for UC to vote on all 20 of the circuit and district court nominees then pending on the Senate floor (2 circuit, 18 district).  Most had been approved by the Judiciary Committee as long ago as May or earlier.  Four had their committee approvals last year, including Tennessee’s Edward Stanton III and New Jersey’s Julien Neals, both African American nominees with home-state senators’ support … or so it seemed.

Senator McConnell asked to modify the UC request to a mere four nominees to be voted upon at some unknown future date.  All were white, all four had been waiting for significantly less time TN’s Stanton, and three had been waiting less time than New Jersey’s Neals.  This would have skipped over a number of other nominees who had been waiting longer than one of the nominees McConnell was including.  Rather than permit McConnell to violate regular order and allow his favored, Republican-supported nominees to “jump the line” significantly, Sen. Cory Booker spoke up for the Democratic caucus, rejecting McConnell’s plan.  At that point, McConnell objected to Sen. Heitkamp’s original request.

Since 20 thoroughly vetted nominees ready for confirmation months ago was clearly too much for McConnell, Sen. Tammy Baldwin sought UC to vote on just the oldest 14, which included a 7th Circuit nominee from Wisconsin named Donald Schott who would fill a seat that has been vacant for more than six years.

Sen. Mazie Hirono tried next: What if we take the circuit court nominee off?  She sought UC on the remaining 13 district court nominees.

Sen. Elizabeth Warren came up next.  What about the ten longest-waiting nominees?  As with all the other Democrats’ efforts, this one included Tennessee’s Stanton.

This time, it was Tennessee’s Lamar Alexander who said no—no to a vote on a Tennessee nominee whose nomination has been left hanging since last year, and who Sen. Alexander claims to support.

At this point, Cory Booker returned to the floor and pointed out that McConnell’s “compromise” of four judges had skipped over the two African American nominees who had been waiting the longest.  So he made a UC request just for them:  Edward Stanton of Tennessee (waiting for a floor vote since October 29 of last year), and Julien Neals of New Jersey (waiting since November 5 of last year).

This time it was GOP Sen. Bill Cassidy of Louisiana who said no.  And Sen. Alexander?  He did not speak up for his nominee at all.  Even with a UC for just Stanton and one other nominee who have been waiting since last year, Sen. Alexander’s “support” was MIA.

And the excuse that McConnell and his obedient GOP senators gave for not allowing a vote even on two consensus nominees waiting since last year?  They repeatedly claimed that Republicans were being fair to President Obama’s nominees overall during his presidency, citing the fact that there have been more Obama nominees confirmed than Bush had.

Misleadingly, he failed to say that there have been more vacancies to fill during Obama’s presidency, which is why there have been more confirmations.  He also failed to point out that Republicans had forced cloture votes on an incredible 93 of the confirmed nominees while they were the minority party; it takes gall to take credit for confirmation votes that you and your party actively tried to prevent.

But perhaps most importantly, even if McConnell’s explanation weren’t intentionally misleading, it would still be completely irrelevant.  An increasing number of courtrooms across the country are experiencing troubling, extended vacancies that are harming their communities.  They need judges desperately, and there are fully vetted nominees willing to step in to their robes and start work as soon as possible.  Why not let them?  In what possible way would treatment of other nominees over the past seven years justify denying access to justice to communities today? Is there some unknown quota on the number of confirmations that only Senator McConnell knows about?

So we’re left with a Republican Party that leaves town again having taken no confirmation votes on lower court nominees, and still refusing to even hold a committee hearing for Merrick Garland. 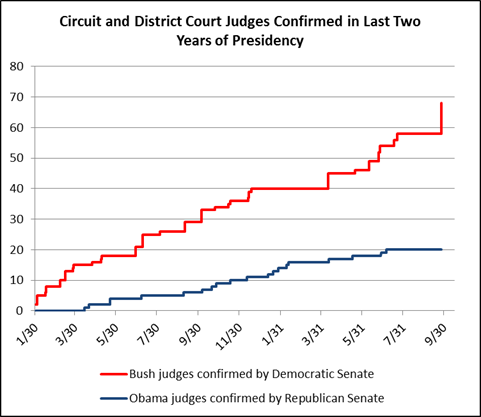 Today, in stark contrast, the number of circuit and district court vacancies is climbing, more than doubling from 40 at the beginning of the year to 87 today.  (Including the Supreme Court and International Trade vacancies, the increase has been from 43 to 91.) 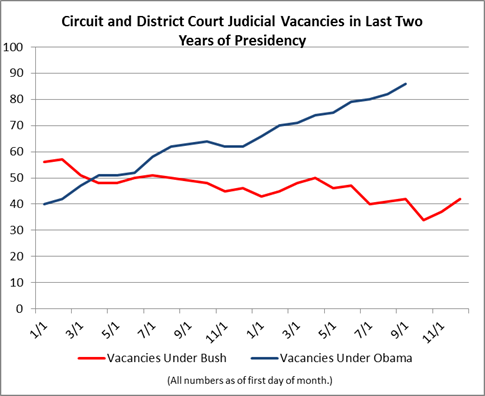 We see the same thing with judicial emergencies, a formal designation assigned by the Administrative Office of U.S. Courts for vacancies where the caseload per judge is so high that it endangers access to justice. Judicial emergencies have skyrocketed from 12 at the beginning of the new Congress to 35 today1. As the chart below shows, Democrats in the Senate during Bush’s last two years did not allow the number of judicial emergencies to increase in a similar fashion, and in fact the number generally remained steady or decreased during most of those two years. 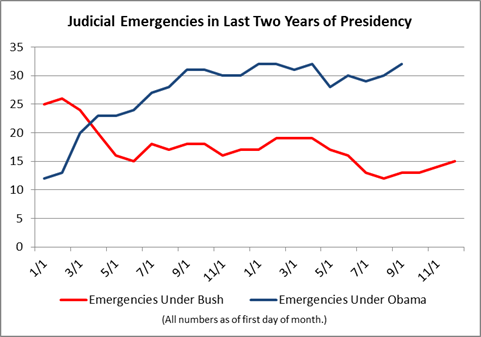 So just three weeks after returning from an unearned (and record) seven-week vacation, the GOP-controlled Senate prepares to leave town having made no progress on filling the Supreme Court vacancy, and having spent far more time on the Senate floor blocking confirmation votes than it would have taken to confirm those same nominees.

And after all this time refusing to do their jobs, many of these senators are now asking the voters for another six years.  And they do it without blushing.


[1] Judicial emergencies are based on caseloads, which are weighted to reflect the wide variations in time and resources generally associated with different types of cases. On April 15, the Administrative Office of U.S. Courts list of emergency vacancies began to incorporate a new weighting system adopted a month earlier by the Judicial Conference of the United States. As a result, the number of officially designated judicial emergencies dropped from 34 on April 14 to 28 the next day, a drop that had nothing to do with Senate action.