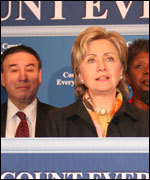 Ralph Neas and Hillary Clinton at the press conference announcing CEVA on March 7, 2007

“Today, Senator Hillary Clinton reintroduced the Count Every Vote Act in the Senate, and Congresswoman Stephanie Tubbs Jones reintroduced companion legislation in the House. With this comprehensive legislation, they are demonstrating great leadership in protecting every American’s right to vote, and taking a critical step in the growing momentum for federal election reform legislation.

“The need is urgent. We have a little more than 600 days until the critical national elections of 2008, when voters will decide the presidency, control of Congress and thousands of races up and down the ballot. Unless election reform legislation is enacted into law with necessary funding by the early fall of 2007, election administrators across the country may not have time to implement any of these reforms.

“The need is clear. Every Republican, Democrat and Independent deserves the right to vote without unnecessary barriers to the ballot box, and with the confidence that each vote will be counted. Unfortunately, our current election system fails to live up to that basic promise. That’s why this legislation is so important.

“We all remember the botched presidential election in 2000, with hanging chads, butterfly ballots and endless legal fights in Florida. We remember the long lines and problems at the polls that plagued voters in Ohio and elsewhere in 2004. We know about the massive ‘undervote’—those 18,000 ballots that disappeared into cyberspace—in Sarasota County, Florida, in the last election. It’s time for those of us who care about democracy to stop talking and to start doing, and supporting this legislation is an excellent way to take comprehensive action.

“This bill provides practical, secure and accessible solutions at the ballot box for all Americans, especially communities that have historically faced substantial barriers to the ballot box, including Americans with disabilities, racial minorities, and American citizens with limited English proficiency.

“This is thoughtful legislation that addresses many of the problems Election Protection volunteers encountered across the country during recent elections. It requires the use of accessible voter-verifiable paper trails, so that voters can be sure the votes they cast are accurate, and their votes are cast securely and counted with integrity. It restores voting rights to ex-felons who have paid their debt to society by completing their incarceration, probation and parole, and helps them re-engage as full participants in society. It addresses administrative problems and inequities that have caused some of the most disturbing problems we’ve seen—impossibly long lines at polling places, inequitable distribution of voting machines, and insufficient numbers of poll workers. It also makes other common-sense improvements such as implementing same-day voter registration, early voting and no-excuse absentee voting.

“People For the American Way was an original supporter of the Count Every Vote Act when it was first introduced in 2005, and we are proud to support it again. This legislation is a crucial milestone in the effort to reform our electoral process and restore the health of our democracy.”

PFAW and its affiliate, PFAW Foundation, are supporting this and other election reform legislation as part of their Democracy Campaign to promote election reform and fair elections on the local, state and federal levels. For more information, visit www.pfaw.org.