Despite the fact that Democrats hold a significant majority in the Senate, Republican senators are continuing to block President Obama’s Executive Branch nominees at a rate never before seen, according to a review of records by People For the American Way.

That’s an increase of more than 1,000% in the rate of forced cloture votes on nominations – 20 nominations on which cloture votes were forced in sixty years compared to 16 in just four and a half.  Republicans are on pace to force 28 cloture votes by the end of the Obama administration – more than under all previous presidents combined. 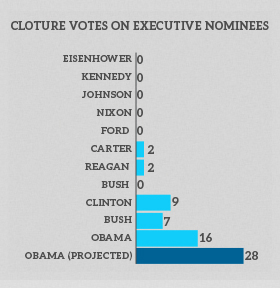 An examination of President George W. Bush’s term reveals that the Senate subjected only seven executive nominations to cloture votes in the entire eight years of his presidency—compared to 16 in just the first four and a half of the Obama administration.

Yet the full extent of the problem is even greater than what these numbers tell, because not all cloture petitions lead to formal cloture votes. So the total number of cloture petitions filed is important, and it also reveals a dramatic increase in the magnitude of obstruction.  Between 1949 and 2008, there were 32 executive nominations on which cloture was filed. There have been 25 filed so far under President Obama.

Indeed, during all eight years of George W. Bush’s presidency, there were only 15 executive branch nominees on which cloture petitions were filed compared to 25 in just the first four and a half years of the Obama administration.  At the current rate, President Obama can expect 44 of his executive nominees to face cloture petitions – more than under all previous presidents combined.

Moreover, the number of cloture votes and petitions may well go much higher than that—there are currently 15 executive branch nominations on the Senate’s calendar.  All of these nominees have been waiting over three months for a vote from the Senate. Three were first nominated in 2011, meaning they have been waiting more than a year and a half, one almost two years, for a confirmation vote.

Senate Republicans are currently blocking nominees to a number of critical federal offices, including Tom Perez, nominated to be Secretary of Labor; Gina McCarthy, nominated to head the Environmental Protection Agency; Richard Cordray, picked to be the first chief of the Consumer Financial Protection Bureau; and five members of the National Labor Relations Board. It is no coincidence that these nominees have all been picked to head government offices that Republicans view with suspicion. Unable to eliminate these offices through democratic means, Senate Republicans are trying to cripple them through procedural obstruction.

This sort of obstruction is literally unprecedented for either party and must be stopped. It prevents executive branch departments from serving critical public needs, and it represents, essentially, an effort to overturn the results of the last election.