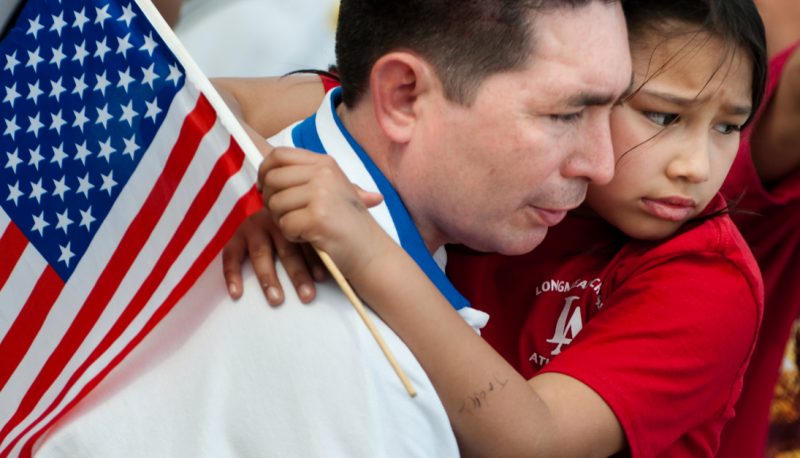 Center for American Progress published this fact sheet as a Remezcla op-ed.

Kavanaugh’s judicial record clearly suggests that he will use his position on the nation’s highest court to limit, and potentially reverse, many rights and protections that Latinxs currently enjoy in areas such as immigration, reproductive rights, health care, education, criminal justice, and voting rights.

Below, learn more about what is at stake should he be confirmed.

While serving on the D.C. Court of Appeals, Kavanaugh argued that undocumented immigrants did not have the right to unionize, despite long-standing precedents that established otherwise. By excluding them from labor protections, Kavanaugh could leave the 11 million undocumented U.S. immigrants vulnerable to wage theft and other forms of exploitations in the workplace. If reported, these abuses often lead to deportation.

Kavanaugh’s confirmation could also lead to weaker legal protections for Dreamers and asylum seekers. Multiple federal courts have curtailed Trump’s abuse of executive powers by ordering the reinstatement of Deferred Action for Childhood Arrivals (DACA) and the reunification of families separated under Trump’s zero tolerance policy. Kavanaugh, however, believes that U.S. presidents should have expansive power, including the ability to not enforce laws that they deem unconstitutional. If confirmed, Kavanaugh could not only uphold Trump’s extremist anti-immigrant laws, but also support the president’s choice to ignore immigration laws.

During his campaign trail, Trump vowed to appoint to the Supreme Court a judge who would overturn Roe v. Wade, the landmark case that established women’s constitutional right to abortion. Kavanaugh is the perfect fit to fulfill the president’s promise. Last year, he issued a strong dissent in a case that established a migrant woman’s right to obtain an abortion, and accused the majority of creating a “new right for unlawful immigrant minors in U.S. government detention to obtain immediate abortion on demand.”

The repeal of Roe would not only allow states to restrict or entirely revoke access to abortion; it could also have severe socioeconomic consequences for many Latina women and their families. HHS reported that teen motherhood, which is strongly associated to lower academic achievement and poverty, is particularly high among Latina women. Without abortion care, more Latinas may thus be forced to carry their pregnancy full term and subsequently suffer the socioeconomic hardships associated with early motherhood.

With Kavanaugh’s nomination, Trump hopes to accomplish in the courts what he failed to do through Congress or his executive power—repeal the Affordable Care Act (ACA). As a judge on the D.C. Court of Appeals, Kavanaugh dissented from a decision to uphold the constitutionality of the ACA and argued that the president could choose not to enforce the ACA’s individual mandate if he “[concluded] that the enforcement would be unconstitutional.”

Millions of Latinxs will lose health care if the ACA is undermined or repealed. The Latinxs community experienced the highest decline in uninsured rates of any U.S. ethnic group after the implementation of the ACA, falling from 43.2% in 2010 to 24.8% in 2016. In 2016, Latinxs constituted approximately one-third of the increase in adults with insurance.

Affirmative action—a policy designed to help Latinx and other minority students access our country’s most elite colleges and universities—could also be at stake. Kavanaugh’s past writings for the Center for Equal Opportunity—an organization that opposes affirmative action in college admissions—signals that he will likely be the fifth vote on the Supreme Court to strike it down.

The repeal of affirmative action would have dire consequences on Latinx students. For example, the enrollment of Latinxs at the University of California, Berkeley, fell by almost half after affirmative action policies were banned. These numbers are extremely alarming as people with a bachelor’s degree make $23,972 more on average than those with only a high school diploma.

Kavanaugh’s views suggest that he will rule in favor of a criminal justice system that continues to disproportionately punish Latinxs and other minorities. Last year, Kavanaugh delivered a speech praising the efforts of former Chief Justice William Rehnquist to defend the death penalty, limit the constitutional protections for criminal defendants, and curtail the “exclusionary rule”—which prohibits illegally obtained evidence from entering a trial. Moreover, while serving on the D.C. Court of Appeals, Kavanaugh issued a dissent against a man’s constitutional right against unreasonable searches and seizures.

A report by the New York Civil Liberties Union found that last year police officers stopped Latinxs at a rate more than three times higher than that of Whites. Other studies have found that Latinxs are more likely to receive the death penalty or be wrongfully convicted. Kavanaugh’s rulings in the Supreme Court could skew the justice system even more against Latinxs by leaving them unprotected against unconstitutional practices in the criminal legal system.

Brett Kavanaugh is a direct threat to the voting rights of Latinxs and other minorities. As a judge, Kavanaugh ruled in favor of Southern Carolina voter identification law that required voters to possess identification to cast a ballot. This measure was eventually stopped by the Department of Justice as it disproportionately impacted minority voters.

Latinx voters already face a wide range of obstacles during the electoral process, including work restrictions, language barriers, voter intimidation, and inaccessibility to polls. Studies show that voter ID laws affect Latinxs the most of all minority groups. With Kavanaugh on the bench, a conservative Supreme Court majority could further disfranchise Latinxs by upholding the constitutionality of similar laws and others such as Ohio’s voter purge law.

Make no mistake: Judge Kavanaugh’s confirmation is a major threat to important Latinx issues. For suggestions on things you can do to fight his appointment, check out The Cut’s round up here.