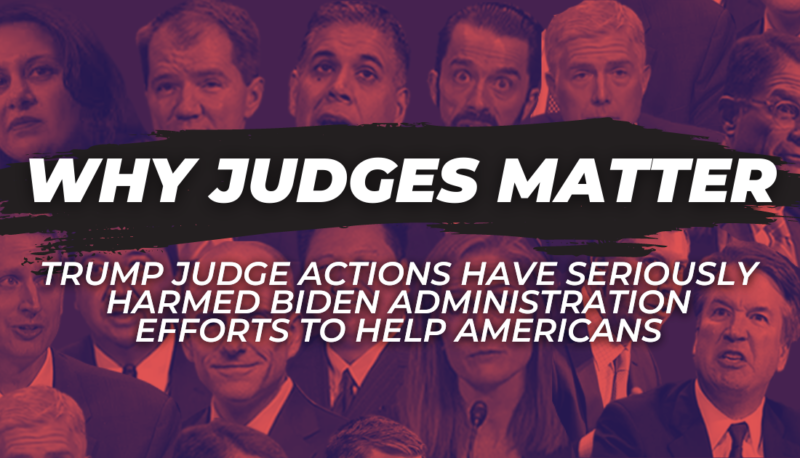 The Biden Administration, with the help of Democrats in Congress, has accomplished a lot in its first year. Highlights have included helping the country combat and recover from the COVID-19 pandemic, undoing much of the damage done by the Trump Administration in a variety of areas and making lifetime appointments of a historic number of diverse and highly qualified judges to the federal bench. A key barrier that has significantly harmed Biden Administration efforts, however, has been decisions by lifetime Trump-appointed judges that have blocked a number of these actions.

As documented in People For the American Way’s Our Courts, Our Fight blog series, Trump judges at all levels have issued multiple decisions in 15 cases that have improperly delayed or stopped important and legal Biden initiatives. As explained below, moreover, the methods used by Trump judges – including nationwide injunctions by Trump judges in a single district, unsigned “shadow docket” rulings with little or no explanation, and judicial second-guessing of expert health and other agency determinations — threaten to do even more damage in the future.

Some of the serious harm to the American people by Trump judges may be reversible. Tragically, some may not, particularly the loss of life due to damage to the COVID-19 effort. These decisions reinforce the importance of the Senate continuing to promptly confirm fair-minded judges who can counter harmful votes by Trump judges.

The Biden Administration’s top priority since taking office continues to be the COVID-19 pandemic, which persists in harming our health, economy, and our daily lives. For all the Administration has done to promote vaccinations and take other important actions, however, Trump judges have stopped or caused harmful delays in several areas. Specifically:

During the Trump Administration, the Centers for Disease Control (CDC) recognized the serious health danger caused by eviction of lower-income residents because of problems, many caused by the economic effects of COVID-19 itself, in paying rent. Studies documented the risk to health and the literal loss of life when people are evicted and must seek temporary shelter with family and friends, and the courts, including Trump judges, upheld the eviction moratorium ordered by the CDC.

Things changed dramatically once Joe Biden became president. Although the CDC continued to issue limitations on eviction, a number of Trump district judges, including one who had upheld such a moratorium a few months earlier under Trump, ruled that the CDC eviction restrictions were illegal and struck them down. Several appellate judges nominated by Trump upheld or refused to stay such orders. This was despite the fact that the DC Circuit court of appeals ruled that the CDC’s temporary moratorium enacted in early 2021, as the Delta variant spiked throughout the country, was legal. In an unsigned “shadow docket” opinion made possible by the three Trump justices, however, the Supreme Court effectively struck down the eviction moratorium in August, 2021. This was despite the warning in the dissent by the Court’s three moderate justices that the majority’s action threatened the “health of millions,” and that some “10,000 deaths” could well result from the majority’s “second-guessing” the CDC’s expert judgment. It is too soon to determine precisely the effects of the Court’s action, but evictions have increased since the Court’s ruling and such dire predictions are all too likely to become true as the Omicron variant ravages our country.

Although millions of Americans have heeded the advice of the Administration, medical experts, and many others to get vaccinated against COVID-19, millions more have not, threatening their health and the health of people around them. After consultation with experts and others, the Administration announced in the fall a Path out of the Pandemic plan, which relied on recognized federal authority to require COVID-19 vaccinations by companies employing health care workers serving vulnerable Medicare and Medicaid patients, large corporations with more than 100 employees, and federal contractors, as well as requiring vaccination of federal workers and military personnel. A number of Trump judges have blocked some of these important requirements, however, with a key Supreme Court hearing on the subject set for January 7. Specifically:

We do not know how the Trump justices and other far-right members of the Court will rule on these crucial vaccine requirements after the January 7 arguments, although there is significant reason for concern. In any case, the delays already caused by Trump lower court judges, as the Justice Department has explained, “will likely cost many lives per day,” as well as “large numbers of hospitalizations” and “other serious health effects.”

Causing other harm to anti-COVID efforts

Shortly after passage of the American Rescue Plan Act of 2021, Trump judge Amul Thapar issued a 2-1 decision granting a preliminary injunction against an important part of the law that prioritized for 21 days the processing of relief requests by small restaurants harmed by the pandemic with female, minority, or socially disadvantaged owners. The ruling could well lead to other invalidation of what the dissent called “narrowly tailored” efforts to provide a “monetary lifeline aimed at ameliorating short-term economic devastation” caused by COVID or other disasters.

In an early effort to deal with climate change and pollution problems, the Biden Administration ordered a temporary halt to new leases for oil and gas drilling on federal land and offshore as it conducts a comprehensive review of the impact of such leasing. In response to a challenge by Republican states, a Trump district judge ordered a nationwide stop to the effort, a preliminary injunction that one expert called “deeply dangerous.” The Administration has in fact continued such leases as required, and the case is currently on appeal.

In three cases by Trump district judges in Texas, later approved by Trump appellate judges including on the Supreme Court, reforms by the Biden Administration to damaging Trump immigration practices were stopped. They also 0rdered reinstatement of Trump policies, with harmful effects that continue today. Specifically:

The record is clear. Despite the tremendous progress made by the Biden Administration in 2021, the rulings of Trump judges at all levels have severely impeded that progress, risking Americans’ health and lives from the COVID-19 pandemic, frustrating efforts to improve the environment and combat climate change, and forcing the Administration to continue several harsh Trump immigration policies. In doing so, these Trump judges have used questionable legal tactics – including injunctions by judges in a single judicial district that apply throughout the country, unsigned “shadow docket” orders with little or no explanation, and rulings that improperly second-guess the expert judgment of health and other agencies – that are all too likely to be used in 2022 and beyond to improperly interfere with Biden Administration and Congressional actions to help Americans.

People For will continue to track and criticize such harmful decisions. To do more, it is absolutely crucial that all of us encourage the Senate to continue to confirm fair-minded judges who can help counteract these harmful rulings, and help ensure that Senators will continue to be in place who will do so.