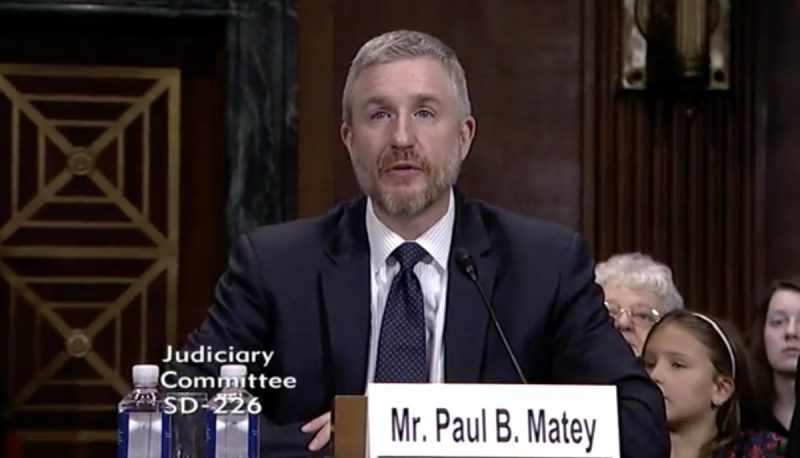 On April 12, President Trump nominated Paul Matey to a seat on the U.S. Court of Appeals for the Third Circuit over the objection of home state New Jersey senators Bob Menendez and Cory Booker. Despite their objection, the Senate Judiciary Committee held Matey’s hearing on November 13 and has scheduled his committee vote for January 29. People For the American Way wrote to committee members to express our opposition to the Matey nomination. You can download our letter here.

On behalf of our hundreds of thousands of members and activists across the United States, People For the American Way opposes the confirmation of Paul Matey of New Jersey to be a federal judge on the Third Circuit Court of Appeals. Matey served as a senior aide to Gov. Chris Christie from 2010-2015, offered Christie legal advice during a scandal-filled period that included Bridgegate, the use of Hurricane Sandy disaster relief funds for what was essentially a reelection commercial, and rewarding a major political donor with a $150 million no-bid contract.

With both home state senators Bob Menendez and Cory Booker opposed, Matey’s nomination exemplifies the breakdown in norms that once allowed the parties to work together while identifying highly qualified consensus nominees for the federal bench.

During the first two years of the Trump presidency, the Judiciary Committee held hearings for an unprecedented number of circuit court nominees opposed by one or both home state senators. When President Trump nominated Paul Matey, he did so without meaningfully consulting with Menendez and Booker. In addition, Chairman Grassley held a hearing over their objections, even though Booker was a colleague on the committee.

Home state senators often have knowledge of a nominee that might not be known to the White House, and that is certainly the case here. Matey worked as senior vice president and general counsel at University Hospital in Newark. During his tenure, the hospital had several major problems and scandals, including a safety grade that plummeted down to an F. As mayor of Newark at the time, Booker was deeply familiar with the situation, yet he was not meaningfully consulted by the White House. Grassley scheduled Matey’s hearing without first asking Booker to explain his opposition or giving his colleague a chance to meet with the nominee.

As the New Jersey senators wrote to Grassley on November 9, 2018,i after the hearing was scheduled:

At Matey’s confirmation hearing,ii Booker urged Grassley to let him meet with the nominee to discuss his concerns in private before the public questioning:

Menendez, I don’t want to speak for my colleague, but I imagine that he would want that courtesy that any senator that is a member of your committee would want. We’ve never denied a meeting with this person.

As a duly elected senator from New Jersey, for a nominee that has served in my city that I was a mayor of is a matter of grace. I’m asking you to extend to me the opportunity before we have this hearing to have a more substantive conversation with this nominee. Would you please grant my — I will meet with him now in my office.

But the 116th Congress brings new leadership to the Judiciary Committee, and a chance to restore the norms shattered during these past two years. Chairman Lindsey Graham should not allow the committee to process Matey’s renomination without the consent of both home state senators.