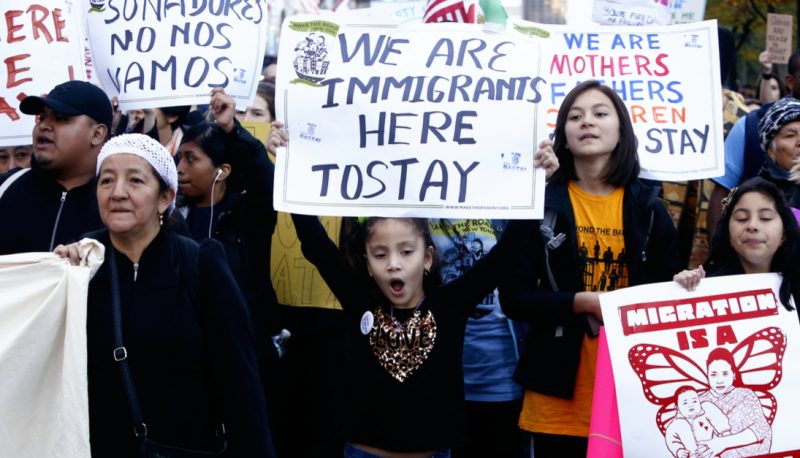 Media reports continue to suggest that President Trump will end the critically important Deferred Action for Childhood Arrivals (DACA) program, which has allowed hundreds of thousands of young immigrants to pursue careers and education without fear of deportation. This comes on the heels of Trump pardoning former Arizona Sheriff Joe Arpaio. Like the Arpaio pardon, ending DACA would send a transparently racist, anti-immigrant message to Trump’s extreme political allies that they have a supporter in the White House.

People For the American Way is urging Trump, who once said he’d “deal with DACA with heart,” to stop pandering to the far Right and start working with Congress on creating a full path to citizenship for the Dreamers whose lives are at stake.

PFAW leaders are also among the nearly 2,000 elected officials and civic and faith leaders nationwide who are standing with Dreamers through a large-scale joint statement:

We, the undersigned governors, statewide constitutional officers, mayors, state legislators, local elected officials, law enforcement professionals, and faith and civic leaders are united in declaring that we are with Dreamers and DACA recipients. We recognize their enormous role in our communities and families and their contributions to our schools, workplaces, and shared prosperity as a nation.

Reverend Leslie Watson Malachi of African American Ministers In Action and Christin “Cici” Battle of Young People For (YP4) Action joined PFAW’s Young Elected Officials Action Network in signing the statement and saying to Dreamers: we see you, we value you, and we are ready to defend you.

As the leaders of communities across the country—individuals and institutions that have seen these young people grow up in our communities—we recognize how they have enriched and strengthened our cities, states, schools, businesses, congregations, and families. We believe it is a moral imperative that the administration and the country know we are with them. We also join together to send our assurances to Dreamers: we see you, we value you, and we are ready to defend you.

Are your local leaders standing with Dreamers? Let them know that they can sign on to the statement now.

You can learn more about the #WithDreamers movement in this USA Today report.