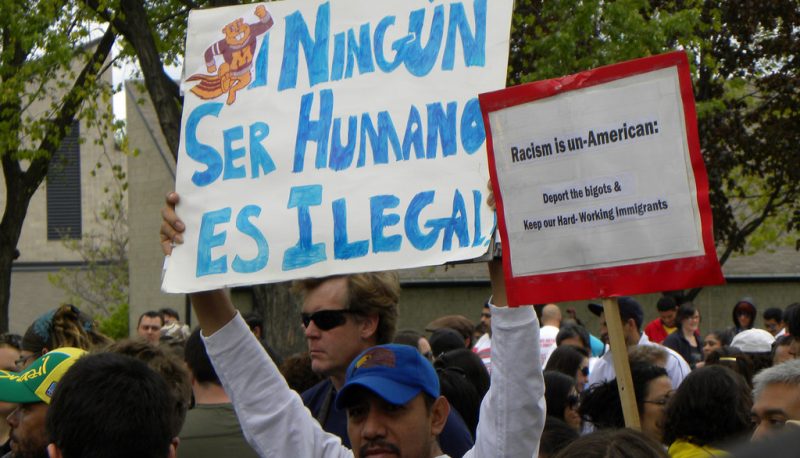 On August 12, DHS announced a new “public charge” rule designed to dramatically reduce the number of immigrants who can access a green card or obtain permanent status. It is set to go into effect in early October and could affect thousands of immigrants who have or are likely to rely on public assistance benefits. Although the Trump administration is half-heartedly attempting to frame this as a minor change meant to encourage “self-sufficiency,” the reality is that these changes, like others before them, are motivated by Trump’s anti-immigrant racism as yet another way to give government officials wide discretion to discriminate.

The public charge rule was included in the Immigration Act of 1882, the same year Congress passed the Chinese Exclusion Act. The original policy required denying entry for “any convict, lunatic, idiot, or any person unable to take care of himself or herself without becoming a public charge” without specifically defining how officers were to approach this evaluation. These policies indicate a broader trend to weaponize immigration policy to further xenophobic agendas in the United States.

Almost immediately after its introduction, officers began citing the public charge rule to deny the entry of Irish and Chinese migrants, claiming that their social standing could make them a burden on taxpayers and questioning whether they were worthy of pursuing the American dream. Similar sentiments were expressed during the Great Depression when Mexican migrants had a higher rate of visa denials amid the economic volatility in the U.S. at the time. It was also used in World War II to deny Jewish refugees’ entry into the U.S. who had lost their wealth to the Nazi regime, and until very recently officers continually cited the rule when denying legal status to LGBTQ+ immigrants.

In 1999, the Clinton administration issued more specific guidance to define who could be denied entry based on the public charge rule. The new policy stated that a person could be denied if they were likely to become “primarily dependent on the government for subsistence, as demonstrated by either the receipt of public cash assistance for income maintenance, or institutionalization for long-term care at government expense.” Missing from this new definition was the right to issue a denial based on non-cash benefits like Medicaid or food stamps, which many immigrant families rely on for basic survival and which until recently, had not been held against them in their pursuit for permanent residency.

Trump’s new rule would expand the definition of who can be categorized as a public charge to include those using “one or more public benefits” in the past or being “likely at any time” to receive such benefits in the future. A public charge denial would be triggered if someone has received one or more public benefits for more than 12 months in aggregate within any 36-month period, with each benefit received each month being counted as an additional month. Although Trump can’t on his own bar immigrants from using public subsidies provided by federal and state agencies, he is effectively using these programs as a weapon against poor immigrants who rely on them to survive.

Even more worrisome is that the new rule directs immigration officers to project the likelihood that immigrants might someday become a public charge based on arbitrary levels of income, family status, assets, resources, health, employment, education, and English-language proficiency. These factors give immigration officers broad discretion when evaluating an immigrant’s request for a green card, and leave much room for bias.

The truth is that immigrants are no more likely than native-born Americans to access public subsidies, despite the financial burdens of the immigration process including USCIS fees, attorney fees, and travel. There is also no evidence that immigrants perform any less labor or have in any way damaged the American economy as a whole.

Let’s be clear: Trump’s policy is just the latest example in a slew of hate-filled policies designed to stoke fear and bar Black and brown immigrants from entry into the U.S. Thirteen states, led by Washington Attorney General Robert Ferguson, have already filed a lawsuit challenging this new rule on the basis that Trump acted without congressional approval to redefine a term that has been understood and litigated for decades in immigration law. We must use every tool at our disposal to fight this – and every – attack on the immigrant community.