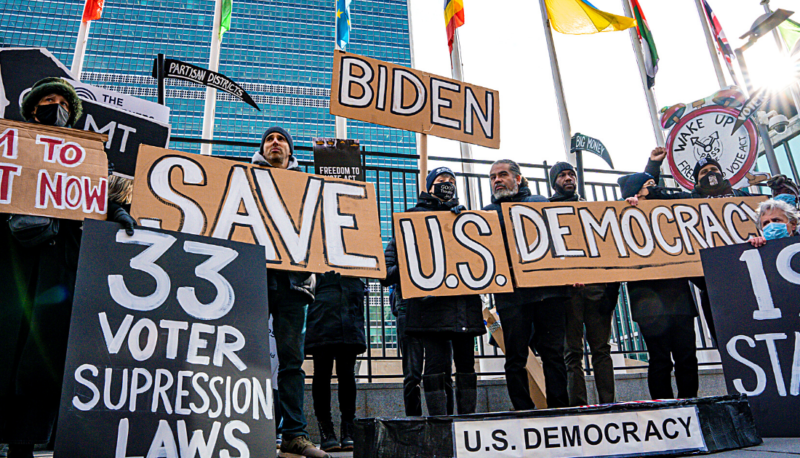 This is Our Moment: More Than 200 Arrested in Powerful Voting Rights Protest at White House

On Thursday, December 9th, President Joe Biden kicked off his virtual Summit for Democracy. Gathering officials from over 100 countries, the summit was meant to bring democratic countries together, sharing resources and shoring up governments against growing authoritarianism around the world. Across the front page of the State Department’s website for the summit was a quote from President Biden: “Democracy doesn’t happen by accident. We have to defend it, fight for it, strengthen it, renew it.”

Yet for activists in New York City, organized by the Worker’s Circle, Black Voters Matter, and Fair Elections For NYC, with organizational and on the ground support from People For the American Way, Biden’s hosting of an international democracy summit while multiple voting rights bills languish in the Senate is a point of contention. Under the banner of “Democracy, Hypocrisy,” dozens of activists from New York City gathered near the UN to protest Congress and Biden’s inaction on voting rights bills, namely the Freedom to Vote Act, the John Lewis Voting Rights Advancement Act, and the DC Statehood Act. NYC’s action was among nine actions across the country that took place Thursday to push key senators and the president towards their passage before the end of the year.

Since President Biden’s election, 33 voter suppression laws have been passed in 19 states across the country, Republican-controlled state legislatures have drawn heavily partisan gerrymandered redistricting maps, and Republican elected officials continue to spread disinformation regarding the 2020 election. Despite all this, President Biden’s public comments about the passage of the Freedom to Vote Act and John Lewis Voting Rights Advancement Act have been lukewarm at best.

Gathered behind a mock coffin, holding scythes with “Big Money,” “Voter Suppression,” “Partisan Districts,” and “Election Subversion” written on them and placards of the 19 states with voter suppression laws, activists held a funeral procession for U.S. democracy as they walked towards the US Mission to the UN, where they held a press conference. Standing with the international flags of the UN behind them, Cliff Albright of Black Voters Matter, Ann Toback of the Worker’s Circle, Juwanza Williams of Vocal NY, Rev. Mark Thompson, and NYC’s Public Advocate Jumaane Williams were among the speakers. They all spoke of the urgency of the moment and the contrast between Biden’s overtures on the international stage and his failure so far to use the power of the presidency to secure progress on key domestic democracy legislation.

“Federal inaction on voting rights could be the nail in the coffin for U.S. Democracy, and an insult to the Black and brown voters being targeted by vote suppression,” said Jawanza Williams of VOCAL-NY. “We desperately need President Biden and Senator Schumer to use every tool at their disposal to pass the Freedom to Vote Act and John Lewis bill by the end of this year.”

Cliff Albright, co-founder and executive director of Black Voters Matter, said: “Voters stepped up in unprecedented numbers in 2020 to elect leaders that would protect our rights. Almost a year later, we’re still waiting for action on voting rights, but Pres. Biden wants to talk about global democracy? You can’t sell something globally that you can’t even protect at home.”