Activists Rally in Phoenix to Call on Sen. McSally to Demand a Fair Impeachment Trial - People For the American Way
Skip to main content 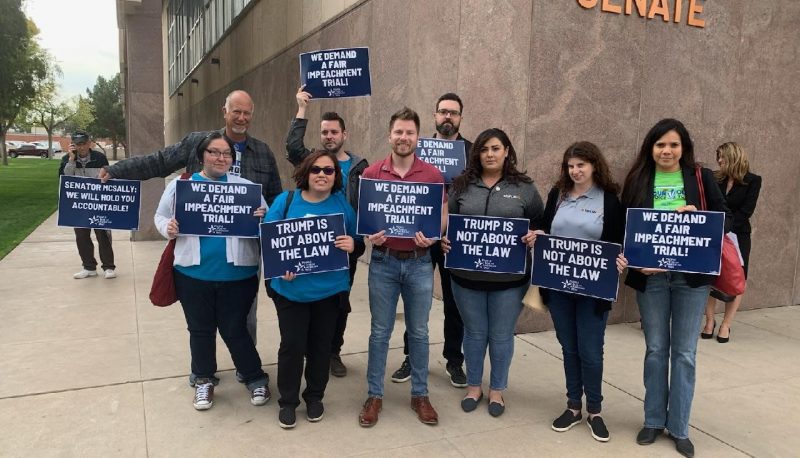 PFAW members in Arizona rally outside of the Arizona Capitol to demand that Sen. Martha McSally support calling witnesses and including documents in Trump's Senate impeachment trial.

On January 29, People For the American Way members, local activists, and Arizona state legislators attended a rally outside of the Arizona Capitol to demand that Republican Senator Martha McSally support calling witnesses and including documents in Trump’s Senate impeachment trial. Activists held signs calling for a fair impeachment trial and calling on the senator to do her job to hold Trump accountable for his abuse of power.

Given the new information from the memoir of John Bolton, former national security advisor to the president, which ties $391 million in aid to the Ukraine to the president’s request to investigate the Bidens, we all deserve to hear testimony from anyone with a first-hand account of the quid-pro-quo.

Any senator who remains opposed to witnesses and documents will be complicit in a cover-up. And with a vote pending in the next few days, we will not back down in our call for every senator to ensure that witnesses are called to testify prior to a vote to acquit or remove the president from office.