An Unsettling Deception About “Settled Law” 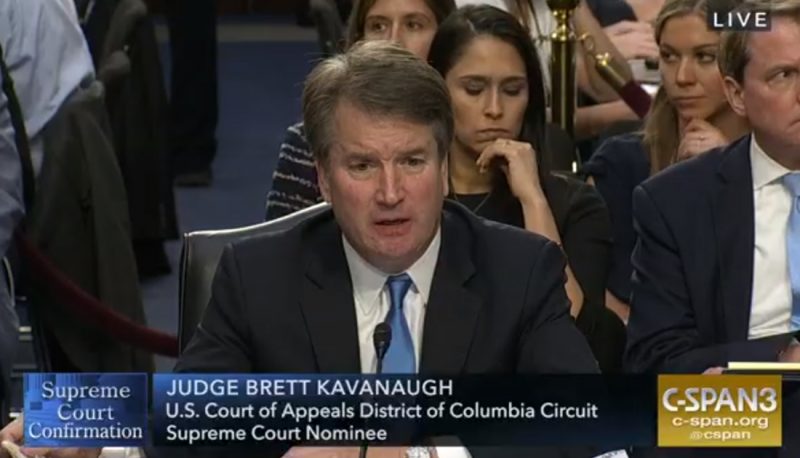 Brett Kavanaugh has sought to hide his plans to be the fifth vote to eviscerate abortion rights by repeating the truism that Roe v. Wade and Casey v. Planned Parenthood are “settled law.”  Republicans hope Sens. Susan Collins and Lisa Murkowski will fall for this, or that it will at least give them cover to keep calling themselves pro-choice even as they knowingly cast the votes that would lead to the end of the constitutional right to abortion.

But the GOP strategy fell apart on day three of the confirmation hearings with the publication of a “smoking gun” document that Republicans had been suppressing by needlessly designating it “committee confidential.”

It comes in a March 2003 email, when Kavanaugh was working in the Bush-43 White House. One of his colleagues had drafted an op-ed in support of controversial circuit court nominee Priscilla Owen, designed to assuage concerns that she would threaten women’s right to abortion. The draft, being ghost-written by anti-choice partisans in the voice of a pro-choice woman, said in part:

Some Democrats claim that confirming Owen would somehow threaten a woman’s right to choose an abortion. As a fervently pro-choice woman who has studied the law and Owen’s nine-year record on the Texas Supreme Court, I find the claim patently absurd.

First of all, it is widely understood accepted by legal scholars across the board that Roe v. Wade and its progeny are the settled law of the land. [emphasis added]

Reviewing the draft for approval, Kavanaugh took issue with that description of Roe:

I am not sure that all legal scholars refer to Roe as the settled law of the land at the Supreme Court level since [the] Court can always overrule its precedent, and three current Justices on the Court would do so.

So in 2003, with three conservative justices chomping at the bit to overrule Roe and Casey, Kavanaugh did not think Roe was settled law at all.

Fast forward 15 years, and there are now four rather than three hard-right conservative justices. One might think Kavanaugh would be even less comfortable calling it settled law. Yet that is the phrase he’s using to trick Americans into thinking he didn’t pass President Trump’s litmus anti-choice test.

There was no legitimate reason to designate this document “committee confidential” and thereby prevent Democratic senators from talking about it or asking Kavanaugh about it in open hearing.

This email shows that Brett Kavanaugh’s well-rehearsed lines of reassurance cannot be believed. It also exposes the deception and corruption of the entire confirmation process for this nominee.