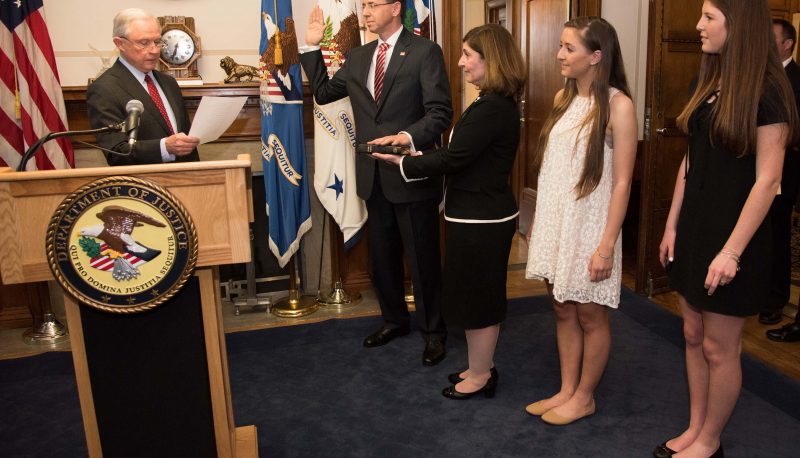 Photo by Matthew T. Nichols for the Department of Justice

Members of Congress need to demand answers to some tough questions

Tuesday started with an important question: Where Is The ‘Justice’ In Sessions’ DOJ?

Then we watched closely as Deputy Attorney General Rod Rosenstein appeared before the House and Senate appropriations committees to answer for DOJ’s misplaced priorities when it comes to civil rights.

On the House side, several members pressed Rosenstein for a commitment to the rights and liberties of all Americans. Representative José E. Serrano framed DOJ as a “beacon of hope” and expressed his concern that the proposed budget means DOJ will do less on civil rights. Representatives Derek Kilmer and Matt Cartwright challenged Rosenstein to commit to enforcing the Voting Rights Act and rooting out voter suppression, in contrast to Trump promoting the voter fraud myth through his sham commission. Representative Grace Meng raised the importance of robust data collection for civil rights, particularly regarding crimes targeting Asian Americans and Pacific Islanders.

Over in the Senate, Rosenstein was peppered with questions about the special counsel investigation, which implicates the wide range of issues under DOJ jurisdiction. Senator Chris Van Hollen specifically touched on civil rights when he asked Rosenstein about the Baltimore consent decree that the city’s mayor, councilmembers, police commissioner, and residents all supported to reform the city’s police department. Senator Dianne Feinstein challenged the costly litigation that will be used to build and defend Trump’s border wall, which has been rejected by most Americans.

Budgets set policy priorities, and Rosenstein’s budget testimony made clear that we still have a lot to learn about whether DOJ intends to spend its precious resources to further its core mission or to keep turning back the clock on civil rights.

Click to view the full House and Senate hearings.