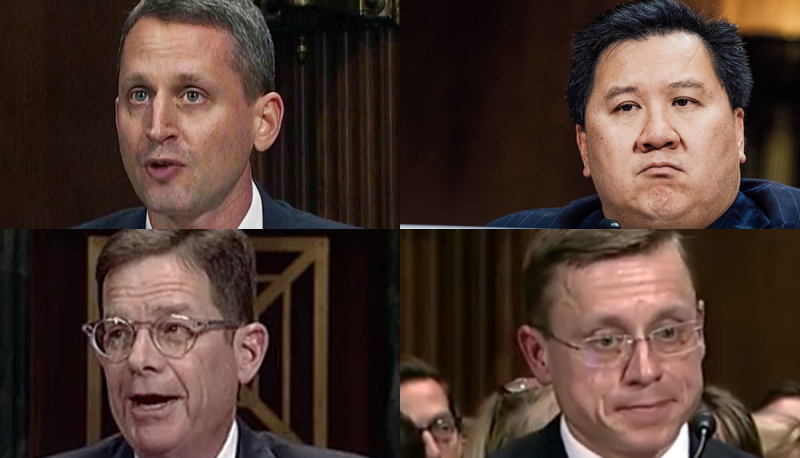 Four Trump judges on the Fifth Circuit, including James Ho, Kyle Duncan, Kurt Engelhardt and Andrew Oldham, joined a dissent from a denial of rehearing by right-wing judge Edith Jones that would have reversed a panel decision that struck down under the First Amendment a Louisiana law that criminalized making threats of even lawful action against public officers. If adopted, the dissent would have made it much harder to challenge criminal laws that improperly prohibit actions protected by the First Amendment.

Travis Seals was arrested by police in connection with a dispute with a neighbor. He contended that he was improperly pepper-sprayed, objected to the arrest, and threatened “to make lawful complaints” about the officers’ conduct. Among other things, he was charged with violating a Louisiana law that criminalizes “the use of violence, force, or threats” on any public officer. The local district attorney’s office later dismissed the charges, but maintained that it could prosecute under the state law until four years after the arrest, in December 2019.

In 2016, Seals and another person arrested with him brought a civil suit against the police and others, seeking damages and an injunction against the law. They claimed that the statute was overbroad under the First Amendment because it made it illegal even to make “threats” to take lawful action like pursuing complaints against the police. Although the damages claim is still pending, the district court agreed that the law was overbroad and issued an injunction against enforcement of the prohibition against “threats.” The state appealed, and a three-judge panel of the Fifth Circuit affirmed in Seals v. McBee.

On October 31, 2018, however, eight Fifth Circuit judges, including four Trump appointees, strongly dissented from a decision by the full court not to rehear the decision, and made clear that they thought that the district court and the three-judge panel were wrong. (They came within one vote of prevailing, since eight judges voted against rehearing and a majority is needed to rehear a case). Six of the eight joined a dissent that argued that Seals did not have standing to challenge the law at all, since the charges against him were dismissed. If their view had prevailed, not only would the specific state law have been upheld, but it would also be much harder to challenge overbroad laws that threaten First Amendment rights. As explained in the original panel decision (which included Trump nominee Don Willett), where the government will not absolutely disavow prosecution and can still prosecute under a challenged law, the Supreme Court has made clear that a person “should not be required to await and undergo a criminal prosecution as the sole means of seeking relief.”