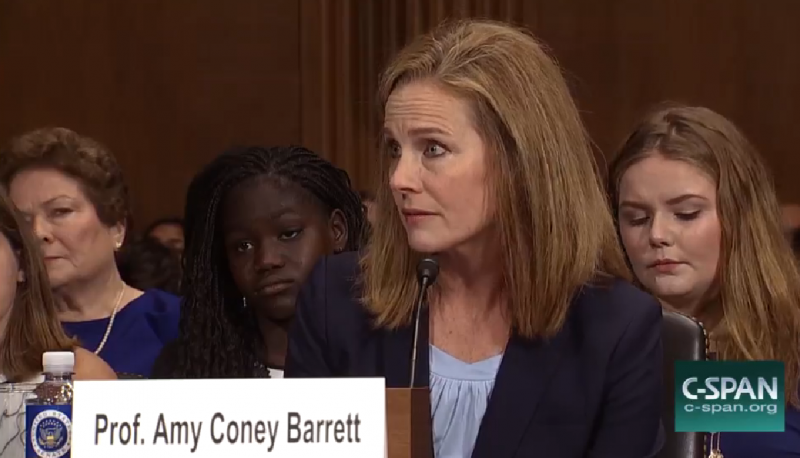 Trump Seventh Circuit Judge Amy Coney Barrett recently wrote an opinion in Alvarenga-Flores v. Sessions that affirmed the Bureau of Immigration Appeals’ (BIA) rejection of an El Salvadoran’s request for protection from deportation under the Convention Against Torture (CAT) that was never even considered on the merits. This was because the immigration judge who considered the case found the immigrant’s story not credible because of what the dissent described as “trivial” inconsistencies in his description over a 3 ½ year period of what had happened to him. The dissenting judge pointed out that previous Seventh Circuit case law requires that despite such minor inconsistencies, requests for protection under CAT and to withhold involuntary removal should be considered on the merits. But Judge Barrett and Bush appointee Diane Sykes disagreed and affirmed the BIA decision to deport the immigrant back to El Salvador.

Gerson Elsio Alvarenga-Flores was an El Salvadoran student living with his parents. When he came to the United States, he sought protection because of serious fear of torture and mistreatment by gang members and the unwillingness of his government to provide any protection. As he explained, when he was in a cab with friends on one occasion, a gang of armed men approached, demanded that the passengers exit, shot into the cab when they did not, and pursued Alvarenga when he ran from the cab, although they did not catch him. He went to the police but they said they “could not help.”  Phone calls then began to him at his parents’ home  in which gang members “threatened to kill” him. Several days later, gang members boarded a public bus that Alvarenga was on and chased him, both on and off the bus, although he escaped. Fearing more persecution by the gang, which was part of a widespread gang problem in El Salvador, Alvarenga sought protection in the United States.

As a result of decisions by immigration authorities and Judges Barrett and Sykes, however, he also received no relief in the U.S. His claim for asylum (which is based on a different law than the Convention Against Torture) was rejected on statute of limitations grounds, on which the appeals court unanimously agreed. But the immigration judge refused even to consider the merits of his claim for CAT protection and his claim to withhold involuntary removal to El Salvador because the  judge found “inconsistencies” in Alvarenga’s  description of what happened to him, specifically concerning precisely where in the cab he and his friends were seated and which end of the bus the gang members entered. Barrett and Sykes found there was “substantial evidence” to support this ruling. But dissenting judge Thomas Durkin explained that the inconsistencies were “minor” and “not material,” that they were easily explained by the fact that Alvarenga simply provided “greater detail” when asked to describe more specifically what happened at one point, and that the majority was disregarding binding Seventh Circuit precedent that held that “reasonable explanations” for such “discrepancies must be considered” by immigration authorities. Under controlling precedent, Durkin explained, the decision should have been remanded for reconsideration, including reconsideration of corroborating evidence from Alvarenga’s parents. But Barrett and Sykes refused.