Confirming Judicial Nominee Joseph Bianco Would Represent a Dangerous Shift in Our Legal, Political, and Cultural Norms - People For the American Way
Skip to main content 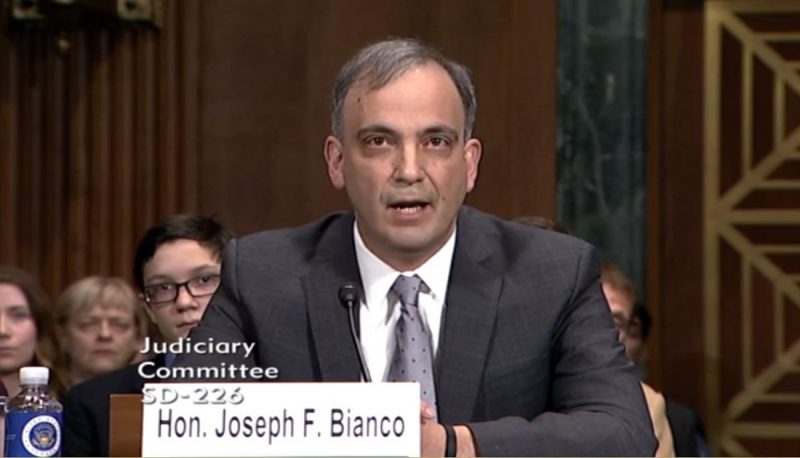 On November 13, President Trump nominated Joseph Bianco of New York to be a judge on the Second Circuit Court of Appeals over the objection of home state Democratic senators Chuck Schumer and Kirsten Gillibrand. The Senate Judiciary Committee held Bianco’s hearing on February 13 and reported him to the full Senate on March 7. Floor votes are expected beginning May 6. People For the American Way wrote to the Senate to express our opposition to the Bianco nomination. You can download our letter here.

On behalf of our 1.5 million supporters nationwide, People For the American Way opposes the nomination of Joseph Bianco of New York to be a judge on the Second Circuit Court of Appeals. Because he does not have the support of his home state senators, confirming him would worsen the Senate dysfunction that is harming both the upper chamber and the nation’s judicial system.

The nominations of Bianco and fellow New Yorker Michael Park to the Second Circuit exemplify the breakdown in norms that—before the Trump/McConnell era—once allowed the parties to work together while identifying highly qualified consensus nominees for the federal bench. President Trump made a choice to bypass Sens. Schumer and Gillibrand. Judiciary Committee chairman Lindsey Graham then made a choice to advance the nominations over Schumer and Gillibrand’s objections.

Now all 100 senators have to make a choice: Will they respect the courts, the Senate, their fellow senators, and their own authority by opposing a nominee who is not supported by his home state senators? Or will they continue down the road of staffing the federal judiciary under the banner of “might makes right?”

It is also deeply disturbing that Bianco has joined the many other judicial nominees of this White House in refusing to acknowledge that Brown v. Board of Education was rightly decided.i This represents a breathtaking and ominous step back from the long-established pre-Trumpian norm. Indeed, every current Supreme Court justice supported Brown at their confirmation hearings.ii A vote to confirm a nominee under these circumstances would put the Senate’s stamp of approval on a dangerous shift in our legal, political, and cultural norms.

We urge you to vote against confirming Joseph Bianco to the Second Circuit.