Courts Without Judges, Per the GOP Plan - People For the American Way
Skip to main content

Courts Without Judges, Per the GOP Plan

The Sunday New York Times has a powerful editorial about the intentional damage being done to our nation by Senate Republicans' sabotage of the judiciary branch of the United States government.

The number of vacancies on the nation's federal courts has reached an astonishingly high level, creating a serious shortage of judges and undermining the ability of the nation's court system to bestow justice. …

By far the most important cause of this unfortunate state of affairs is the determination of Senate Republicans, for reasons of politics, ideology and spite, to confirm as few of President Obama's judicial choices as possible. 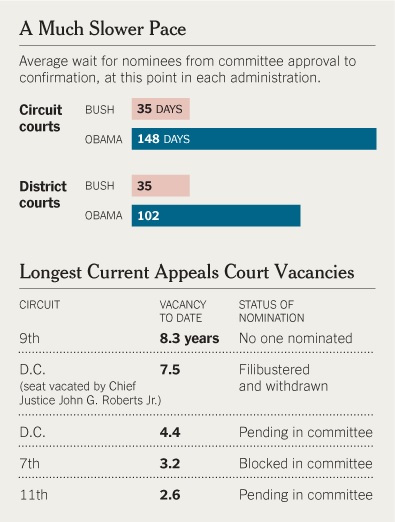 We saw a high-profile example of groundless obstruction last month with the Republicans' second filibuster of Caitlin Halligan to the DC Circuit, the nation's second most important court. PFAW has published a report analyzing why this court is so important and why the GOP is set on preventing the president from restoring balance to what has become a notoriously arch-conservative court. Of the 11 active judgeships on this influential court, four remain vacant. This is despite the fact that President Obama nominated Halligan in 2010. He also nominated Sri Srinivasan, yet due to Republican obstruction at the committee level, hearings for Srinivasan have been delayed until this week, a full ten months after his nomination.

The Halligan filibuster got some Democratic senators talking about a bolder strategy, including revisiting filibuster reform and making it harder for senators to torpedo or delay nominations to judicial vacancies in their home states. Another proposal is to have Mr. Obama make simultaneous nominations to fill the four vacancies on the District of Columbia Circuit, which would force Republicans to come up with plausible reasons to oppose each of them. In the face of political paralysis, these ideas are worth embracing. (emphasis added)

President Obama should nominate strong candidates with diverse backgrounds and impeccable qualifications for each of the vacancies, to restore the DC Circuit to the number of judges that Congress has determined it needs to operate effectively. We know the Republicans will manufacture reasons to obstruct them, but allowing even one vacancy to go without a nominee hands a partisan victory to a far-right political party that is willing to sacrifice Americans' access to justice to their own narrow political agenda.