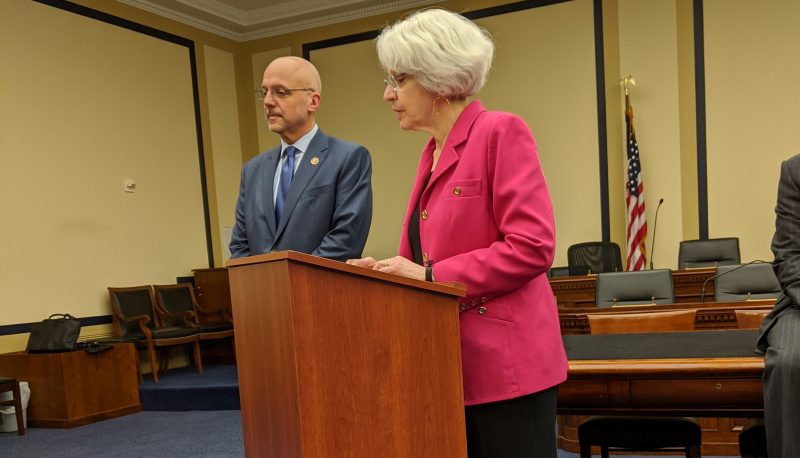 On February 6, the House Subcommittee on the Constitution, Civil Rights and Civil Liberties held the historic first hearing in the House of Representatives on the Democracy For All Amendment (H.J. Res. 2). This amendment would write core protections for democratic election finance reform into the Constitution to overturn the harms done by the Supreme Court in the 2010 decision in Citizens United v. F.E.C. and related cases.  This hearing marked a crucial milestone in the fight to get money out of politics and speaks to the power of the grassroots movement we’ve been building together over the last decade.

To kick off the landmark event, the lead amendment sponsor, Rep. Ted Deutch, D -Fla. and the  Subcommittee Chairman Rep. Steve Cohen, D-Tenn., held a press conference with key advocates from partner organizations, including PFAW, Public Citizen, Common Cause, End Citizens United, and America’s Promise. PFAW Executive Vice President of Policy and Program Marge Baker delivered remarks about the crucial progress this symbolic hearing represents in ensuring that our government works for the people, not for special interests. She said “We are in this fight because we understand that our ability to make progress on any issue we care about – criminal justice reform, climate change, gun violence prevention, affordable health care and prescription drugs – any issue depends on a democracy where the impact of one’s voice does not depend on the size of  their wallet – where large and powerful special interests can’t buty they way to solutions that work for them but not for the people.”

PFAW Executive VP Marge Baker’s remarks on the decade of progress we have made in restoring democracy through overturning this terrible #SCOTUS precedent. #DemocracyForAll pic.twitter.com/jMM6sCtfn7

After the press conference, advocates filled the hearing room to hear remarks from Rep. Deutch and Rep. Pramilla Jayapal, D.-WA, who is a co-sponsor of the Democracy For All amendment as well as a sponsor of another amendment proposal H.J Res 348 about the urgent need for amending the constitution especially in the wake of Trump’s impeachment for interfering with our elections. Now more than ever, we deserve elections that truly represent the voice of the people and produce a government that works for all of us. Monied special interests should not have any more of a say in what happens in Washington than voters.

@RepJayapal, sponsor of the amendment, testifies on the importance of clarifying that money doesn’t equal free speech. #OverturnCitizensUnited #DemocracyForAll pic.twitter.com/LKvQAxQPPn

The committee also heard testimony from four majority witnesses about how Citizens United continues to enable big spenders to steer our policy priorities and direction on core issues that affect real people and from one minority witness who testified that Citizens United strengthened our democracy. The majority’s witnesses were Robert Weissman, president of Public Citizen; Ellen Weintraub, FEC Commissioner; and Ciara Torres-Spelliscy, Professor of Law at Stetson University College of Law. The witness for the minority was Bradley Smith, Professor of Law at Capital University.

Read more about this issue and the importance of the Democracy For All Amendment in PFAW’s report “Ten Years Since Citizens United: The Growth of a Movement.”