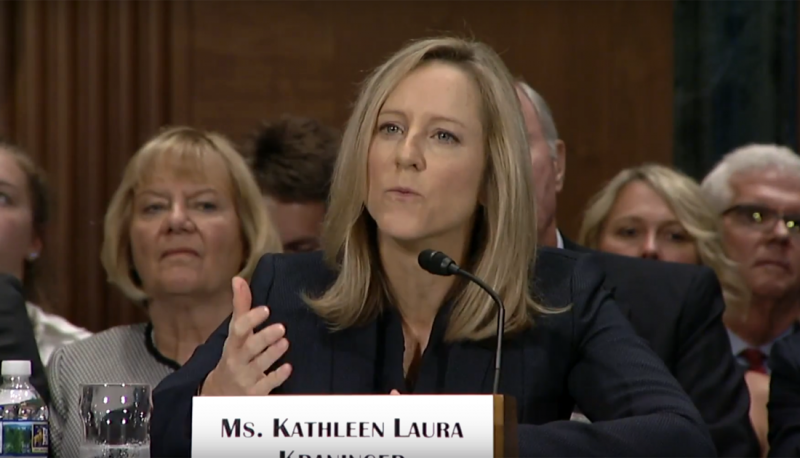 Children Belong in Their Parents’ Arms, Not Locked in Cages

In response to President Trump’s cruel and inhumane family separation policy, People For the American Way noted on June 19: “Trump’s zero-tolerance policy is ripping families apart, and he has the power to stop this nightmare.” To date, not a single person in the federal government has been held accountable, and Trump wants to promote a central player. He has nominated Kathy Kraninger to be the next director of the Consumer Financial Protection Bureau. In Kraninger’s current position with the Office of Management and Budget, she oversees program planning and implementation for the Department of Homeland Security and the Department of Justice—the two federal agencies most directly responsible for separating families at the border. PFAW agrees with allied organizations that Kraninger should not be confirmed. You can download our letter here. Click here to view our earlier committee letter.

We, the undersigned national, state, and local organizations, write to express our opposition to the nomination of Kathy Kraninger for the position of Director of the Consumer Financial Protection Bureau and to urge you to vote against her confirmation when the Senate considers this matter the week of November 26. In addition to having “no apparent relevant experience in finance, banking regulation or consumer protection”1 and agreeing with every one of Mick Mulvaney’s harmful consumer policies,2 Ms. Kraninger played a central role in administering the inhumane and un-American policy of separating thousands of children from their parents—for some, perhaps permanently—along our southwest border. Rather than being simply a disastrous policy of the past, the humanitarian crisis resulting from the separation of families continues to this day. The Administration officials responsible for implementing the tragedy unfolding deserve to be punished, not promoted.

In her current role as a program associate director at the Office of Management and Budget (OMB), Ms. Kraninger oversees both the Department of Homeland Security and the Department of Justice, the two federal agencies most directly responsible for the administration’s decision to separate more than 2,600 children from their parents at the border.3 Still today, more than 100 days after the administration was required to reunite every separated family, children remain apart from their parents.4 Even more appalling, in the time since the Senate Banking Committee voted to send Ms. Kraninger’s nomination to the full Senate, the Trump administration “found” an additional 14 children who were separated from their parent but were not previously accounted for.5 This disclosure raises serious questions about how many more children may have been—and may still remain—separated. To date, not a single person in the federal government has been held accountable for this policy, including Ms. Kraninger who had a role in its implementation.

The family separation policy that Ms. Kraninger oversaw was exceptionally cruel. In June, more than a dozen Republican senators urged then-Attorney General Jeff Sessions to suspend his “zero tolerance” prosecution policy that was the “immediate cause of this crisis,” and that was resulting in actions that were not “consistent with our values and ordinary human decency.”6 Senator Mike Crapo (R-Idaho), chairman of the committee of jurisdiction for this nomination, also stated at the time that “Children should not be separated from their families and the issue needs to be resolved quickly,”7 yet more than five months have passed and the issue is still unresolved. The entire Democratic caucus condemned the family separation policy and united behind legislation to end the practice.8 In connection with this nomination, Democratic Ranking Member Sherrod Brown (D-Ohio) and Senator Elizabeth Warren (D-Massachusetts) have—for months—been requesting documents and information to better ascertain precisely what role Ms. Kraninger played in the design and implementation of the “appalling” family separation policy but have so far received no cooperation from the nominee or the administration.9 What’s more, President Trump recently stated that his administration was once again looking at separating families, making it clear that while the policy of taking children from their parents has been paused, it is by no means ended.10

The unredeemable policy was also administered in an unconscionably haphazard and careless manner, compounding the problems that necessarily would have resulted from taking thousands of children from their parents. Senator Bob Corker (R-Tennessee) was correct that the administration made a “large mistake” by adopting and then failing to prepare for the consequences of its family separation policy and instead approaching it in a “ready, fire, aim way.”11 After the federal government failed to meet a court deadline to reunite families, the judge overseeing the case observed that “There were three agencies, and each was like its own stovepipe. Each had its own boss, and they did not communicate . . . . What was lost in the process was the family.”12

One of the most important functions of OMB is to ensure that agencies have properly planned for and are prepared to implement significant policies and programs such as this. That is no less true when it comes to terrible and ill-conceived policies such as this one. OMB’s role typically involves facilitating interagency communication and helping to manage complicated processes that cut across multiple agencies. A recent report from the DHS Office of Inspector General (OIG) confirms—as The Washington Post puts it—that the “family separation policy was flawed from the start,” including “a poorly coordinated interagency process that left distraught parents with little or no knowledge of their children’s whereabouts.”13 The OIG also found “no evidence” to support the administration’s claim that DHS and HHS had established “a central database” to facilitate the sharing of information across agencies regarding the whereabouts of separated children and their parents. Either Ms. Kraninger failed terribly at her job, putting the wellbeing and lives of thousands of children in danger, or, even more concerning, she purposefully sought to run an ineffective, cruel process in order to punish children and/or their parents, in which case she lacks the moral sense or standing to hold a government position. In either case, her nomination should be rejected.

The failures of judgment, execution and conscience associated with the family separation policy are of the highest level. As U.S. District Court Judge Dana Sabraw explained in August, “the reality is that for every parent who is not located, there will be a permanently orphaned child, and that is 100 percent the responsibility of the administration.”14 Although Kathy Kraninger disclaims personal responsibility for setting the “zero tolerance” prosecution policy that led to most, but not all, of the family separations at issue, she acknowledges that she has participated in meetings on immigration and border security policy since the beginning of the administration and that OMB “has an extensive role” in working with agencies as they carry out their policies.15

A vote to confirm Ms. Kraninger to head the CFPB is a vote to approve or excuse the conduct of one of the central figures in the family separation debacle thus minimizing the extent of this harmful and cruel policy. The Senate should reject her nomination.