PFAW members and other local activists lined the sidewalk outside of the National Republican Club Tuesday afternoon to protest a fundraiser event for House Majority Whip Steve Scalise.

Scalise, who was elected Majority Whip by his Republican colleagues back in June, has come under fire recently after it came to light that in 2002, he gave a speech to a white supremacist group affiliated with former Ku Klux Klan leader David Duke. Scalise even has referred to himself as “David Duke without the baggage.”

Incredibly, even after these revelations, the Republican caucus—including Speaker John Boehner – is standing by Scalise. And Scalise certainly doesn’t seem to think this scandal is reason to slow down his fundraising efforts, as evidenced by the meeting his team held with donors on Tuesday, where PFAW members joined protestors from other organizations including Color of Change and Jewish advocacy group Bend the Arc.

It’s hard to believe that the GOP, which has struggled so much to reach minority voters, isn’t distancing itself from party leadership with ties to white supremacists. Republicans need to be held accountable – we need to ask our Republican representatives in Congress whether, in 2015, they are brave enough to take a stand against racism.

Thousands of PFAW members have already signed the petition calling on Speaker Boehner to remove Scalise from his leadership position. Add your name now. 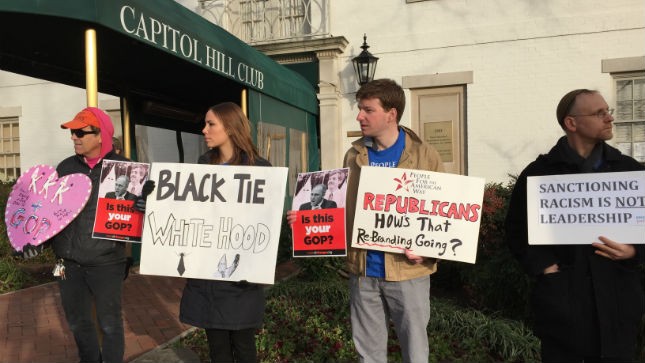 Photo via The Hill