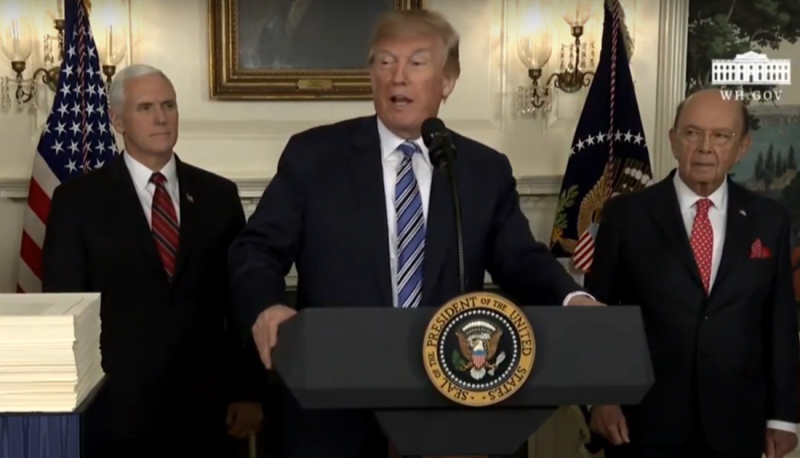 Despite yet another morning tweet tantrum, President Trump has finally signed a full funding package for this year that will keep the government open through September.

As a member of the Clean Budget Coalition, People For the American Way applauded the defeat of many of the bill’s worst poison pill policy riders.

Americans are getting a funding package for FY 2018 that is mostly free from these harmful measures, which would have threatened our environment, our campaign finance system and women’s health, rolled back Wall Street reforms and worker protections, and much more.

PFAW was especially pleased to see the removal of language that would have gutted the Johnson Amendment, which helps keep politics from overtaking the pulpit by prohibiting churches and other nonprofits from getting directly involved with political campaigns while still maintaining critical free speech rights.

Our Constitution was designed to enable a robust, diverse religious life in the United States. Gutting the Johnson Amendment would have turned churches into slush funds for politicians and wealthy donors who want to pour even more secret money into our elections; that would be a huge blow not just to the separation of church and state, but also to the health of our democracy as well as our nation’s civic and religious life as a whole.

We’re grateful for the PFAW activists that helped achieve these and other wins. We know that you’ll be there to resist the divisive and dangerous policy ideas that made it into the funding package, and that you’ll continue fighting for all of its missed opportunities.

The bill fails to provide permanent protections for Dreamers, including those eligible for the Deferred Action for Childhood Arrivals (DACA) program.

We have said it before and we will say it again: there is no defensible reason for Donald Trump to end DACA. Dreamers are our friends, our neighbors and members of the military. They have made our country stronger and boosted our economy. But Donald Trump is using them as pawns to further his administration’s extreme anti-immigrant agenda.

The bill also fails to fully repeal the ban on federally-funded gun violence research. PFAW and PFAW’s African American Ministers In Action are grateful for the glimmer of hope that the bill provides on the so-called “Dickey Amendment” ban, but we believe that full repeal is necessary to ensure robust federal support for research into the causes, effects, and evidence-based prevention of gun violence in our communities.

PFAW and AAMIA in a March 22 letter to Congress:

Across the country, students are rallying to urge policy makers to take action against gun violence. They are asking adults to enact policies to stem the rising tide of gun violence against children. There are many policies that Congress should enact to protect young people and all Americans against violence, and the health care community is united in calling for the end of one of these polic[ies] that is clearly indefensible.