Honoring King By Following in his Footsteps

The day after the anniversary of the assassination of Martin Luther King, a group of undocumented youth in Atlanta honored him by applying his message of peaceful protest against injustice. Supported by civil rights leaders like Rev. Timothy McDonald – a PFAW Board member, the founder of the African American Ministers Leadership Council, and the chair of African American Ministers In Action – they engaged in civil disobedience and highlighted the injustice of laws effectively barring them from higher education because of their parents’ immigration decisions. As reported in the Washington Post:

Eight young illegal immigrants were arrested Tuesday for sitting in the middle of a busy street in front of the Georgia Capitol, protesting their lack of access to higher education in a scene reminiscent of civil rights demonstrations decades ago.

The group, made up of mostly students, believe their plight is similar to movement the Rev. Martin Luther King Jr. led, and they met with former activists from the 1960s to hash out their civil disobedience plan. As the foreign-born youngsters sat in the road, at times holding hands, hundreds of supporters lined the street and cheered in support as the illegal immigrants were led away in handcuffs.

Before the sit-in the youngsters, their voices trembling, each stood before the crowd, took a microphone and announced: “I am undocumented, and I am unafraid.” …

The Rev. Timothy McDonald was one of the activists who met with the students at Ebenezer Baptist Church in the room where King and other preachers founded the Southern Christian Leadership Conference, the organization that led the movement for equality and justice for blacks.

“We felt the connection,” McDonald said. “We pointed out that there has never been a successful movement of any kind without young people, and that was especially true of the civil rights movement. It was the students who filled up the jails, not the preachers.”

As these young people show, part of the strength and beauty of King’s message is its universality 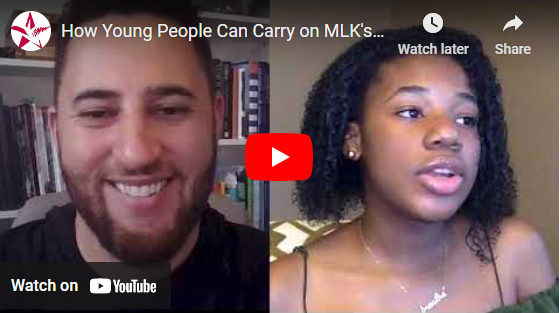