The House GOP met with widespread outrage last week when the news broke that a radical anti-abortion bill it is backing would, among other things, exclude many instances of rape from already very limited federal abortion coverage. The bill, written by Rep. Chris Smith of New Jersey, would have only allowed for abortion coverage for pregnancies resulting from “forcible rape”—a radical redefinition of rape that would exclude instances where a woman is drugged, statutory rape of a minor, and many instances of date rape.

The swift response from pro-choice groups and strong outcry from Americans (including a popular Twitter campaign) has now led the House GOP to back down on the rape provision, removing “forcible” from the language in the bill. But Smith’s bill, if passed, would still be disastrous for reproductive choice rights. The “No Taxpayer Funding For Abortion Act,” which has 173 Republican co-sponsors, would make the Hyde Amendment—the provision that prohibits Medicaid funding for abortion—permanent and apply it to all areas of the federal budget. It would, among other restrictions, prohibit people who use federal subsidies for private insurance coverage from purchasing insurance plans that cover abortion—thereby jeopardizing abortion coverage on the private market.

The fight over the bill coincided with another right-wing attempt to limit reproductive choice, particularly that of low-income women—an anti-choice group’s ACORN-style video hoax attempting to bring down Planned Parenthood. The hoax, a nationwide “sting” intended to prove that Planned Parenthood cooperates with child prostitution rings, in fact proved the opposite—Planned Parenthood promptly reported visits from activists claiming to be child sex traffickers to the FBI. But the Religious Right has been quick to jump on the videos and publicize them in their latest attempt to discredit and stop federal funding for reproductive health organizations.

As Jamelle Bouie points out in the American Prospect today, attempts to limit women’s access to reproductive health care are not only dangerous for women—especially low-income women who rely on government assistance and organizations like Planned Parenthood—but hurt programs that actually lower the instances of unwanted pregnancy:

While many women will carry an unintended pregnancy to term, many others won’t, and the data bears this out. When asked their reasons for having an abortion, three-quarters of women cited concern or responsibility for other individuals, three-quarters said that they couldn’t afford a child, and three-quarters said that another child would interfere with work, school, or the ability to care for dependents. Indeed, among women who have obtained abortions, about 61 percent had one or more children. The implications are clear: You can’t help families and you can’t lower the abortion rate without ensuring access to affordable reproductive health care.

This chart  (from Planned Parenthood via Daily Kos) shows the services that Planned Parenthood provided in 2008–services essential to helping millions of women prevent and treat sexually transmitted diseases and prevent unwanted pregancies: 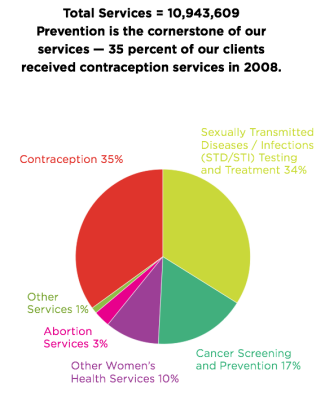 The Right’s multi-front war against reproductive choice and access to reproductive health care is not going to be stopped by reason or compassion. But, as the victory over the GOP’s redefinition of rape shows, it can be stopped by the voices of those committed to fighting back.

Click here to sign a letter to President Obama and Members of Congress in support of Planned Parenthood.