Earlier today the House Judiciary Committee opened its fall session with the first public hearing in its investigation into Planned Parenthood, placing a one-sided, far-right smear campaign as a clear priority over a full and fair examination of the facts. Or as PFAW Senior Researcher Miranda Blue put it, “one piece of the larger far-right effort to not only shutter Planned Parenthood’s critical women’s health services but to end legal abortion entirely.”

Take the title of the hearing – Planned Parenthood Exposed: Examining the Horrific Abortion Practices at the Nation’s Largest Abortion Provider. Ranking Member John Conyers called it “one-sided.” Representative Jerrold Nadler of the Constitution Subcommittee agreed that it was a “farce” for having stated the Committee’s conclusion at the outset.

Then there’s the witness list – Not one majority witness with direct knowledge of current Planned Parenthood practices, nor any who could speak with authority on the Center for Medical Progress. Representative Nadler pointed out that if the majority had any confidence in CMP’s David Daleiden that they “would have bought him here to testify before this committee.” In fact, as James Bopp twice testified, he was told by the majority that the videos were not the subject of their investigation. A further line of questioning pressed by Representative David Cicilline made clear just how little consideration the Committee has for CMP and its own practices.

Finally the discussion itself – An overwhelming amount of energy spent rehashing decades of settled law and Supreme Court precedent at the expense of women who seek not only abortion services from Planned Parenthood, a very small portion of their work, but a wide range of reproductive and preventive healthcare.

Don’t forget the discussion that they aren’t having – As they take up Planned Parenthood, Congress is more than two years past due in restoring what the Voting Rights Act lost in 2013 through the Supreme Court’s damaging Shelby County v. Holder decision. They should instead be holding a hearing on the Voting Rights Advancement Act.

Many of you stood up to Tell House Judiciary Chair Bob Goodlatte: Focus on Restoring the Voting Rights Act, Not Attacking Women with Planned Parenthood Witch Hunt.

Your petition signatures were hand-delivered to the Committee prior to its hearing. 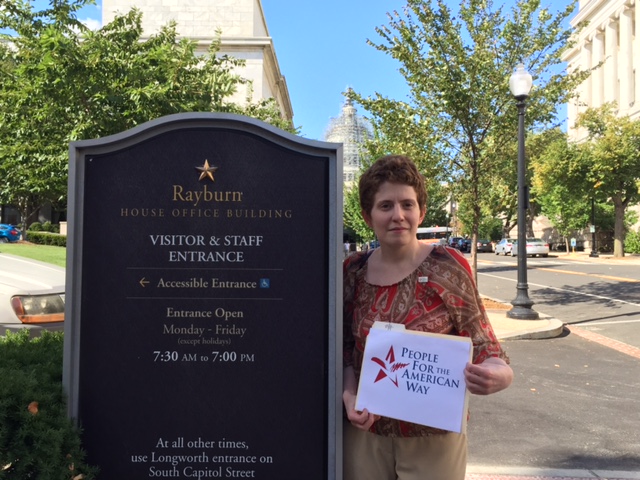