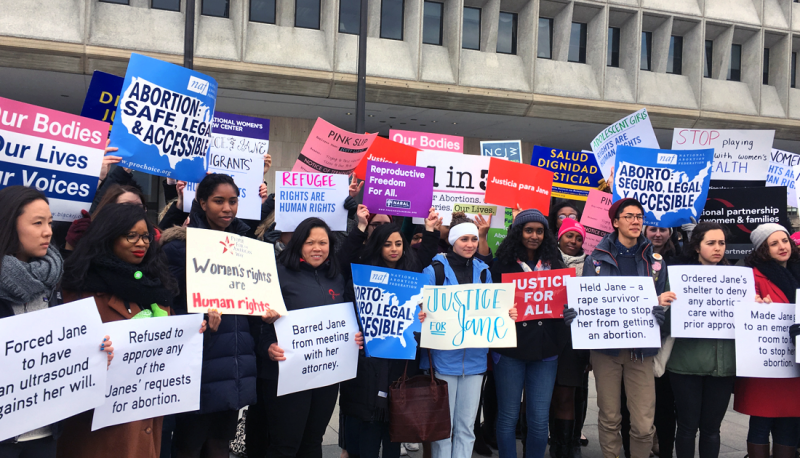 On March 29, Immigration and Customs Enforcement (ICE) went public with a policy shift that ends the presumption of release for pregnant detainees. The U.S. immigration system has proven itself woefully inadequate—with health- and life-threatening consequences—in addressing the reproductive health care needs of immigrants and asylum seekers. That’s why ICE had reserved detention for extraordinary circumstances and released most pregnant individuals to continue their cases outside of detention. Now ICE not only wants to keep more of these individuals in custody but also wants to remove critical reporting requirements for their care. People For the American Way and PFAW’s African American Minsters In Action were among more than 250 organizations committed to protecting civil and human rights that wrote to ICE on April 11 and urged them to reverse course. You can download our letter, with signers and footnotes, here.

As organizations that are committed to protecting civil rights and human rights, we are deeply concerned about the new U.S. Immigration and Customs Enforcement (ICE) directive—issued on December 14, 2017, and made public on March 29, 2018—which eliminates the presumption that ICE should not detain pregnant individuals except in extraordinary circumstances and removes critical reporting requirements regarding the treatment of pregnant individuals. We urge ICE to discontinue its policy of detaining pregnant individuals, who should be able to access the critical healthcare services they need, and instead release them to continue their cases outside of detention. We also call on ICE to reinstitute a presumption that pregnant individuals should not be subject to detention. No one, regardless of immigration status, should be denied necessary reproductive healthcare.

Even before ICE’s recent announcement of a shift in policy, the immigration detention system had proven itself incapable of handling the healthcare needs of vulnerable populations, including those with serious medical and mental health needs. A complaint filed with the Department of Homeland Security’s Office for Civil Rights and Civil Liberties (CRCL) and Office of Inspector General (OIG) in September 2017 detailed numerous cases of inadequate care and mistreatment, including reports of inaccurate pregnancy tests and delayed access to prenatal care, threatening both the pregnant individual’s health and the health of their fetus.1 Some women have tragically suffered miscarriages while being held in detention. Nursing mothers report not being given information about or supplied with breast pumps that would allow them to maintain their milk supply while separated from their children.2 ICE’s policy change will likely result in more pregnant individuals in detention and pregnant individuals detained for longer periods of time, thus exacerbating these problems and further endangering the lives of pregnant people.3 For example:

On top of struggling to access needed medical care, pregnant individuals in ICE detention often are forced to cope with extreme stress. Many are separated from their families, children, and communities during detention, while waiting for the outcome of uncertain immigration processes. Many are detained while seeking protection from the violence or abuse that they survived in their countries of origin or on their journeys to the United States. These circumstances make pregnant detainees particularly vulnerable to mistreatment and abuse, and make the need for adequate care even greater.

Several medical and mental health organizations, including the American College of Obstetricians and Gynecologists (ACOG), the Mount Sinai Human Rights Program, the American Academy of Pediatrics (AAP), and the American Academy of Family Physicians (AAFP) have stated their opposition to ICE’s recent shift in policy away from a presumption of release for pregnant individuals, citing the deleterious effects of detention on the medical and mental health7 of pregnant individuals and children. Medical experts state, “All pregnant women and adolescents held in federal custody, regardless of immigration status, should have access to adequate, timely, evidence-based, and comprehensive health care. Pregnant immigrant women and adolescents should have access to high levels of care, care that is not available in these facilities.”8

The arbitrary detention of pregnant people also violates international human rights norms. The UN Special Rapporteur on Torture and Other Cruel, Inhuman or Degrading Treatment or Punishment has noted that the imprisonment of pregnant women must be reduced to a minimum and considered only when other alternatives are unavoidable or unsuitable.9 The UN Special Rapporteur on Torture has also noted that lack of access to reproductive healthcare for women in immigrant detention facilities can amount to torture or ill treatment.10 Some in detention are so fearful of the impact that prolonged detention will have on their health that they may choose deportation to countries where they may face harm and persecution over the prospect of continued detention.11

Further, the new policy also removes critical reporting requirements for oversight of the detention system, despite the evidence that oversight is desperately needed. Detention is inappropriate and dangerous for pregnant individuals, and this lack of oversight risks their health and safety even further. At minimum, the ICE detention system needs more, not less, transparency and accountability, to ensure that immigrants and asylum seekers have access to adequate and culturally sensitive reproductive healthcare.

We therefore urge ICE to reinstitute a presumption of release for pregnant individuals in its custody, develop community-based alternatives to detention for pregnant people who otherwise must be detained, such as the successful but terminated Family Case Management Program (FCMP)12 and reinstate robust reporting requirements that will ensure oversight of the detention system. In addition, we urge your offices to cooperate fully with the Government Accountability Office’s investigation and audit of the conditions for pregnant women in prisons and detention centers,13 and any investigation into the complaint filed with the Department of Homeland Security’s Office for Civil Rights and Civil Liberties and Office of the Inspector General.14