Is Neil Gorsuch Walking Out the Door on Overturning Roe? Nope! - People For the American Way
Skip to main content

Is Neil Gorsuch Walking Out the Door on Overturning Roe? Nope!

Today Supreme Court nominee Neil Gorsuch delivered a lovely talking point when he insisted he would have walked out the door if Donald Trump had asked him about overturning Roe v. Wade.

But that shouldn’t put anyone’s mind at ease.

Donald Trump made clear throughout the election that he’d impose a clear litmus test on his Supreme Court nominees, and he proved that he meant it by outsourcing his selection process to two right-wing groups with a long hostility to women’s reproductive freedom, the Heritage Foundation and the Federalist Society. Just this weekend, the New York Times published an in-depth profile of conservative legal activist Leonard Leo and the role he’s played shepherding Gorsuch’s selection and confirmation process. 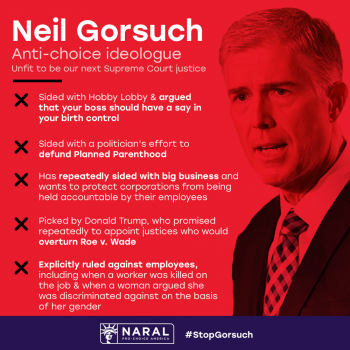 So, when Neil Gorsuch denied that he was asked point blank by Trump about overturning Roe, he didn’t answer the real question about his record.

It might be better to ask whether he’s ever talked to Leonard Leo about his opinion about Roe, or anyone else at the Federalist Society or the Heritage Foundation for that matter. Senators should probably know if he’s told his former clerks how he feels about Roe, or his former colleagues at the White House, many of whom are connected to the right-wing legal movement. Or even his billionaire backer Phil Anschutz, who according to media reports has played a key role in helping make Gorsuch’s nomination a reality. After all, any of those individuals could have passed the message along loud and clear that Gorsuch would be a firm vote to criminalize abortion.

In any case, it’s clear that Donald Trump and his allies know a lot more about Gorsuch’s judicial philosophy than we do.

Does anyone credibly believe they’d be pushing him for the Supreme Court if they didn’t?