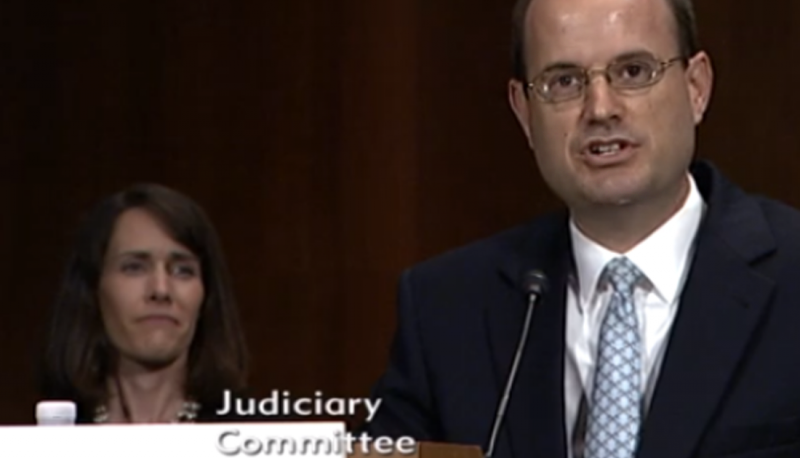 On April 10, President Trump nominated Allen Winsor to be a federal judge in the Northern District of Florida. The Senate Judiciary Committee held Winsor’s hearing on May 23. His committee vote is scheduled for June 14. People For the American Way wrote to committee members to express our opposition to the Winsor nomination. You can download our letter here.

On behalf of the hundreds of thousands of members of People For the American Way, we write in opposition to the nomination of Allen Winsor to be a federal judge in the Northern District of Florida. His record demonstrates a view of the law that is incompatible with a lifetime position in our nation’s judiciary.

During his career, Winsor has more than simply represented the interests of a client and taken legal positions that can’t automatically be attributed to him personally. As with so many of President Trump’s nominees, Winsor chose the client in order to pursue their shared agenda.

From 2008-2010, while still in private practice, Winsor was part of the Republican National Lawyers Association (RNLA), a right-wing organization comprised of attorneys using their legal training to advance the policy goals of the Republican Party. During these years, the RNLA opposed the nominations of President Obama’s first two highly qualified Supreme Court nominees—Sonia Sotomayor and Elena Kagan—and waged an aggressive assault against voting rights that included the fraudulent yet successful effort to destroy ACORN.i

In 2013, he chose to become part of the reactionary Rick Scott administration, whose agenda was clear. As soon as they took office after the 2010 elections, Gov. Scott and Attorney General Pam Bondi worked together to roll back previous advances in the right to vote. Reversing the policy of the previous administration, they made it far more difficult for previously incarcerated people to regain that most basic of rights: the right to vote, even referring to it as a privilege that should be earned.ii

Just a few weeks later, Gov. Scott signed an extremely regressive elections law that created unneeded obstacles to registering and voting. As the Brennan Center noted at the time:

[The new law will make] it harder to register voters, prohibiting registered voters who move before an election from updating their address at the polls, and greatly reducing early voting opportunities.

The burdens of Florida’s misguided elections bill will fall disproportionately on the shoulders of low-income and minority voters, renters, and students: eligible voters that already face the biggest hurdles to vote. And the groups that try to register these voters, from student organizers to the League of Women Voters, will be penalized for their attempts to bring more eligible citizens into our democracy.iii

This was the administration that Winsor ended his career in private practice to join in 2013. When Attorney General Bondi sought someone who would protect and promote the administration’s sharply conservative agenda in the courts, she turned to Winsor, appointing him solicitor general.iv

Those to whom we entrust the solemn responsibility of a lifetime judicial position must recognize that all of our liberties rest on the vitality of one right in particular: the right to vote.

Winsor also fought for a variety of other restrictions on liberty. For instance, either through litigation or amicus briefs, he:

Winsor used the Solicitor General’s office, just as he used membership in the RNLA, to persuade courts to accept legal arguments that reflected his own views, not just those of a client. His antagonism toward our most basic rights has no place in a judiciary designed to protect those rights. We urge you to oppose his confirmation.