Last week, the neutral Congressional Research Service released a report analyzing how long consensus judicial nominees have had to wait before confirmation under various presidencies, from Ronald Reagan to today. The report quantifies what we already knew: President Obama’s nominees are being obstructed to a degree not seen before.

Remember – these are uncontroversial nominees, which the CRS study defined very strictly. If even one member of the Judiciary Committee voted no in a roll call vote, they were excluded from the analysis. Similarly excluded were nominees who received a mere six or more votes against their confirmation from among the 100 senators.

The CRS analysis shows that delays have been increasing with each successive president. But the delays imposed on President Obama’s nominees are unprecedented.

Writing in Slate, the Constitutional Accountability Center’s Doug Kendall has put the numbers since 1981 into two graphs, one for circuit and one for district courts. The overwhelming majority of Reagan nominees took less than 100 days, and very few took more than 200 days. The situation is flipped for President Obama’s uncontroversial nominees: Most have been forced to wait more than 200 days from nomination to confirmation, and only a tiny fraction have been confirmed in under 100 days. Comparing only Bush and Obama, it is clear that far, far more of President Obama’s consensus nominees have had to wait far, far longer than President Bush’s. 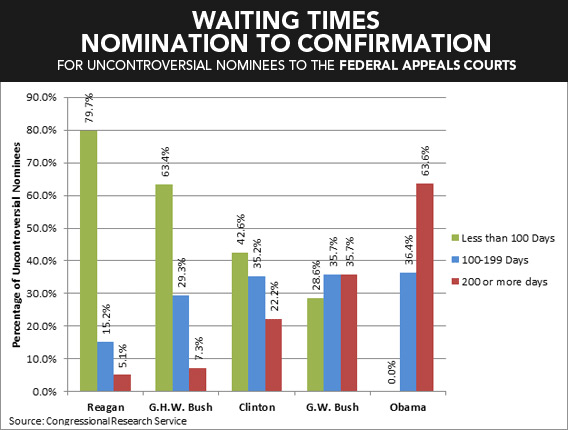 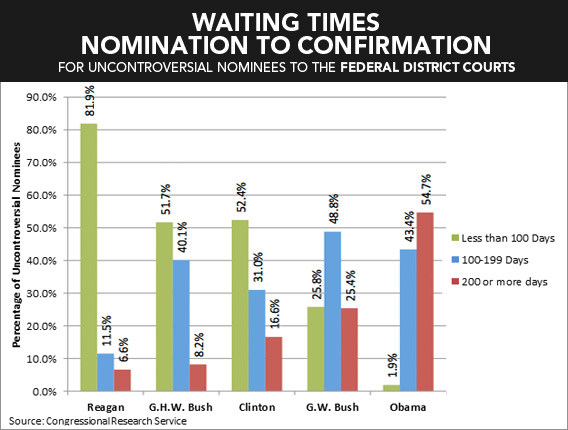 The slowdown is bad because it surely means that some of the best judicial candidates decide not to put themselves through this stalled process. It also leaves unfilled vacancies that the judiciary has declared "emergencies" because of the heavy workload facing the sitting judges on those courts. Our federal judiciary, and the people it serves, deserve far better.

When the Senate returns for a lame duck session in November, this obstruction must come to an end. Americans deserve better than empty courtrooms and the ongoing denial of justice.