Kavanaugh has lied under oath. His credibility is nil. - People For the American Way
Skip to main content

Kavanaugh has lied under oath. His credibility is nil.

Senate Republicans are trying to set up a sham hearing next week for Supreme Court nominee Brett Kavanaugh to say under oath that he didn’t attack Christine Blasey Ford. But Kavanaugh’s word under oath is worthless: He demonstrably lied in 2004, 2006, and just this month.

His lies about stolen material are perhaps the most brazen. From 2001-2003, Mr. Kavanaugh worked in the White House Counsel’s office to advance then-President George W. Bush’s judicial nominees through the Senate confirmation process. A number of the nominees generated intense opposition from committee Democrats, and this remained a major area of confrontation throughout Mr. Bush’s presidency. In his role advancing judicial nominations, Kavanaugh worked closely with committee Republican staff, including senior Republican staff member Manuel Miranda.

In 2003, it was reported that Miranda had discovered that Democrats’ confidential emails and files could be accessed by Republican staff, contrary to what Democratic staff had believed, and that he had long been surreptitiously accessing them. An investigation found that Miranda had obtained extensive access to confidential Democratic documents from late 2001 through much of 2003. When Kavanaugh was subsequently nominated to the D.C. Circuit and testified before the Judiciary Committee in 2004—after the theft had become public—and again in 2006, he denied any awareness whatsoever that Miranda’s emails contained information that was obviously derived from Democratic files.

Before we look at the specific emails, read them not only with his 2004 and 2006 denials in mind, but also to see if they are consistent with his most recent testimony. At his Supreme Court confirmation hearing in early September, he claimed not to have suspected that any of the information was stolen, since committee staff regularly share information across the aisle:

[I]t’s common, I think, for everyone to talk to each other at times, and share information. At least, this is was my experience.

[M]y understanding of this process is that the staffs do talk with one another, that they’re not camps with no communication. And that was my experience when I worked in the White House.

How would Miranda know about a “confidential” email being distributed among Democratic staffers? Why would he insist on such a high level of secrecy about this information?

Later in the same email, Kavanaugh read the following about the controversial nomination of Priscilla Owen to the Fifth Circuit, which Democrats strongly opposed. The email mentioned information that was being shared only among Democrats:

There is simply no way Miranda could have obtained such information honestly. Democratic staffers surely would not be sharing strategy memos with the very people they were strategizing against.

Two days later, he reported on then-Chairman Patrick Leahy’s concern that he didn’t yet know how two Democratic senators were planning to vote on the Owen nomination:

“I have it on 100% info” does not suggest that this was publicly known information, and Democrats could hardly have been expected to share their concerns about their colleagues’ votes with the party whose nomination they were trying to block. Miranda’s email to Kavanaugh continued, proposing strategy based on his intelligence, and making its dishonest provenance even more apparent:

“In either case, refer only to rumor, not to me.”  If this was just information that Democrats had shared willingly and openly with their Republican colleagues, then why the need for secrecy?

Two weeks later, Kavanaugh received another email from Miranda containing extremely sensitive information that Democratic committee members could not possibly have wanted the Republicans to know:

“According to the Leahy staff” in this context cannot mean information willingly shared across the aisle. That is not how a major conflict between two parties works in the United States, and Brett Kavanaugh knows that.

On March 18, 2003, Miranda relayed the points Chairman Leahy was planning to make about the nomination of Miguel Estrada to the D.C. Circuit, which Democrats very much opposed. But Miranda didn’t write up a summary of the points. Instead, in an email with the subject line “For Use and Not For Distribution,” he sent a draft of the statement Leahy and his staff were preparing: 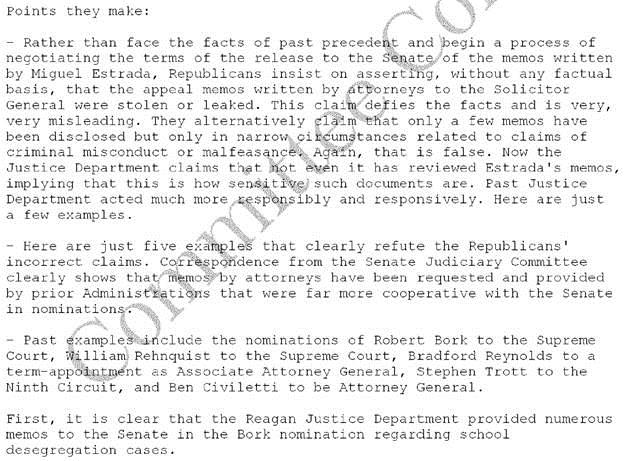 The draft went on for many pages. Kavanaugh could not have thought that it was written by Miranda, or that Leahy’s staff had simply shared it with him. It was a stolen document, plain as day.

After reading smoking gun after smoking gun, let’s review what Kavanaugh said—under oath— just a year later in 2004 to then-Chairman Orrin Hatch during his confirmation hearing for the D.C. Circuit:

Hatch: Now, this is an important question. Did Mr. Miranda ever share, reference, or provide you with any documents that appeared to you to have been drafted or prepared by Democratic staff members of the Senate Judiciary Committee?

Kavanaugh: No, I was not aware of that matter ever until I learned of it in the media late last year.

Hatch: Did Mr. Miranda ever share, reference, or provide you with information that you believed or were led to believe was obtained or derived from Democratic files?

Kavanaugh: No. Again, I was not aware of that matter in any way whatsoever until I learned it in the media.

Kavanaugh got away with brazenly lying because committee Democrats didn’t have access to his White House emails. Those didn’t surface until his 2018 Supreme Court nomination (and even then, Kavanaugh’s fellow Republicans sought to prevent their release to the American people by needlessly labeling them as “committee confidential”).

And when those emails were finally released, Kavanaugh again lied under oath to cover up his previous lies. As noted above, Kavanaugh’s current explanation is that he’d thought this was the type of information committee staffers regularly share with each other. As the emails themselves show, that is false.

Nothing Brett Kavanaugh says next week about the alleged sexual assault can have any credibility. He lies under oath, and he does so with ease.