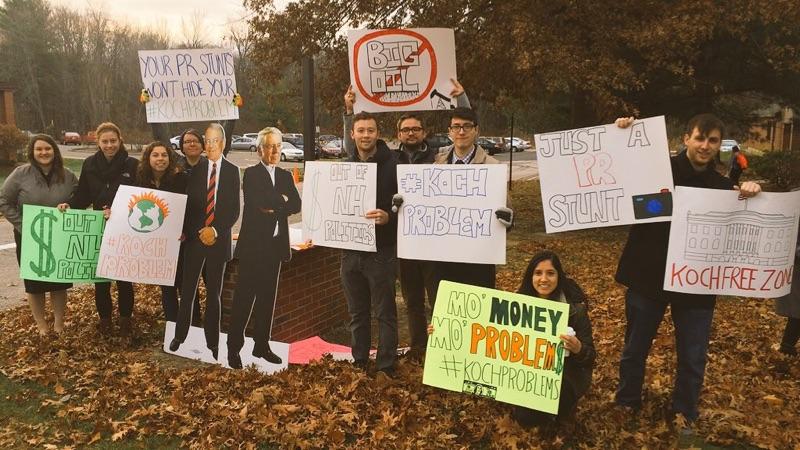 It’s not just secret money and front groups for the Koch Brothers this election season. Sometimes, the Kochs are up front in their attempts to sell their toxic agenda — like when they decide to send Koch Industries Chief Communication and Marketing Officer, Steve Lombardo, to St. Anselm’s Institute of Politics to pitch a softer side of Koch.

A group of about 10 activists from People For the American Way and Granite State Progress gathered Tuesday outside the Institute of Politics to hold signs that read “#KOCH PROBLEM” and “PR Stunt” — among other messages.

The event was brazenly titled, “Beyond the Political Spin: How Koch is is Driving Freedom, Fairness and Prosperity.”

The Kochs — no strangers to attempting to buy support at college campuses through stipulations about hiring and coursework — are planning on spending up to $900 million in this year’s election cycle through their secretive network of organizations.

When asked if the Kochs will acknowledge that the candidates they back are beholden to them, Lombardo failed to explain a difference between other forms of “crony capitalism” the Kochs like to decry and the political work done by the Koch network.

Question: “In a recent interview with the Wichita Eagle, Charles Koch claimed that politicians are ‘beholden to corporations and cronies who get them re-elected’ and deemed this ‘welfare for the wealthy.’ The Koch network has poured millions of dollars into our political system—do the Kochs agree that the candidates they back are beholden to them?”

Lombardo: “Yeah, that’s a great question. I’m going to answer it the way Charles has recently answered that. And that is – beholden is the wrong word. Charles is frustrated right now, to be honest with you, he’s very frustrated that a lot of the candidates that the network that he’s a part of, along with a lot of other donors, hundreds of donors, thousands…have not done a lot of things that they said they were going to do, okay. And he’s quite frankly very frustrated and we have not at this point in time, supporting any presidential candidate. And Mr. Koch believes- is worried right now that none of them are going to do what they say they’re going to do.  So the folks that we supported in 2014 frankly a lot of them have not lived up to the things that I’ve been talking about in terms of fighting corporate welfare, in terms of supporting criminal justice reform among other things. Beholden is wrong. We all, everybody who votes for someone or contributes money to them, contributes $5 — you’re hoping that they’re gonna do what they said they were gonna do. Now if you call that beholden you can call that beholden, but to me, it’s I give $5 to a candidate because I think — they said they were gonna do something, and I go ‘wow, I agree with that, I want them to do that, I’m giving them $5.’ Now you can call that beholden, or $500 million or whatever it might be…I don’t think it’s the same way but we are expecting them to do the things they say they were gonna do, and frankly a lot of them aren’t.”

The Kochs clearly expect a lot in return for the amount they’re spending on politics — so yes, the candidates that they back are beholden to them, and much more so than they would be to any small donor.  Downplaying their own effectiveness doesn’t change the fact that they are blatantly attempting to buy influence, with their network expected to spend as much as, or more than, either political party.