Over a two-week span, People For the American Way (PFAW) staff and volunteers joined PFAW board member Dolores Huerta for a four-state tour to get out the vote in Latino communities and push back against anti-immigrant, anti-Latino rhetoric and policies of Republican presidential candidates.

Huerta also spoke at a rally that thousands attended. As Suzanne Gamboa at NBC News reported:

“Huerta planned to participate in an event with other Latino leaders Wednesday afternoon to launch a voter registration campaign and protest rhetoric of the campaign and some proposals she considered to be anti-Latino.

[…]"The Republican candidates are not really reflecting or even addressing the needs of the Latino community or American families," Huerta said in an phone interview with NBC News.

After Colorado, Huerta traveled to Charlotte, North Carolina to get out the vote leading up to municipal elections and to call out North Carolina Governor Pat McCrory for signing the severely anti-immigrant HB 318.

After her third radio interview of the morning – which also happened to be the day before Halloween – Huerta posed with the radio hosts of Charlotte’s La Raza 106.1.

Huerta joined Charlotte voters and activists to deliver an “award” to Gov. McCrory for his ability to disguise himself as a friend of immigrants and then to turn his back on the community. 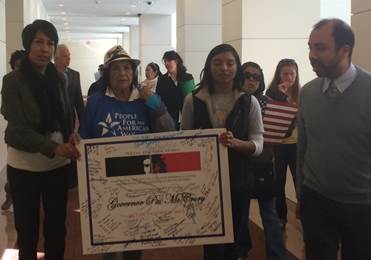 After Charlotte, Huerta joined PFAW staff and volunteers to get out the vote in Virginia. PFAW had already begun laying the groundwork in Virginia with Spanish-language ads encouraging voters to head to the polls on Election Day.

The Washington Post’s write-up of the ad included this explanation from PFAW’s Carlos A. Sanchez:

“By highlighting in Spanish how local and national Republican politicians from [former Virginia gubernatorial candidate] Ken Cuccinelli to Donald Trump have demonized immigrants, our ad urges voters to stand up against them by going to the polls."

While on the ground, Huerta mobilized voters and volunteers in State Senate District 29 to support Democrat Jeremy McPike.

Our efforts paid off, as McPike won his race!

To wrap up our four-state tour, Huerta traveled to Wisconsin leading up to the Republican debate there. PFAW joined with Voces de la Frontera Action to shed light on the anti-immigrant, anti-Latino policies of all the Republican candidates.

Huerta also joined with allies for a Fight for $15 rally urging politicians to support a $15 minimum wage. Watch Huerta discuss her efforts on local CBS.

The 4-state tour is a part of PFAW’s Latinos Vote! program. Stay tuned for more updates on our work!

Dolores Huerta: Time Is Running Out to Defend Voting Rights