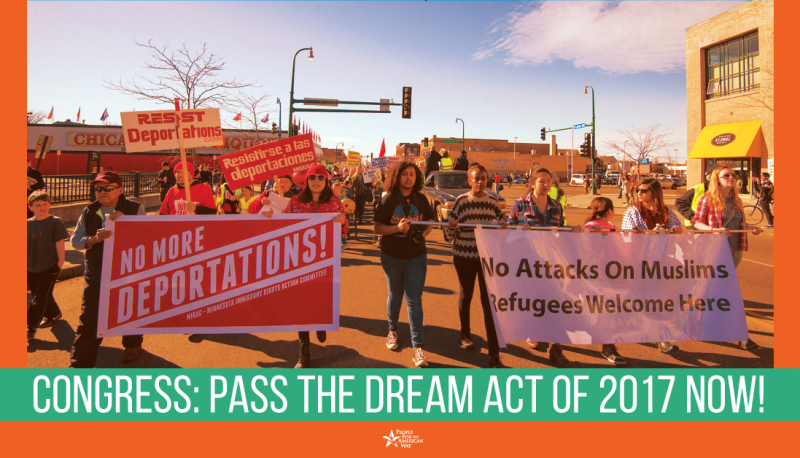 On September 5, the Trump administration announced the end of the Deferred Action for Childhood Arrivals (DACA) program that has provided 800,000 young adults with work authorization and a reprieve from deportation. People For the American Way called President Trump’s DACA decision “cruel, unjust and devastating” and urged Congress to protect Dreamers. PFAW has since joined the nearly 200 civil and human rights groups that stand united in support of immediately passing the Dream Act without amendment. You can download this letter here.

On behalf of The Leadership Conference on Civil and Human Rights and the undersigned 184 national, state, and local organizations, we urge you to immediately pass the Dream Act without amendment.

The Deferred Action for Childhood Arrivals (DACA) program provided a measure of common sense and compassion to immigrants who were brought to this country as children and who have grown up here. Approximately 800,000 young adults who grew up in this country have registered with the federal government, submitted to background checks, paid fees, and have worked to obtain an education. In return, they were given a reprieve from the threat of deportation, work authorization, and the ability to make valuable contributions to our communities. They have gone on to raise families of their own, volunteered to serve in our military, started their own businesses, and become integral to our communities.

President Trump’s decision to end DACA does a grave injustice to hundreds of thousands of young immigrants. His decision is even more tragic because it was unnecessary. While the President has manufactured this crisis, the responsibility to fix it now falls to Congress.

The President has repeatedly tried to divide this nation, but we urge you to show real leadership. We need more than rhetoric. We need action. These vulnerable young people should not be used as bargaining chips or hostages by those who want to exploit President Trump’s cruel decision.

We stand united in calling on you to immediately pass the Dream Act without amendment so that young people who were brought to this country when they were children are protected. We call on you to treat this with the urgency you would if it were your own son’s or daughter’s life at stake.

Trump Judge Rules Against Asylum Seeker Who Didn’t Have an Attorney to Explain What Was Required of Her: Confirmed Judges, Confirmed Fears