More Ugliness from the Right: Anti-Gay Sentiment in Campaign Literature - People For the American Way
Skip to main content

More Ugliness from the Right: Anti-Gay Sentiment in Campaign Literature

As we have documented in recent days, the approaching elections have, with an assist from the McCain campaign and GOP strategists, brought some real ugliness into the open, including outright racism.

Of course, an election year would not be complete without overt and covert appeals to anti-gay sentiment from right-wing politicians.  It’s at its most overt in the anti-equality ballot campaigns in California, Florida, and Arizona, which are being massively funded by national Religious Right groups and Mormon donors.

But it also shows up in appeals grounded in the favored language of family values.  Below you can see scans of a mailing for an Ohio State Representative candidate who announces, under the heading “Love of Family,” that “Michael Keenan will strengthen families by keeping marriage between a man and a woman.”

No word on how that strengthens Ohio families who might be dealing with lost jobs, slumping wages, lack of affordable health care, or any of the other difficulties that could put stress on marriages.  Thank goodness he’ll keep committed gay couples from the legal protections that marriage can provide!  Think how much that will strengthen Ohio’s struggling families! 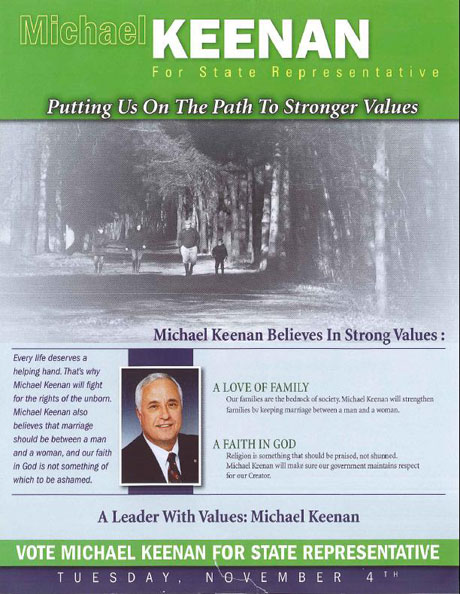 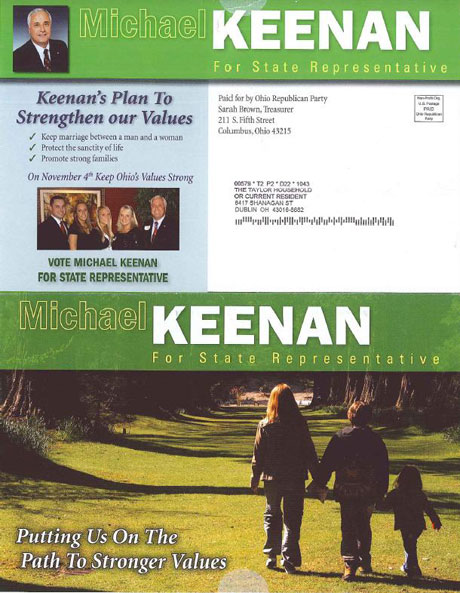