PFAW activists and allies are continuing to pressure Sen. Kelly Ayotte for her reluctance to support a constitutional amendment that would overturn cases like Citizens United.

A group of New Hampshire activists, many of whom have worked to pass local resolutions in their towns in support of an amendment, met with Sen. Ayotte’s legal counsel in May to deliver over 12 thousand petitions in support of the Democracy For All Amendment— a federal constitutional amendment that would allow Congress and the states to set reasonable limits on money in elections. 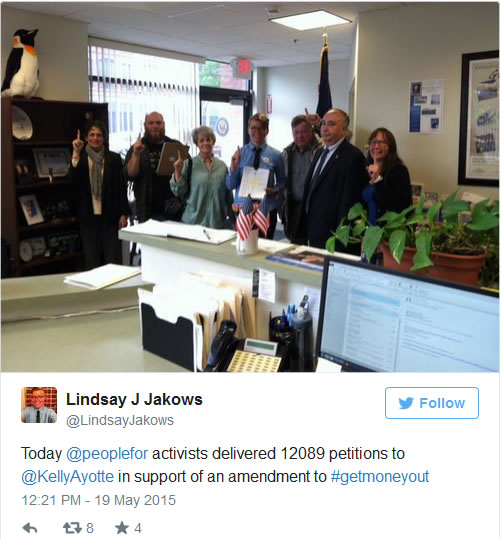 Over a month later, her office has given no indication she will support the Democracy For All Amendment.

In previous public statements she has characterized a constitutional amendment as “dangerous.”  And in a recent form letter to activists, Sen. Ayotte wrote,

By creating a “carve out” to the First Amendment that gives politicians the power to limit free speech and stifle political dissent, the Udall proposal jeopardizes all Americans’ freedom of speech rights – and essentially says that our Founding Fathers got it wrong. It would also alter the First Amendment in ways that jeopardize more than political speech.

Of course, we know this issue isn’t about protecting free speech; it’s about everyone having an equal say in our elections and not having their own voices drowned out by a flood of big money.

In light of Sen. Ayotte’s clear refusal to recognize the influence of money in politics as stifling the voices of all Americans, PFAW activists and allies created photo petitions this weekend to send Sen. Ayotte a clear message about why 69 percent of New Hampshire voters support a constitutional amendment.

Democracy For All Amendment GetMoneyOut Kelly Ayotte money in politics