Our society is one which remains afflicted by institutionalized discrimination. Although most Americans believe protections already exist, it is still perfectly legal to fire someone for being lesbian, gay, or bisexual in 29 states, and for being transgender in 34.

Indeed, a new report released Tuesday by the Movement Advancement Project, the Center for American Progress, the Human Rights Campaign, and others provides a comprehensive synthesis of the wealth of evidence documenting the inequalities faced by LGBT workers. Titled “A Broken Bargain: Discrimination, Fewer Benefits and More Taxes for LGBT Workers,” the report presents extensive documentation of bias in the recruitment process, of hostile work environments, of persistent wage disparities as compared to non-LGBT employees, and of dramatically reduced access to health insurance, family and medical leave, retirement benefits, and disability and survivor benefits – despite paying higher taxes due to the inability of LGBT households to file jointly.

The impact on families is devastating. According to the report, inequality when looking for jobs, inequality on the job, and inequality in benefits received from jobs combine to make LGBT parents twice as likely to live near the poverty line when compared to non-LGBT counterparts. 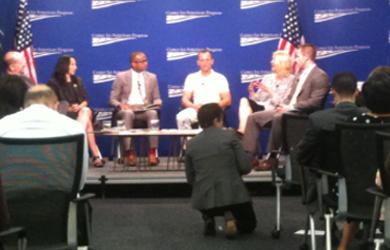 While the Equal Employment Opportunity Commission recently found that existing Title VII law covers gender identity, courts are not required to give any deference to its legal interpretations, so legislation is required. Such a bill to guarantee much-needed federal employment protections for LGBT people was recently introduced in the 113th Congress. Known as the Employment Non-Discrimination Act (ENDA), the bill has been introduced in nearly every Congressional session since 1994, and the fight for basic workplace equality continues to the present day.

Further, corporate America knows that ENDA is good for business. As Senator Jeff Merkley (D-OR) said Tuesday morning at the release event for the report,

“When we asked employers about this, many of them said, ‘well, isn’t it already illegal’? … In our Fortune 500 companies, over 400 have policies addressing LGBT discrimination, and well over half have addressed gender identity. In the 21 state laboratories in which this has been implemented, there has been no concern over [costs to business caused by] additional lawsuits … they are a small percentage of all lawsuits to do with gender, religion, and race. This is a non-issue.”

Passing ENDA, then, would not only help alleviate discrimination faced by LGBT workers, but would also help businesses attract the best qualified employees possible. As Bill Hendrix from Dow Chemical said at the event,

“It’s hard enough already to find good people to fill jobs. Why would you begin by excluding parts of the population?”

Trump Judge Affirms Dismissal of Racial Discrimination Case by Black Man Who Was Fired on His First Day on the Job: Confirmed Judges, Confirmed Fears