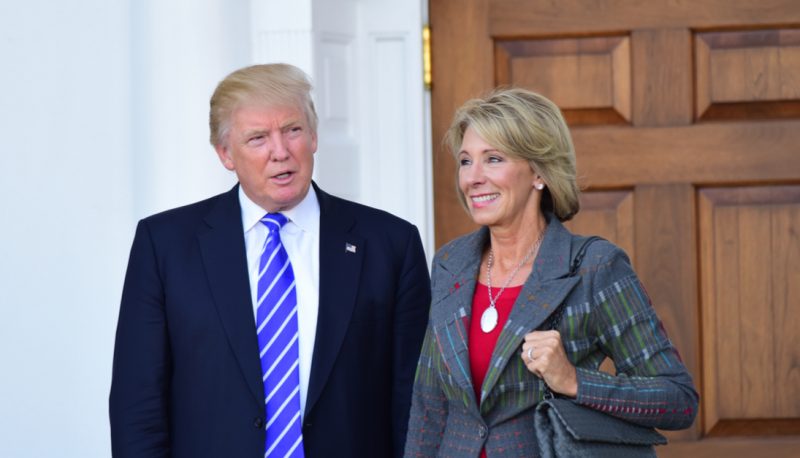 Fourteen months into the Trump administration, Secretary Betsy DeVos and the Department of Education have amassed a dismal record when it comes to protecting all students, including transgender students who face discrimination that not only impedes their ability to learn and succeed but also has damaging consequences for their health. On February 8, the Department falsely claimed to BuzzFeed News that bathroom access complaints do not fall under their Title IX obligations and thus will not be investigated. People For the American Way and PFAW’s African American Ministers In Action were among nearly 100 organizations that wrote to the Department to clarify their obligations under the law and urge them to reverse course. Our February 28 letter follows below and is available here. That same day, Politico reported just how many complaints from trans students have been dismissed by the Department under Trump—most of them.

On behalf of the undersigned education, LGBTQ, and other civil rights and research organizations, we write to express our grave concerns regarding reports that the Department of Education’s Office for Civil Rights (OCR) is automatically dismissing complaints from transgender students who have faced discrimination in accessing restrooms.

The Department of Education is obligated to ensure equal access to educational opportunities and fully enforce civil rights protections for all students, including Title IX of the Education Amendments of 1972. Yet the Department turned its back on some of the most vulnerable students last year with the withdrawal of important guidance that clarified schools’ obligations to protect transgender students under Title IX. While your own statement at the time assured that OCR “remains committed to investigating all claims of discrimination, bullying, and harassment,”1 (emphasis added), according to a Department spokesperson, it is now the policy of OCR to reject without investigation all complaints from transgender students who are barred from using restrooms consistent with their gender identity.

Federal appeals courts in the Sixth and Seventh Circuits have ruled that transgender students are indeed covered under Title IX.2 Additional federal circuit courts have ruled that analogous federal civil rights statutes that prohibit sex discrimination also prohibit discrimination on the basis of gender identity.3 The Department of Education is responsible for enforcing these decisions and accepting complaints that allege civil rights violations.

Far too many transgender young people experience discrimination at school that impedes their ability to learn and succeed. GLSEN’s National School Climate Survey found that LGBTQ students who experienced such discrimination were more than three times as likely to have missed school in the past month, had lower GPAs, and had lower self-esteem and higher levels of depression.4 Additionally, a recent study conducted by the Human Rights Campaign Foundation and the University of Connecticut of 12,000 LGBTQ youth indicates that more than a third of transgender students try to never use the bathroom during the school day—often because of a lack of access to facilities that match their gender identity and a lack of safety in facilities that don’t. This poses serious health risks to students, including kidney infections, dehydration, and urinary tract infections, and it compromises their educational opportunities due to being absent or dropping out of school as a way to avoid humiliation and pain.

OCR’s refusal to even investigate these complaints conflicts with the law in multiple jurisdictions, further emboldens those who seek to discriminate, and betrays the vulnerable students you have sworn to protect. We urge you to reconsider and correct this injustice immediately.