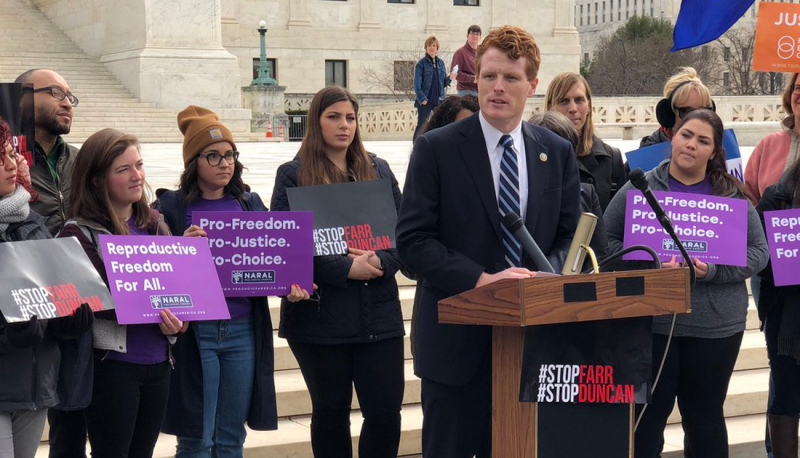 On March 6th, PFAW and allies rallied in front of the Supreme Court to show our opposition to Trump judicial nominees Thomas Farr and Kyle Duncan. Kyle Duncan, nominated to the 5th Circuit Court of Appeals, and Thomas Farr, nominated to the Eastern District of North Carolina, are both shockingly unfit for lifetime appointments to the federal bench.

As an attorney, Duncan served as lead counsel in the Hobby Lobby case opposing the Affordable Care Act’s contraceptive coverage mandate. He represented the Virginia school district that discriminated against transgender high schooler Gavin Grimm by prohibiting him from using restrooms consistent with his gender identity.

And both Duncan and Farr defended a discriminatory voting law that, according to a federal court, “target[ed] African Americans with almost surgical precision.” Evidence also suggests that Farr was involved with a voter intimidation campaign in North Carolina.

At the rally, PFAW Senior Director of Outreach and Public Engagement Diallo Brooks spoke about how our Courts must be a bastion of hope for America. Stating that nominees do not represent that and we will be out here fighting for what is right.

“We’ve come to far to go back. These Trump nominees before us don’t represent America and they don’t speak for Americans.” @DKBrooks45 #StopDuncan #StopFarr pic.twitter.com/S7n1wMRxfx

There was also a powerful speech by the mother of a transgender son, who spoke about how she can’t believe that someone as anti-LGBTQ as Kyle Duncan is up for a lifetime judicial nomination.

POWERFUL speech by Nicola, who is a mother of a transgender son and spoke about how she can’t believe that someone like Kyle Duncan who is anti-LGBTQ is up for a judicial nomination. #CourtsMatter #StopDuncan pic.twitter.com/RRrVe2jqkh

As the mom of another transgender boy put it, “We must work to stop people like Duncan and Farr so they won’t have a platform to use their hate.”

“We must work to stop people like Duncan and Farr so they won’t have a platform to use their hate.”

PFAW and our allies have been sounding the alarm about these unacceptable nominees and mobilizing our members online. We continuously bring our fight to the Hill to make sure the Senate Judiciary Committee does the right thing and demand the removal of these nominees.