PFAW and Allies Rally for Democracy at the Supreme Court

As the Supreme Court heard arguments today in McCutcheon v. FEC – a campaign finance case in which the Court will decide whether to strike down overall limits on direct political contributions – a great crowd of PFAW and allies rallied outside the Court in support of getting big money out of politics.  From students and small business owners to members of Congress – including Senator Bernie Sanders and Representatives Ted Deutch, Jim McGovern, and John Sarbanes – people from all backgrounds came together in support of protecting the integrity of our democracy. 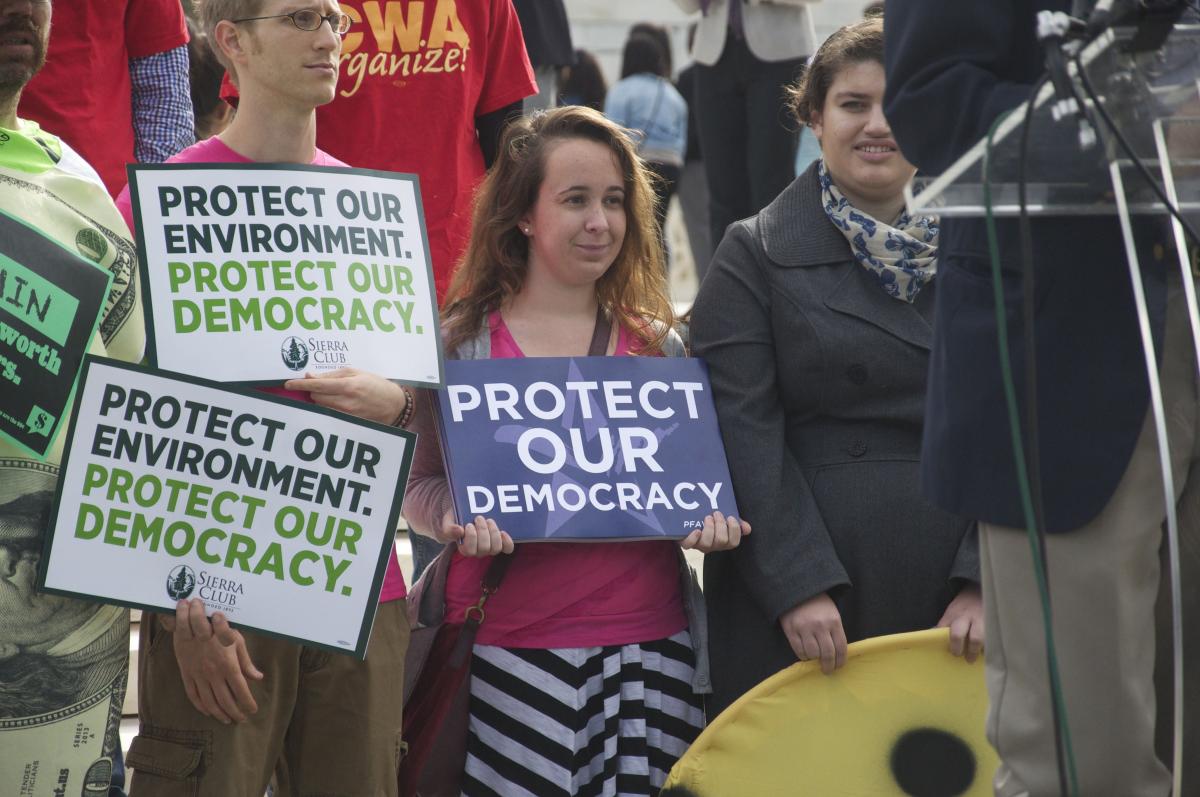 PFAW Executive Vice President Marge Baker kicked off the speeches by painting a picture of the “people versus money” nature of the case:

Inside the court – right now – one wealthy man is asking for permission to pour even more money directly into political campaigns. But we’re here, too, and we have a different ask.  We’re asking the justices to protect the integrity of our democracy. We’re asking them to protect the voices and the votes of ‘We the People’….We’re here today saying loud and clear: our democracy is not for sale. 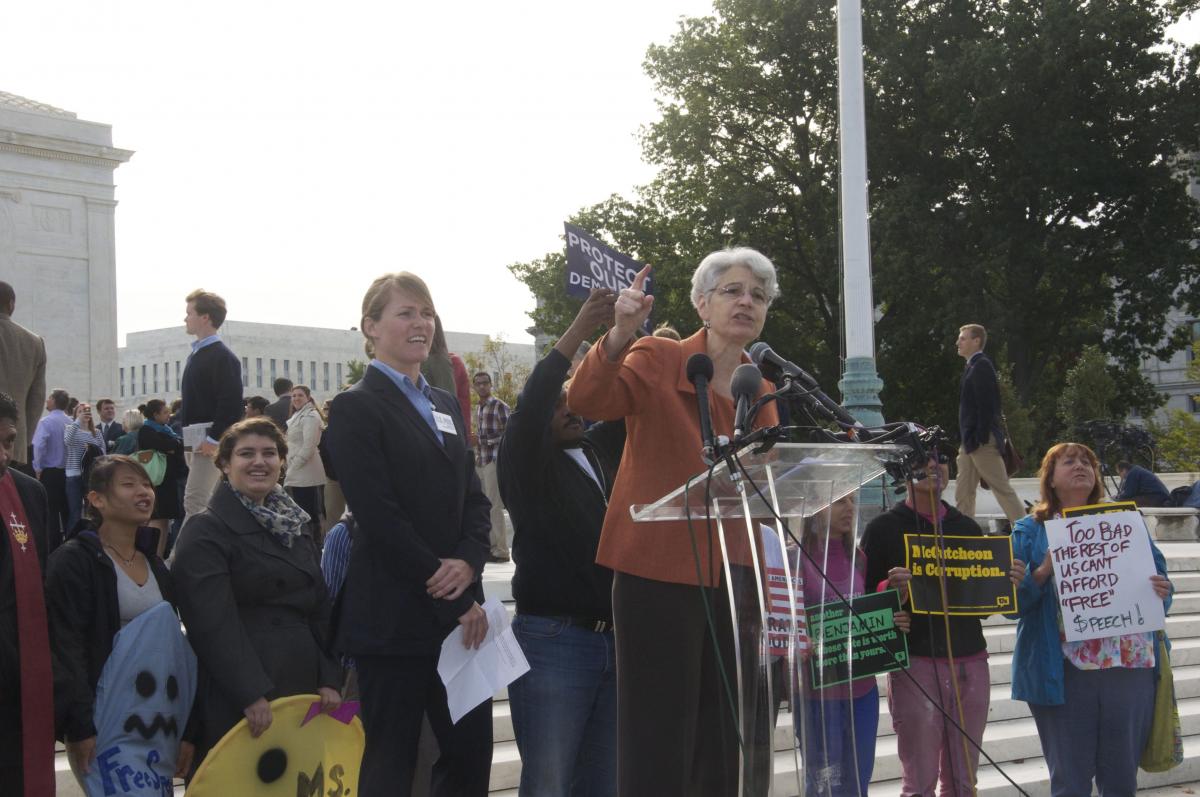 As a young minority elected official, let me tell you: this [case] is extremely troubling….Young minority candidates throughout this country are routinely outspent and therefore denied the ability to serve in elected roles….Money should not determine who serves in office. 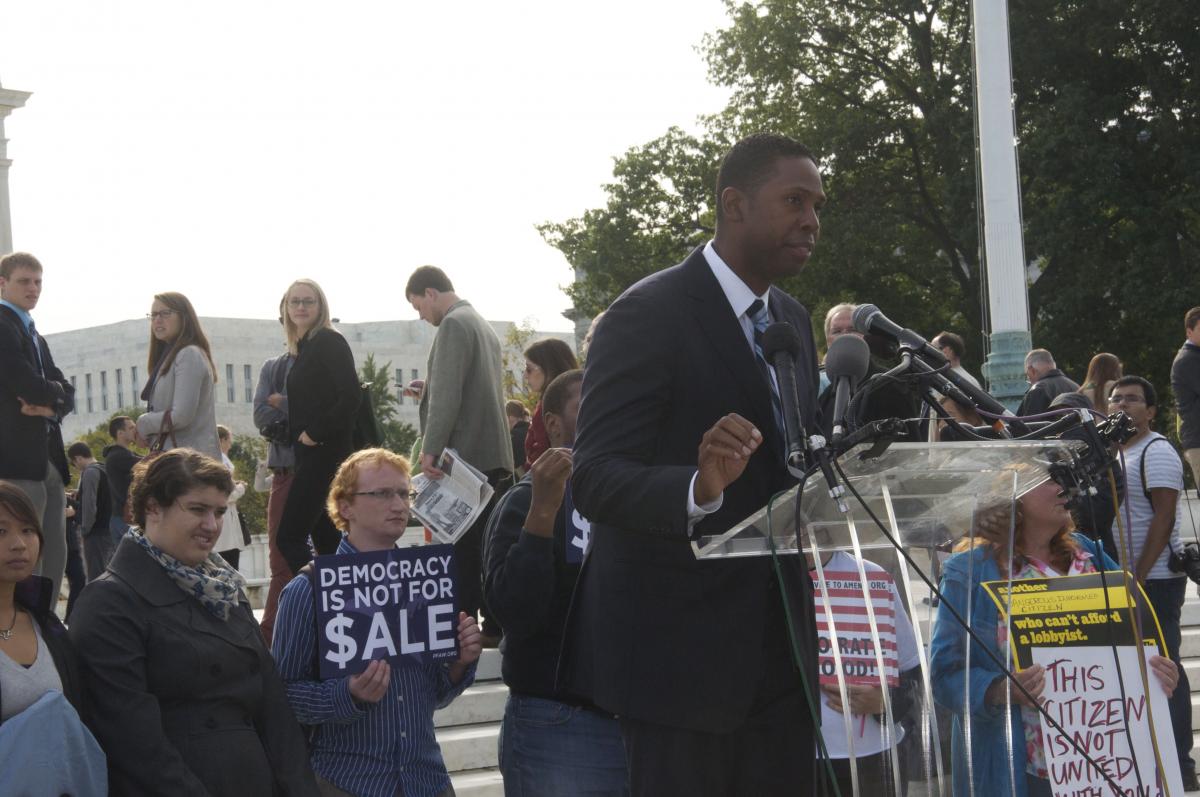 Howard University student Brendien Mitchell, a fellow in affiliate PFAW Foundation’s Young People For program, talked about the importance of being able to hear the political voices of young people in the midst of voter suppression efforts and massive spending by the wealthy in our democracy:

What about the freedom of young Americans who cannot donate grandiose sums of money to political candidates?….We gather to say that this is our country.  And that in a case of money versus people, the answer should be apparent: the people. 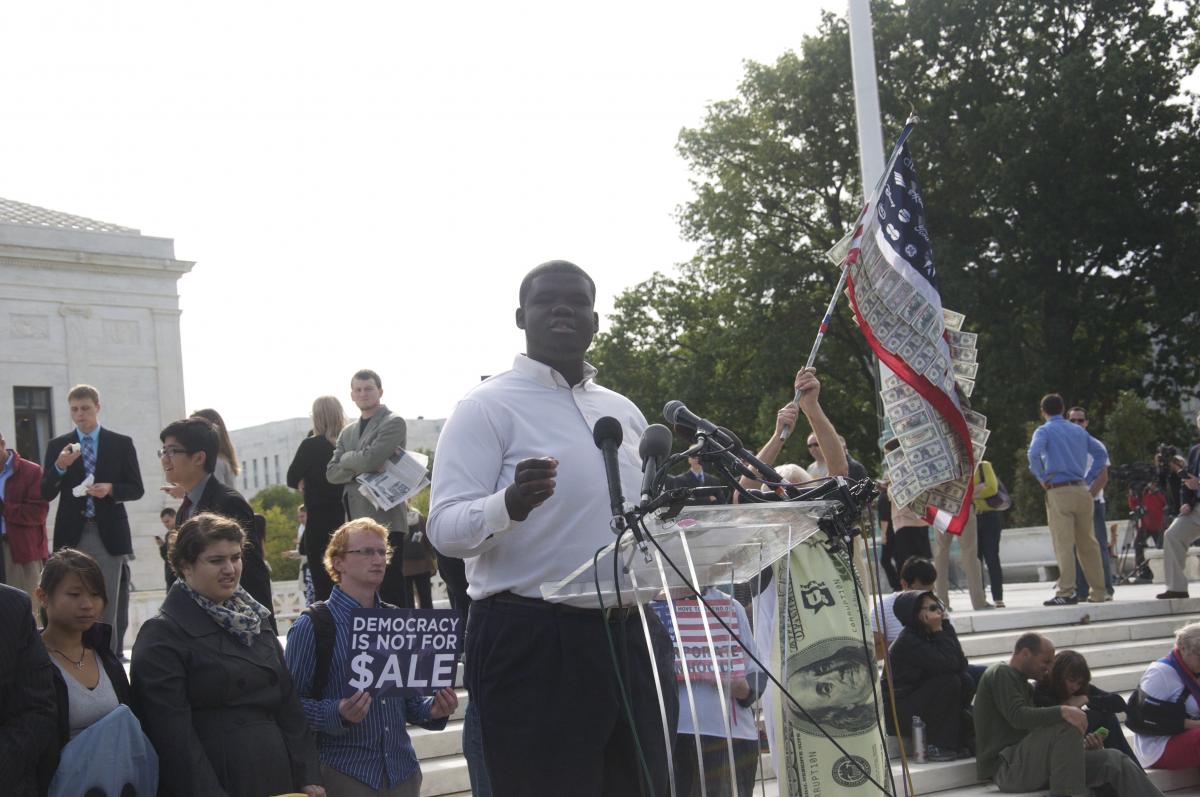 One of the highlights of the day was hearing from Moral Monday demonstration leader Rev. Dr. William Barber, II, president of the North Carolina State Conference of the NAACP and a member of PFAW’s African American Ministers in Action.  Rev. Barber highlighted the millions of dollars Art Pope has poured into conservative projects and campaigns in his home state of North Carolina:

We [in North Carolina] know firsthand that when you undermine laws that guard against voter suppression, and you undo regulations on the ability for corporations and individuals to spend unchecked amounts of money to influence and infiltrate and literally infect the democratic process, it has extreme impacts. 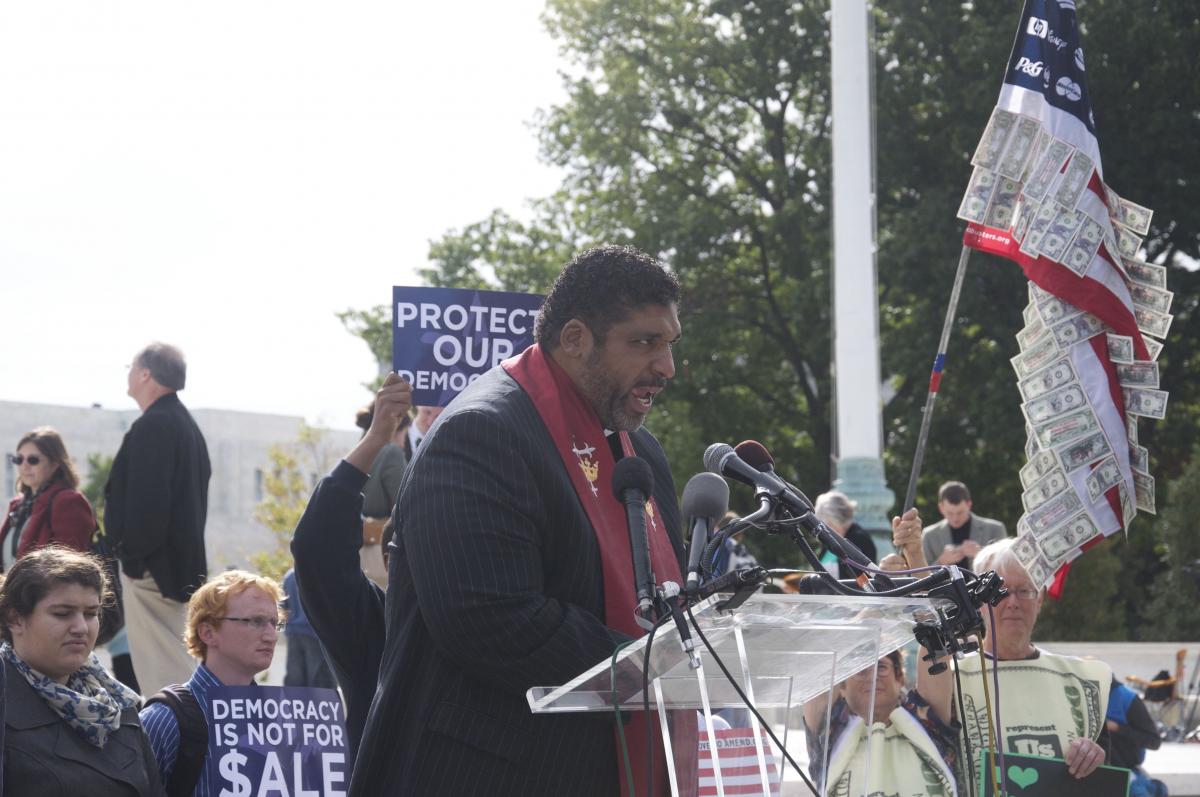 Extreme impacts – and not only on the electoral process itself, but also on a whole host of issues shaping the lives of everyday Americans.  Whether you care most about protecting voting rights, preserving our environment, or workers getting paid a livable wage, a political system where the super-rich can make six-digit direct political contributions harms us all.

And that’s why organizations and activists with focuses ranging from civil rights to environmental protection to good government issues came together today with a common message: our democracy is not for sale. 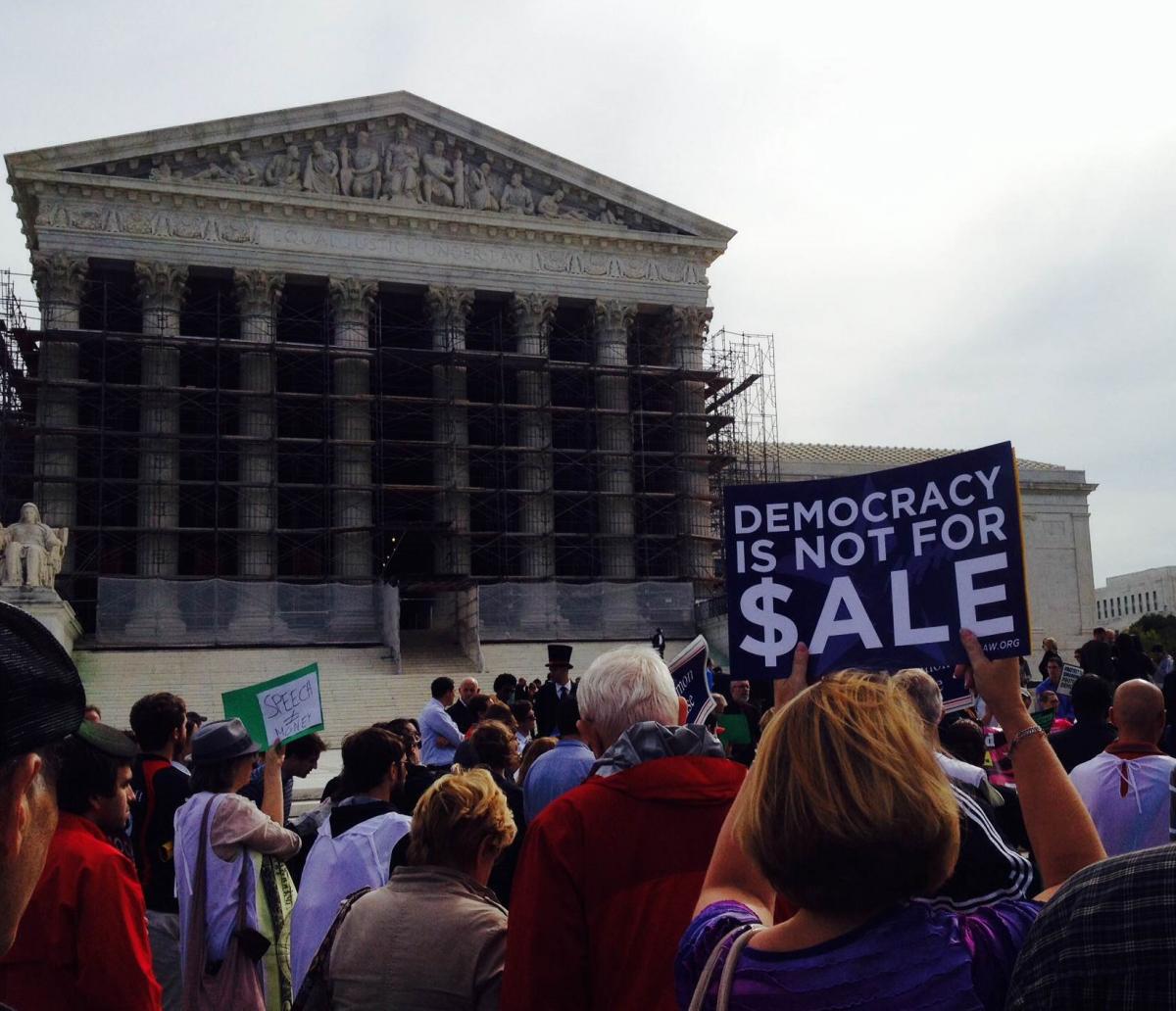