People For the American Way is proud to endorse three dynamic 2018 gubernatorial candidates—all young, all people of color, and all running in winnable states against right-wing Republicans (who all, unsurprisingly, happen to be white men). The endorsements were announced at a press event on Wednesday where the candidates—Stacey Abrams of Georgia, Andrew Gillum of Florida, and David Garcia of Arizona—engaged in a panel discussion on what makes their strategies stand out, the future of the Democratic party in post-Trump America, and how to engage with Trump voters while maintaining progressive values.

Although PFAW does not typically endorse during primary races, we felt that these candidates were exceptional examples of the kind of leadership that we need across the states. As Political Director Lizet Ocampo stated, “Diverse candidates are innovating at the state level, mobilizing multiracial and multi-ethnic coalitions, channeling the resistance, and proposing new and innovative solutions to our biggest problems.”

When David Catanese, a senior writer with U.S. News & World Report, asked the candidates about reaching out to Trump voters without sacrificing their progressive ideals, Abrams responded that “it’s about authenticity. There is no reason to abandon progressive values to win any voter. Voters want to know that whoever they elect to lead has the capacity to lead, the integrity to lead, and a plan for leadership that includes everyone.”

Later on, Vanessa Williams of the Washington Post asked about how the intraparty debate between more moderate Democrats and progressives on the left is playing out in the candidates’ states. Gillum referenced his experiences with donors who expect that a candidate for governor in Florida needs to look, act, and speak in a particular way. Gillum thinks there are far too many “thermometers” in politics—people who just read the temperature. Instead, “thermostats set it, and sometimes setting the temperature means you get out there not being fully certain where everybody’s going to land on what you’re proposing or what you have to say, but you have to go there anyway because the situation makes it necessary.”

One of the final questions came from James Wright with the AFRO-American. The reporter wanted to know what Garcia’s campaign was doing to encourage Arizona’s Black population—which makes up three percent of the state—to vote for him in the primary. Garcia emphasized that “the Black community in Arizona has the same wishes as any other community in the state and that is making sure we have opportunities for a strong work force, quality public schools serving their communities.” Garcia said that he is also ensuring that the Black community has representation within his campaign, and that they are listening to all voices.

Watch a recording of the event from the National Press Club below: 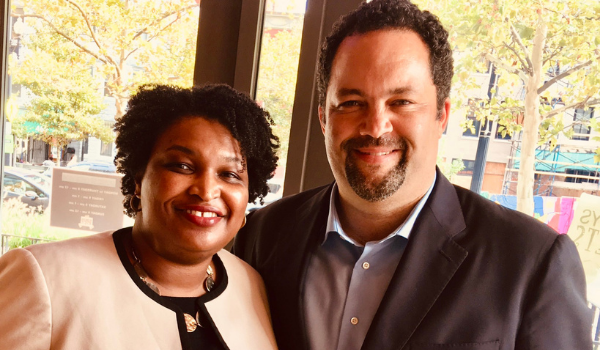 A Conversation with Stacey Abrams and Ben Jealous