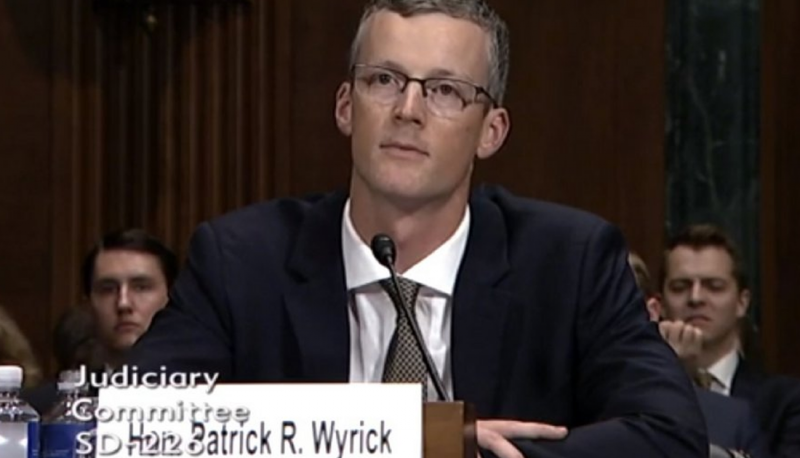 Patrick Wyrick’s May 23 hearing did not allay People For the American Way’s deep concerns about his nomination to be a district court judge in the Western District of Oklahoma. PFAW has now opposed Wyrick and sent a new letter to the Senate Judiciary Committee. Wyrick’s committee vote is scheduled for June 14. You can download our letter here.

On behalf of the hundreds of thousands of members of People For the American Way, we write in opposition to the nomination of Patrick Wyrick to be a district court judge in the Western District of Oklahoma.

Despite his youth and relatively short time practicing law, he has been added to President Trump’s list of potential Supreme Court nominees.i Therefore, his nomination warrants increased attention. Unfortunately, in his hearing testimony and follow-up written answers, he failed to assuage our deep concerns about his record, his approach to interpreting the law, and his willingness and ability to prevent his personal ideological views from affecting his judicial decisions. In fact, some of those responses magnify the concerns we have previously expressed.

As a threshold matter, Wyrick’s presence on Trump’s Supreme Court list raises concerns about his qualifications, since the president promised to apply a litmus test to any high court nominee: opposition to Roe v. Wade and the constitutional right to abortion.ii The hearing did not reveal how it is the White House is confident that the nominee passes this test, nor was there any reliable indication that he doesn’t oppose Roe v. Wade.

Our nation’s courts exist to protect our legal rights, and they are perhaps never more important than when the government seeks to curtail a core constitutional right. Those to whom we entrust the solemn responsibility of a lifetime judicial position must recognize that the liberty protected by the Fifth and Fourteenth Amendments is expansive—and that it includes the right of women to make their own reproductive choices.

Wyrick has spent a significant portion of his career using his legal training and abilities to further a sharply conservative legal agenda. He chose to leave private practice to become a political appointee in Oklahoma. In other words, he chose the client that allowed him to pursue the legal arguments he believes in. He spent several years as Oklahoma’s solicitor general before being appointed to the Supreme Court in 2017.iii He used his advocacy position in a number of ways that are of concern.

He has a record of repeated efforts to impede women’s ability to exercise their right to choose abortion. As one example, he defended a law prohibiting doctors from using the standard regimen for non-surgical abortions. Its unconstitutionality was so obvious that the Oklahoma Supreme Court found it facially unconstitutional in a one-page per curiam opinion.iv Wyrick also argued for a law prohibiting women from obtaining an abortion until they first obtained an ultrasound that would serve no medical purpose. That, too, was struck down by the Oklahoma Supreme Court as plainly unconstitutional in an extremely brief per curiam opinion.v

The environment is another area of concern. As solicitor general, he partnered with then-attorney general (and current EPA director) Scott Pruitt in several cases challenging the ability of the EPA to protect the environment as Congress has directed it to do. For instance, he challenged the EPA’s plan to protect scenic vistas in certain national parks under the Regional Haze Program of the Clean Air Act;vi he challenged clean air standards for oil and gas drilling and production sites under the EPA’s rule, “Oil and Natural Gas Sector: Emission Standards for New, Reconstructed, and Modified Sources;”vii he sought to have the courts strike down the Obama Administration’s Clean Power Plan setting carbon pollution standards for both new and existing power plants;viii and he was involved in email exchanges in which power industry lobbyists drafted the office’s talking points, letters, and even the office’s formal comments in federal environmental rulemaking proceedings.ix

In fact, Wyrick doesn’t simply believe that many EPA regulations go beyond the authority granted to it by Congress. He believes that in any number of areas, not just the environment, the Constitution prohibits many if not most actions by federal agencies starting with the New Deal. At a 2016 panel discussion at the Antonin Scalia Law School,x he asserted that “the whole administrative state is unlawful.” He informed his colleagues that he was in the “Phil Hamburger school,” a reference to Columbia Law School Prof. Philip Hamburger, author of the 2015 book “Is Administrative Law Unlawful?” Hamburger’s answer is yes, and apparently, so is Wyrick’s.

That is an extreme legal theory that would harm all Americans.

In his response to committee members’ written questions, Wyrick claims that he was not speaking on his own behalf, but as an advocate for Oklahoma about arguments he was making or considering in litigation.xi But that explanation is contradicted by the conference video, which makes clear these were his own views, that he said that “I am” personally in the Hamburger school.

He also states that as a lower court judge, he is bound by Supreme Court precedent that has upheld the authority of Congress to create regulatory agencies addressing any number of issues that are national in scope as within the powers enumerated by the Constitution. While it is true that district court judges are so bound, it is also true that important legal cases are rarely identical to the relevant precedents. Judges who apply the same precedent in a case often disagree on the result nonetheless. Similarly, judges can and do disagree on what “the plain meaning” of a statute is. Wyrick may not be able to overrule Supreme Court precedent, but he could still try to find a way around constitutional interpretations he disagrees with (as he urged judges to do in the abortion cases noted above).

In addition, Wyrick is being considered as a potential Supreme Court nominee, elevating him to a position where he could impose his reactionary legal theories despite current precedent. That reality cannot be ignored by senators considering this nomination.

Yet Wyrick is hardly being cooperative in allowing the Senate to carry out its constitutional responsibility. For instance, Sen. Whitehouse asked several questions about who paid for Wyrick’s official travel when he was solicitor general, requesting the nominee to provide copies of relevant paperwork. Wyrick’s response: “I am no longer an employee of the Office of Attorney General, and thus don’t have access to any files or paperwork relating to such matters.”xii

Had he tried unsuccessfully to get the paperwork from his old office, that might be an acceptable response. But his response to the senator does not state or imply that he made any such effort. Based on his statement, he apparently decided to simply not make the request. This violates the obligation all nominees have to seek to provide the committee with the information needed to evaluate their qualifications for the bench. The forms Sen. Whitehouse requested were not subject to attorney-client privilege or any other doctrine that would warrant a refusal to disclose them. Wyrick’s choice indicates a lack of respect for the committee, its members, and the confirmation process the Senate uses to meet its constitutional responsibilities.

Wyrick is only 37 years old, and he graduated from law school only 11 years ago, making his consideration for the Supreme Court surprising and unusual. However, given this administration’s crusade to transform our federal judiciary into a bastion of far right ideology, President Trump and his supporters clearly expect Wyrick’s judicial decisions to be consistent with the very conservative legal positions he has taken during his career. His record indicates they have reason to be confident. The Senate should not confirm him to a lifetime position on the federal bench, especially when it is intended to be a stepping stone toward the Supreme Court.

We urge senators to oppose the confirmation of Patrick Wyrick.