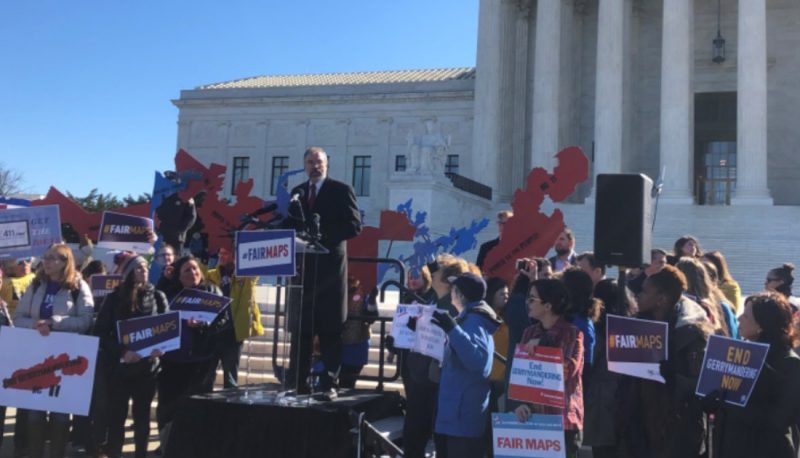 Supreme Court Has a Chance to Limit Partisan Gerrymandering

On March 26, the Supreme Court heard oral arguments in three consolidated cases concerning the constitutionality of partisan gerrymandering. Although this practice has long been used by both parties to redraw districts in a way that favors one party over the other, advances in computer technology have made it much more effective. Although no party has fully clean hands, Republicans in particular have most ruthlessly capitalized on it in a way that has essentially guaranteed that the ruling party cannot be removed from power. The Court has the potential to help make Congress truly democratic by ensuring that voters choose their representatives as opposed to representatives choosing their voters.

In a showing of solidarity against partisan gerrymandering, People For the American Way (PFAW) joined a diverse coalition of organizations and activists who rallied at the Supreme Court in favor of reforming this practice. Some of the organizations at the rally included Common Cause, Public Citizen, and the League of Women Voters.

The first speaker, Karen Hobert Flynn from Common Cause, discussed how gerrymandering takes away from the integrity of elections and encourages politicians to focus on party operatives who have the ability to rig maps for certain actors. Virginia Kase from the League of Women Voters stressed that the issue has crossed party lines and been used as a tool on both sides to disenfranchise voters, stating that, “[t]he Court must put an end to extreme partisan gerrymandering so Americans can trust that their vote counts.”

Next, Rep. Alan Lowenthal, D-Calif., said that the power is shifting in Washington because people are rising up and demanding change. Arnold Schwarzenegger, the former governor of California, shared how his home state was one of the first to introduce an independent redistricting commission and how it had revolutionized elections because politicians started being held accountable to every single person in their district, as opposed to a gerrymandered base.

Rep. Andy Harris, R-Md., admitted that he benefitted from gerrymandering in his own election to office, but stated that the problem has become so pervasive that he felt a personal obligation to fight this practice. Rep. Brendan Boyle, D-Pa., discussed how in the past the Supreme Court had punted on this issue, but stated that it was time to finally put this unjust practice to rest.

Sen. Sheldon Whitehouse, D-R.I., argued that this problem is absolutely essential to fix if we wish to live in a true democracy, but also stated that it was indeed fixable and that he feels hopeful about a Supreme Court decision. One of the final speakers, Rep. Alma Adams, D-N.C., gave a fiery speech about how voting rights are sacred in our country, and urged the Supreme Court to consider America’s history of voter suppression and institutionalized election rigging.