Today, People For the American Way was represented by our General Counsel Debbie Liu at a press conference to oppose the Vitter-Bennett amendment, which would require Census workers to ask all Americans their citizenship and immigration status in the 2010 census. Doing so could discourage minority communities’ participation in the 2010 census, and would result in an inaccurate census. Not only is the amendment unconstitutional, it is a thinly-veiled effort by the radical Religious Right and their counterparts in Congress to target undocumented immigrants. 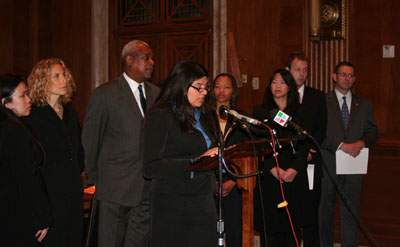 Above, attendees at the press conference to oppose the Vitter-Bennett amendment.

The New York Times featured an editorial citing how changing the census would waste time and valuable resources. Should the Vitter-Bennett amendment pass, the Census Bureau would have to reprint forms, promotional materials and training software:

As required by law, the Census Bureau gave Congress the exact wording of the survey’s 10 questions in early April 2008 — more than 18 months ago. Changing it now to meet Mr. Vitter’s demand would delay the count, could skew the results and would certainly make it even harder to persuade minorities to participate.