Surely we have a lot of fighting left to do, but it’s encouraging that the Senate has introduced a health care bill without the Stupak-Pitts anti-choice amendment, which passed in the House. There’s no doubt that the right-wing will attack this bill, and work fervently to get the anti-choice language into this bill. This summer, People For the American Way alerted you that the right wing was fanning the flames on abortion:

Much of the Religious Right’s organizing energy has been devoted to incendiary and false claims about the administration’s alleged stealth plan to force every health plan to cover – and force all doctors to provide – abortion services. None of these approaches are actually included in the plans working their way through Congress. In fact, anti-choice members of Congress are using health reform to institute a new nationwide abortion ban in private insurance plans taking away coverage women already have.

And guess what’s happened… By now you know that the House recently passed a health care reform bill with the Stupak-Pitts amendment. As you’ve read here before, the Stupak-Pitts amendment prohibits private insurance companies participating in the new health care system (which will be created by the bill) from covering abortion services. Translation: private insurance companies that individuals pay to provide quality health care with their own money cannot provide the option of abortion coverage.

The right wing is already out in force on this. They’ll be lobbying members of Congress and talking to their allies at Fox News, The Washington Times, and news sources across the country spreading lies and misinformation. Our representatives need to hear from us, and know that this is unacceptable. Earlier this week, NARAL and People For the American Way delivered more than 97,000 petitions to Sen. Harry Reid’s office, and the Democratic Senatorial Campaign Committee. More than 97,000 of you have spoken up and called for Sen. Reid to reject the anti-choice language to this bill. Now it’s up to us to make sure it stays this way.

UPDATE: On Saturday night (11/21), the Senate voted along party lines — 60-39 — to move forward the Reid-introduced health care bill for debate.

We have plenty of work ahead in the Senate. If you have not joined our petition, please take a moment to do so now. 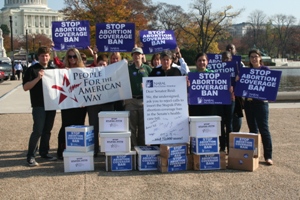